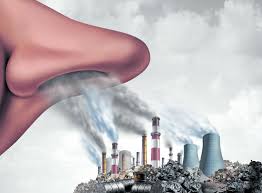 Dealing with air pollution which doesn’t adhere to geographical boundaries
1
Have you ever heard your grand father or father saying that there’s not really fresh and breathable air present anymore and that they missed those pure air days. Well , Air pollution and its harmful effect is not fiction anymore or something going to happen in near future. It is happening right now and we all are equally suffering making our body more vulnerable to the diseases like covid-19.

Air pollution is the process of releasing any toxic particles into the air that lowers its quality. When release rate of air pollutants exceeds the normal capacity of the environment to dissipate , it leads to pollution of environment. It is a widespread problem that affects billion of people around the world and it is causing health hazards to people. It is an issue that is increasing day by day as there is a significant increase in concentration of harmful and toxic materials in the air. A vast variety of human activities are the reason behind this problem becoming life threatening.

According to the state of the Global air 2020 report, air pollution remains the fourth biggest cause of death around the world. From our day-to-day activities, the air gets contaminated with gases, dust particles, fumes, oxides of sulphur, oxides of nitrogen, carbon monoxide, methane, ammonia, toxic metals, smog and acid rain. The most dangerous being particulate air pollutants which are microscopic solid or liquid matter suspended in the earth’s atmosphere.

India is suffering from one of the worst air pollutions. It has become a severe threat to India because out of the 10 most polluted cities in the world, nine are located here. These cities are Delhi, Kanpur, Varanasi, Lucknow, Patna, Gaya, Muzaffarpur, Agra where PM 2.5 average varies from 120-173 microgram per cubic meter then WHO's a recommendation of a maximum 10 microgram per cubic meter. In 2019, India alone witnessed about 16 lakh death due to air pollution. More than 1.16 Lakh Indian infants died from air pollution in the first month of life.

It causes green house gases, acid rain, eutrophication, smog and blaze. Air pollution has resulted in adverse effects on other plant and animal life. It was observed in a study that the crop yield was reduced drastically in areas affected by air pollution. Additionally, it is also becoming a problem for buildings and monuments like the Taj Mahal. It has affected operation of flights because of poor visibility. There are reports of traffic accidents because of smog on the roads.

With Delhi leading in air pollution in the world, it’s air is filled with pollutants. It has been declared as a public health emergency. The stagnant wind cause non dispersion of locally generated pollution, combined with stubble smoke from adjacent cities increase Delhi PM 2.5 level. The particulate matter from the capital is spreading to nearby rural areas affecting them equally.

Because of this problem, the government had to close schools, implement an odd-even vehicle number scheme, and increase parking charges in the capital. There were other measures like a five-day ban on construction and demolition in Delhi and Red light on, Gaadi off the campaign. And recently center has introduced new law through an ordinance to curb pollution in Delhi-NCR, a powerful body that provides for up to five years of jail term and ₹1 crore fine for violators with immediate effect. Since the air pollution in Delhi is caused by adjacent states, the new commission will undertake and implement coordinated actions.

However Environmental lawyer Riturik Dutta said the main purpose of this ordinance was to improve the air quality only in the NCR, unless the central government sets up similar committees in other polluted regions of the country, it violates the right to equality under article 14 of the constitution and discriminates against those who are not in NCR.

There are anti-pollution laws for pan India but they are not well enforced. There is an Air Act (Prevention and Control of Pollution) that was set up in year 1981. It works towards prevention, control, and abatement of air pollution. There are some cities that have banned the pollution sources like brick kilns in the city boundary limits, the exhaust from these still blows over from where they are placed outside the city limits. National clean air programme (NCAP) was launched in early 2019 to control air pollution across the country. A national target is set that will reduce harmful particulate matter concentration by 20 to 30 % until 2024.

Bottom line is that most people believe that they are not a contributing factor to this problem. The nation’s government is blamed for not taking measures to control air pollution and improve air quality.

There will be no effect of any of the government’s action plans till there is an individual effort put in to control this issue. It includes something as small as planting a tree, taking public transport, or using electricity and gas efficiently, proper inspection and maintenance of vehicles, follow PUC norms. This tiny bit of effort can help controlling air pollution in the long run. There needs to be a shift towards greener sources of energy to achieve sustainable development and have a good life quality.