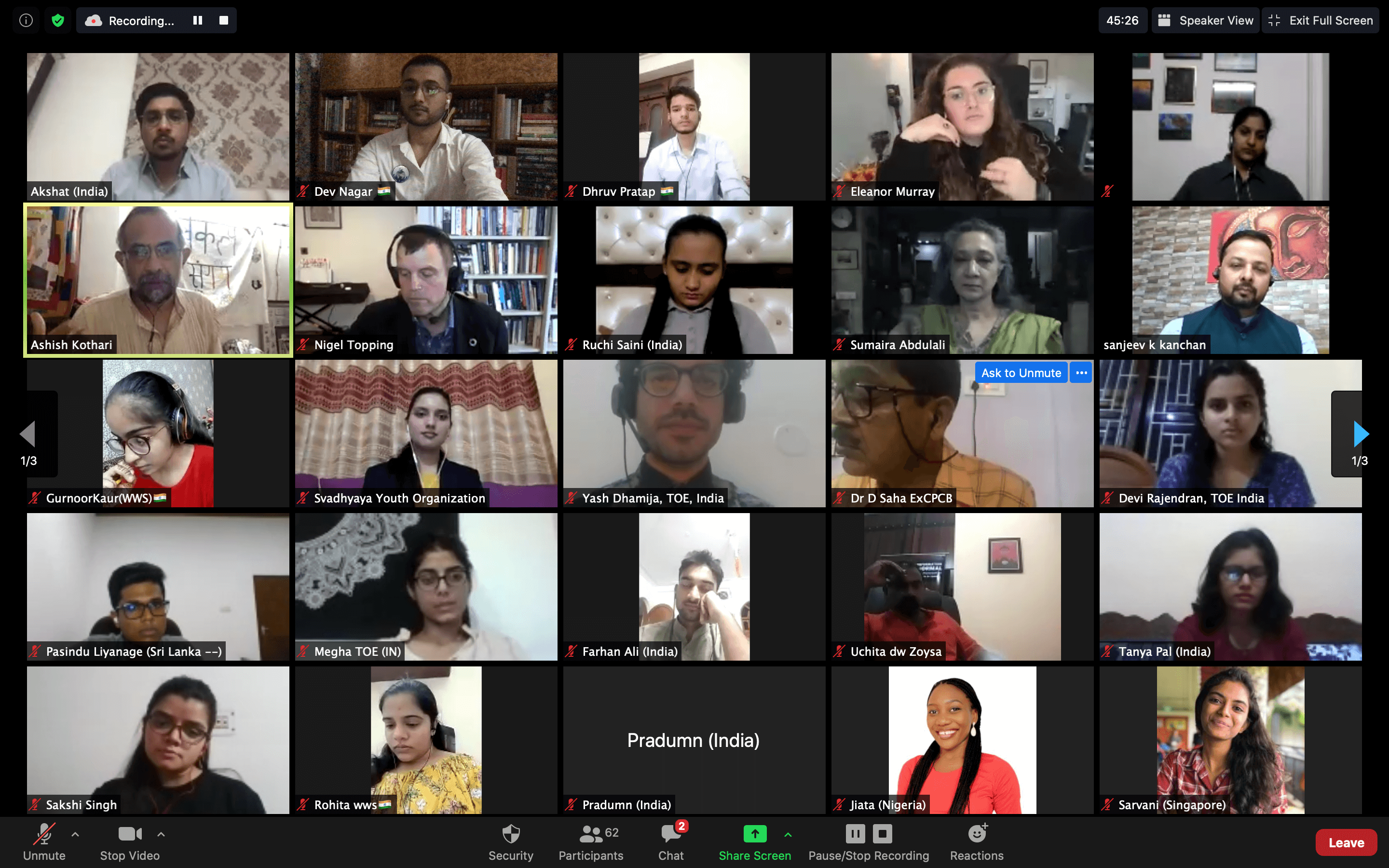 Sustainable Earth Summit 2020: Expert panel discussion on climate change
The panelists respected Miss.Sumaira Abdulali, Mr. Ashish Kothari, Mr.Nigel Topping and Mr. Uchita were introduced to the audience by the moderator Mr.Sanjeev.  The session started, by Mr.Sanjeev posing a question to each moderator, starting with Mr. Nigel Topping.  The question posed to Mr. Nigel “Environmental pollution and climate change are one of the biggest threats […]

The session started, by Mr.Sanjeev posing a question to each moderator, starting with Mr. Nigel Topping.

The question posed to Mr. Nigel “Environmental pollution and climate change are one of the biggest threats to life today. How do you see the world's situation to tackle it?”

Mr Nigel believes that we have been very slow as a global community to tackle the immense challenge of climate change. He also considers himself fortunate to be in a position where he canmake a difference at a larger magnitude. He believes it’s necessary to bring about total transformation in our energy utilisation and generation. He believes the campaign called “Race to 0” must begin and spread amongst as many cities, companies, countries and universities, that they must commit to full decarbonisation. He believes that things are now changing at an exponential rate, and that people are realising the threat imposed upon us due to climate change.

He says that this campaign has become the new norm, and several countries and businesses have committed to net 0 emissions in the near future. And this he views as a positive change, that despite being slow we have successfully been able to mobilize the masses to step up against climate change. He believes that now isn’t the time to criticize each other, instead take action as fast as possible.

The moderator asks how developing economies such as India are impacted when powerful economies like the US try to bring about a reform in their emissions?

Nigel brings up how the US, unfortunately, plans to exit the Paris agreement this year, depending on who gets elected. This he believes is a terrible signal to the world. However, on an optimistic note, he shares that several countries such as Korea, Japan, China, UK have committed to net 0 emissions, and hopes that developing economies would follow in their footsteps. He says how due to industrial competitiveness there has been a drive towards the industrial revolution, which has created economic opportunity.

The moderator then posed a question to Mr. Ashish Kothari, “Being an environmentalist from India, how does he believe India is doing at a global level?”

Mr Ashish kothari believes he has a rather pessimistic view on the industries of India, since they are expanding on non renewable fuels such as coal,rather than solar energy. In addition to this he says this problem at a global level is larger than a carbon crisis or a climate crisis, instead it is on a broader scale a biodiversity crisis. He says all this is slightly connected to racism, since even if the entire world was to transform to renewable energy it would in a way continue to display colonialism.

For example, the green new deal, in the USA and Europe is believed to impollute or change to renewable sources of energy at the cost of seeking, taking materials from elsewhere in the world. He believes it’s necessary to practice clean energy on a broader platform, in a way that no place or community is in danger of colonialism. He insists that it’s necessary that people become self-sufficient, by giving the example of the Adivasi women, who are moving on a clean energy pathway at the ground level.

Mr.Sanjeev then inquires about a citizen's role to a better role?

Mr Kothari believes that citizens must take control wherever they, for promoting ecological betterment. He believes that swaraj and self sufficiency plays an important role. In addition to this he also states that without the mad economic race as well as competition, we would be able to ensure food security and sovereignty, renewable energy etc. He states that several communities have been able to ensure self sufficiency in Covid by being self reliant. It is necessary that people shift from industries to local to ensure  ecological sustainability and socio economic prosperity.

The next question was posed to Mr Uchita, how people play an important role in establishing the SDG’s?

To which Mr Uchita replies by stating that the SDG’s haven't yet reached the masses, and are only understood in bits and pieces. To establish these SDG’s it’s necessary that we promote radical changes at policy level. That people must begin to represent their own communities to ensure radical transformations. The moderator then asks if Mr. Uchita is aware of any success stories where communities have made a difference. To which Mr. Uchita then shares his experiences in Rio, and states that consumption, production and rethinking are the things that matter whilst making radical changes. He also states how challenges against SDG’s such as poverty, climate action continue to be fought.

Next, the moderator posed a question to Miss Sumaira Abdulali, what key policy level improvements can be made to ensure environmental protection in the post covid era?

To which Miss. Sumaira suggests that we must ensure informing the government in such a manner that they feel obliged to take an action for its betterment. She states how as a victim of attack by the sand mafia, she first hand knows how to ensure that the government responds. For this people must constantly generate data, inform and stand up together. She states how sand has now been recognized by the UN as the 2nd most extracted material. In addition to this she also states how one must be equipped with the solutions to the problems one is stating, in order to be heard. She says everyone must spread awareness on climate change and continue to believe in the environment.

The moderator then poses the question, “Being from an NGO, how does she think, public campaigning is necessary for a difference to be made at a global level?”

To which Miss. Sumaira answered that only public campaigning drives any radical change. She asserts that the environmental problem is approaching fast and it’s necessary that the masses mobilize and act collectively in order to bring about a change not only in their lifestyles but also a change at the global level. She believes that it isn't only the environmentalists who must work together to bring about this change, rather this change should be a collective effort of the individuals of various professions.

She in fact believes that environmental issues can be utilized as business opportunities. She asserts that a stitch in time saves nine, we must prefer long term investments over low-cost shortcuts, and repeats that we must remain motivated to bring about change to various environmental issues. And concludes her statement by saying that we all have a vote in the state of our environment, and we must utilize it.

The next section of the session was a short QnA:

With sahithi leading the Q&A session where she inquired about what drove sumaira ma’am to continuously and optimistically opt to drive for change, and campaign against sand mining, despite being attacked several times? To which ma’am shared her experience and journey, of campaigning against sand mining. She replied with an extremely motivating line,  “when that kind of thing, happens to you, you can decide whether you want to back down because you’re threatened or, we can think , someone was ready to kill me for this, so there must be more to it, and you must find out.”

The next question for Ashish kothari sir was, to ask the possible reasons for unsustainable development. To which sir replied that sustainable development is an oxymoron. He says how sustainable living is a more apt word. Along with this he shared examples of various communities in villages who live sustainably. He believes it’s necessary to bring about a positive cultural change for example riding bicycles etc., by digging back into our own community roots.

Dr. D.Saha, agrees with Mr. Kothari, and shares his views on the current state of the environment. Megha from TOE asks Mr.Kothari regarding his views on the EIA draft as well as on how the same minister holds portfolios of both the MOEFCC and the ministry of heavy industries. Mr. Kothari agrees that this is infact a conflict of interest, that the minister of environment is often placed in the position in order to allow various projects to be granted permission (rubber stamps). He then further discusses how the transparency in various ministries has decreased. He also states that we all must wake up and challenge the fundamentals which make the government behave in this manner, by combining alternatives and resistance.

The next question to Mr.Nigel from Yash (TOE) and the role of symbolism to promote sensitivity towards the environment. To which Mr.Nigel believes that it is necessary to empathise, embrace cultural sensitivity towards nature. He further explains this by citing an example of the people of Fiji, where diverse stakeholders sit in a circle sharing stories, creating a cultural experience of listening.

Further Eleanor asks a question to Mr.Nigel, If there’s room in his work for recognition of colonialism of the colonialism of south by the north. To which Mr.Nigel replies that it’s necessary we move ahead of historical asymmetry and make use of opportunities to move forward.

This is followed by Mr.Uchita giving a short brief of his views on the new world order. He believes that all youth must become compassionate and work for the betterment of the environment.

Pradumn then poses a question to Sumaira ma’am on the role of education for disseminating awareness. To which ma’am replied that it is necessary to bring env education into the system, however to also go further beyond that and become compassionate about it. Mr. Kothari adds up to this that hybrid systems must come up in educational systems.

Concluding remarks by Mr.Sanjeev stated how all global problems are interconnected and that the youth must remain optimistic to ensure radical change in the system.

(SVADHYAYA: Pioneering Youth-Led & Community Centric Strategies To Drive Climate Action" We aim to facilitate young leaders from all over the world with a motive to pioneer strategies and establish mutually supportive networks to help drive community climate action. Through this Summit, we are strongly determined to drive youth against Climate Change.)