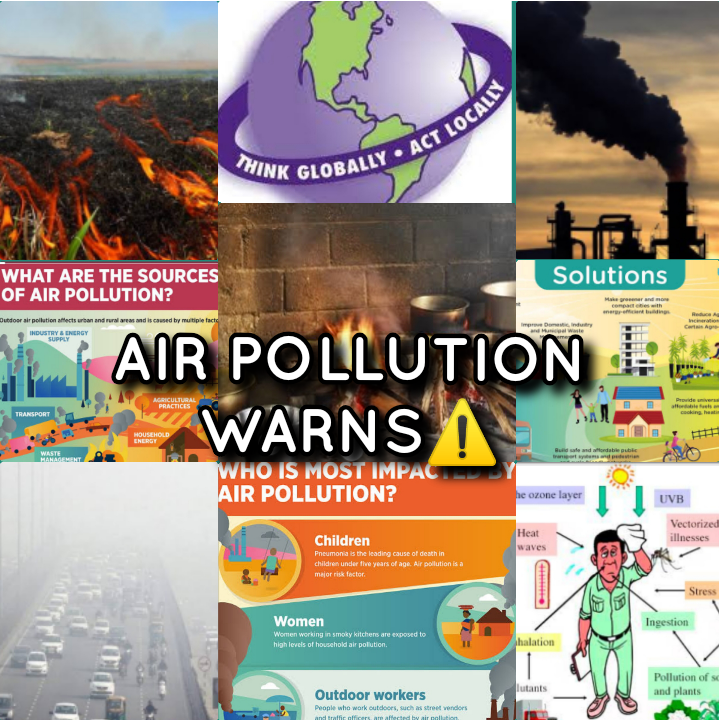 ‘Alert for India and its cities: Air Pollution warns’
I researched and picked up some major points about how Air Pollution is making our present bitter and also will continue to cause harm to our upcoming future,if not reduced.

Delhi, Lucknow, Kanpur, Varanasi, Agra, Patna are some of most polluted cities in the world out of 30 in India. As per a study based on 2016 data, at least 140 million people in India breathe air that is 10 times or more over the WHO safe limit and 13 of the world's 20 cities with the highest annual levels of air pollution are in India.

Government is struggling to introduce measures to combat the problem.

Though Delhi CM Arvind Kejriwal is trying hard to reduce the air pollution crisis in Delhi. We can see the seriousness of his actions by his actions, as he wants to solve air pollution by Science by bio-decomposing all the STUBBLE instead of BURNING which is one of the main causes of this issue in most of the cities where agricultural farming occurs.

He also developed a GREEN APP to control pollution in Delhi. Now authorities can take action against pollution activities notified by citizens through this app. He is also going to start an anti-dust campaign to settle the dust in construction sites.

In the new policy, if any agency cut one tree, they have to plant minimum 80 trees.

We already know Air pollution is considered as the major environmental risk factor in the incidence and progression of some diseases such as asthma, lung cancer, ventricular hypertrophy, Alzheimer's and Parkinson's diseases, psychological complications, autism, retinopathy, fetal growth, and low birth weight.

Coming onto the suggestions of the Dr.Arvind Kumar, a chest surgeon at New Delhi’s Sir Ganga Ram Hospital, has a ringside view of the toll that northern India’s deteriorating air quality is taking on its residents. When he started practising 30 years ago, some 80 to 90 per cent of his lung cancer patients were smokers, mostly men, aged typically in their 50s or 60s.

But in the past six years, half of Dr Kumar’s lung cancer patients have been non-smokers, about 40 per cent of them women. Patients are younger too, with 8 per cent in their 30s and 40s.

According to Dr. Kumar, the dramatic shift in the profiles of lung cancer patients has a clear cause: air fouled by dirty diesel exhaust fumes, construction dust, rising industrial emissions and crop burning, which has created heavy loads of harmful pollutants in the air.

“That was a turning point,” says Ms Narain, who has battled India’s air pollution for decades. “There is outrage now against pollution — it is also now much more of a middle-class issue and government is acting because it understands the public health emergency.”

And then the Lockdown, the clampdown on all non-essential activities due to the COVID-19 pandemic, from March 25 to June 8, led to a significant decline in air pollution levels for major cities across India, this gave us temporary relief.

'To have a permanent relief of such a major problem like Air Pollution, we should know the necessary data for the control',and then we need to understand the crisis to overcome the disasters happening in present and control the upcoming future of generations of all kinds of living beings on this planet by preventing it.

The biggest causes are:
1-Vehicular pollution
2-Industrial emissions
3-Thermal power plants
4- Construction dust
6-Stubble Burning
5- Waste burning and millions of poor households' use of cheap and dirty fuels such as wood and cow-dung for cooking.

Meanwhile, liquid petroleum gas and electricity, along with biogas and ethanol are some of the clean energy alternatives.

“India could cut its total air pollution by one third overnight by giving clean cooking stoves to all its villagers,

As we all have heard - THINK GLOBALLY,ACT LOCALLY

There are many small, but critical sources of air pollution in our homes and neighborhoods. Such sources — vehicles, construction equipment, lawnmowers, dry cleaners, backyard fires, and auto-body shops — are located where we live and work. Total emissions from these smaller but widespread sources are significantly greater than all the industrial sources in the state combined

One should take measures from their own homes and surroundings first. If every one of us plans to take preventive measures, we can at least protect our surroundings and can breathe healthy air, and can have a better environment.

Last but not the least we should -

To spread the awareness of this critical condition, Youth can play a major role by leading and guiding people for the awareness of the situation. The educational organizations, foundations, and government leaders should take part actively to influence more and more people and let them know about such facts through - Social media, radio and TV advertisements, and also by organizing initiatives to promote the awareness, causes, and solutions of Air Pollution.