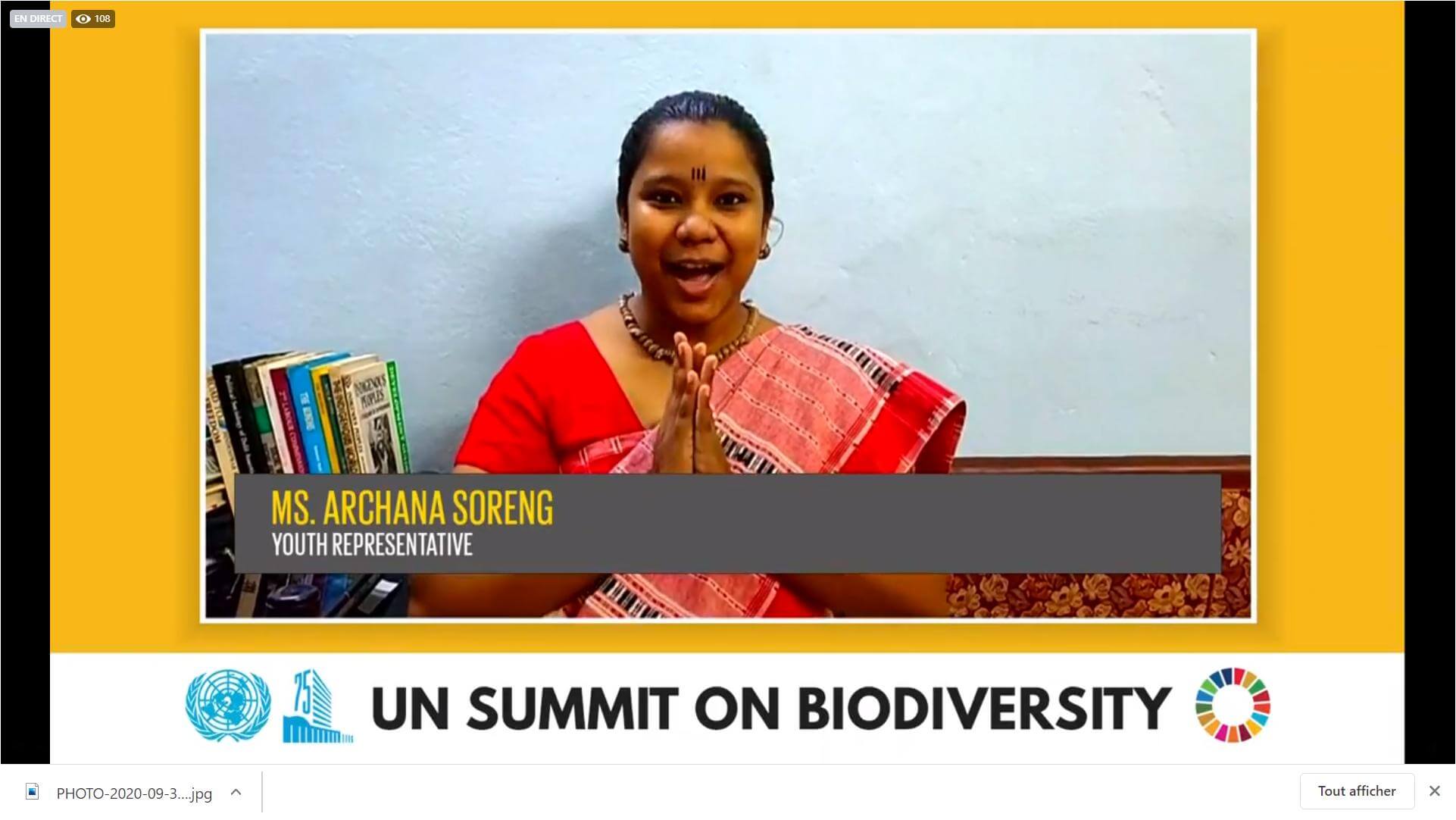 The United Nations Summit on Biodiversity was convened by the President of the General Assembly on 30 September 2020, at the level of Heads of State and Government under the theme of “Urgent action on biodiversity for sustainable development”

It provided an opportunity for Heads of State and Government and other leaders to raise ambition for the development of the post-2020 global biodiversity framework to be adopted at the 15th meeting of the Conference of Parties to the Convention on Biological Diversity, to be held in 2021.

The Opening Segment of Summit on Biodiversity started with the address of the H. E. Mr. Volkan Bozkir, President of the 75th session of the General Assembly, followed by the address of H.E. Mr. António Guterres, Secretary-General, United Nations.

I was one of the seven members of the UN Secretary General’s Youth Advisory Group on Climate Change, hailing from Khadia Tribe an Indigenous Community from India to address the Opening Segment of the Summit on Biodiversity as the sole Youth Representative in Summit.

In Light of my participation in the General Assembly, I had initiated a Consultative Process with different stakeholders starting with an Inter-Generational Consultation Process with my Alma mater Tata Institute of Social Sciences on 7th September.

I highlighted the following messages in the Summit on Biodiversity:

For centuries being responsible stewards of biodiversity, we have confronted environmentally destructive projects pursued by states and corporations. Though we are protecting, yet our rights are being violated in the name of biodiversity conservation. We will be able to continue to protect biodiversity only when we feel secure, for which it is important to respect, recognize and enforce our rights over our land and forest.

Second, we need to revisit our ambitions and approach to conservation and protected areas.

Doubling protected areas to cover 30% of the globe, as some want to see in the Post-2020 Global Biodiversity Framework, will lead to immense human rights violations. It could constitute the biggest land grab of world history reducing millions of people to landless poverty – all in the name of conservation. Removing Us from our land in order to protect ‘nature’ is deeply colonial and environmentally damaging. We should be the leaders of Conservation – not victims of it.

My third and the last message to world leaders is that: We, Youth are your biggest allies to protect the future of our planet and reverse biodiversity loss.

We are and will be facing the impacts of the biodiversity crisis. Despite this, we remain marginalized, unrecognized, and underrepresented in decision-making spaces. More proactive steps are the way forward to ensure intersectional and intergenerational equity.

We are tired of countless environmental pledges, agreements, and failed commitments. All I want to say is that we are ready to work with you to reverse the biodiversity loss. The question is: “Are You?”