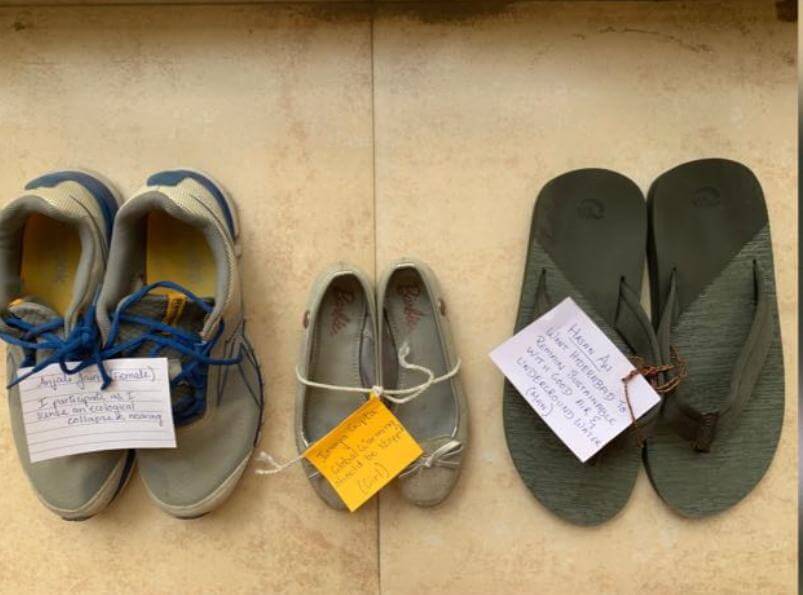 Take part in the Shoe – Strike for Climate Justice without leaving home!
1000 plus shoes have already been collected by us from willing Hyderabadis supporting this strike and their specific demands. Instead of the strikers, their shoes will do the talk this time.

In a first of its kind Environment Strike in India, we, Fridays for Future Hyderabad which is an initiative of Children and Youth Climate activists of Hyderabad will be taking part in the Global Climate Strike on September 25, 2020 along with over 7 million strikers across the world. 1000 plus shoes have already been collected by us from willing Hyderabadis supporting this strike and their specific demands. Instead of the strikers, their shoes will do the talk this time.

What are we demanding from Telangana Government?

Angel Vinod, 23 years old who is a student and Climate Activists aptly says “Wetlands and forests are crucial to our survival. We cannot keep increasing infrastructure while ignoring ecology. The government has all the tools and funds to restore/conserve these and it is their duty to do so”

The concept of development is followed by the Telangana government is unsustainable. It revolves around the idea that only humankind deserves to develop at the cost of all other life forms. The problem with this approach is that it destroys the natural topography and well established functional eco-systems that took eons to develop in a matter of a few years. This damage is irreversible and will be the cause of making Hyderabad inhabitable in time.

How else would you explain solving traffic crisis by mindlessly cutting more than 50 plus-year-old trees for road widening, knowing very well that this is a short-term solution? Fast Mobility at the Cost of our Lungs!

Recently, a celebrity-endorsed converting a lush green forest into an urban park. This is a cardinal sin because we are forgetting that we are in the midst of a climate crisis and forests are the only solution, mankind has to mitigate this. Staying fit by jogging in the park, doesn’t matter if we are opening the gateway to more zoonotic viruses like Covid-19!

“Conservation is a true development. The only way we survive is by co-existing with our ecosystems naturally. Let's cherish the key of our existence” says 28-year-old Priyanka Kota, Social activist.

Hyderabad was once a city of lakes with 3000-7000 waterbodies. Now barely 100-500 remain. Instead of restoring them and making them alive, the government would rather fence them and build walking tracks. These lakes with the right effort and political will could be large reservoirs of water to take care of the localities around it. Beautify it, while encroachment in its catchment area continues to flourish.

Let's go boating, so what if we face the threat of drought & farmer suicides as the underground water is completely depleted! The irony is that Osman Sagar, a heritage lake that has completed 100 years in 2020 and was built during Nizam Era after the Great Musi River flood of 1908 to prevent future droughts, is barren now, even though Telangana is receiving surplus rains since the past 3 years.

As 27-year-old Arpit, a Teach for India Alumni puts it “Forests are Green, Lakes are Blue, But Concrete and Eco-parks Don’t make them so new
Hyderabad demands its old view”.

Sreecharan Gullapalli, 35, Data science researcher interested in Climate Change AI “The climate crisis and the call for climate justice must not be forgotten. We want everyone to realize the extent of what is happening as climate impacts unfold.”

Hence, we Youth and Children of Hyderabad, Strike on September 25, 2020 to let the government know that the citizens cannot be fooled and understand that “The Swanky Urban Dream that they are painting Precedes A nightmare”.