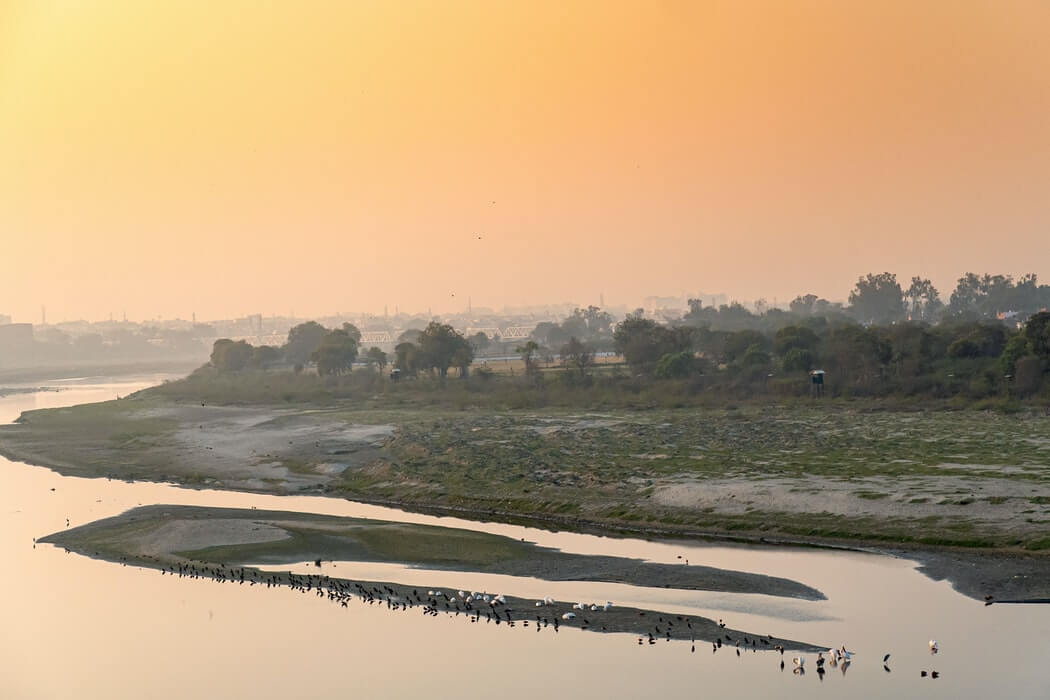 The Yamuna suffers from an unfortunate throes
1
“The river presently, not only receives large volumes of domestic sewage and industrial waste but also lacks the basic minimum of freshwater as almost all the water present in the river is diverted for various consumptive uses like drinking, agriculture, and industries at the Hathnikund barrage.”

Examining the human-caused impairment to the river has been the most vitally required analysis while covering its pollution story. It is wrenching to see how an oppressive race vandalizes natural resources to an extent that their remediation seems impractical.

Such is the harm caused that even after an investment of several thousand crores by the government, the river brimming with contaminants struggles to achieve even bathing standards.

“The river presently, not only receives large volumes of domestic sewage and industrial waste but also lacks the basic minimum of freshwater as almost all the water present in the river is diverted for various consumptive uses like drinking, agriculture, and industries at the Hathnikund barrage.” mentions the Central Pollution Control Board(CPCB) in its report to Yamuna Monitoring Committee (YMC).

The inconsistent e-flow of Yamuna

Due to the deposition of immobile debris, toxic effluents including chemicals, choking plastic, clothes, etc., the river depth has reduced. The scanty width and depth have made the banks of river Yamuna in Delhi the most flood-prone regions in its entire course. Multiple monsoon season statistics suggest the prevalence of flood-like conditions despite minimal rainfall experienced in the entire course of the river.

Not just floods but Yamuna river also experiences a dry and fragmented course almost every year. As per the recent YMC report, almost all the freshwater released either evaporates or percolates into the river bed during the drier season before reaching the Wazirabad Barrage.

No fresh water is released into the river downstream of Wazirabad during this water deficit season and therefore, whatever flow present in the river is formed by the effluents joining into it through 22 stormwater drains polluting the river severely.

Turbidity i.e. cloudiness in the water is seen to be increasing in the river as it transitions into the city. With an increase in the discharge of rotting pollutants from Wazirabad(7.9 mg/l ) to Okhla(27 mg/l) barrages, the city observes an increase in the trajectory of biological demand for oxygen(BOD).

As per the YMC report on the Yamuna river, pre lockdown statistics for chemical oxygen demand (COD) varied from 28  ppm in the Palla region to 90 ppm and 95 ppm at Nizamuddin Bridge and Okhla Barrage, suggesting a heavy increase in organic pollutants. Consequently, reducing from 17.1 ppm near Palla to undetectable at Okhla barrage, a massive decline was recorded in the Dissolved Oxygen(DO) levels of the river.

Massive ammoniacal froth deposits with 20 times higher nitrogenous and phosphoric concentration near Okhla and a severely foul smell confirms the presence of amino acids in the river water. The presence of such nutrient-rich water thus makes the Yamuna highly eutrophic as it moves ahead of the National Capital Territory (NCT).

Why is the Yamuna an electrically active River?

Due to excessive contamination of heavy metals like Iron, Chromium, Nickel, Zinc, and Lead, and ionic pollutants like ammonium, sulfates, phosphates, and chlorides, abnormally high electrical conductivity is observed in River Yamuna.

Bioaccumulation in the biodiversity

Accumulation of nutrient concentration in river water results in the passing of these toxic chemicals to organisms in different trophic levels of the food chain through biomagnification.

It should be noted that these chemicals may be slow sedatives, carcinogenic, or simply poisonous for these organisms to consume. Biomagnification is observed as one of the serious threats to the food web held by the river Yamuna.

For instance, Nickel is a carcinogenic metal, it accumulates in toxic concentration near Okhla waters. The heavy metal has a high cancer-causing tendency of 17.02X104, one of the highest in all metals. Studies by NCBI suggest that some fish species like O. niloticus (common carp), an invasive fish in the Yamuna, have shown accumulation of Nickel metal. This fish, when consumed by some predatory birds like vultures, eagles, and flamingos, increases their chance of vulnerability.

Due to less compliance in the effluent released by the Pharmaceutical industries in NCR,  the slurry outflow has increased the level of drugs and hormones in the river.

An NMCG NEERI report on the Ganga basin suggested the increase of hormones like Diclofenac sodium salt, progesterone, and testosterone in River Yamuna in its basin course. It further highlighted the increase in the level of drugs like paracetamol, antibiotics such as chloramphenicol, tranquilizers, and sedatives.

There is also a rapid increase in the population of microbial life forms in the river. The Central Pollution Control Boards(CPCB) report 2016 mentions that the highest levels of total coliform population range from 54 thousand MPN/L in Wazirabad to 160 million MPN/L in Okhla. The levels of faecal bacterias also experience an avalanche in the city water.

Another alarming concern due to the increase in drug concentration in the river water is that some microbiologists even fear that the pathogen culturing in the stream can develop strains for drug resistance in them.

Pollution and the affected aquatic biodiversity

“There is hardly any aquatic life left in the Delhi stretch or downstream. There was a time when fishes, turtles & crocodiles were common in Delhi's Yamuna”, says Mr Manoj Misra, founder of Yamuna Jiye Abhiyaan. He highlights that the worst hit by water quality degradation of river Yamuna are the organisms inhabited to it.

Many species of phytoplanktons, plants, zooplanktons, 140 species of fish and turtles, and other organisms that are native to the river have seen a critical decline in population. The water quality up to the Palla region is acceptable for fish proliferation, however, the reduction in DO values due to an increase in contamination downstream of Mawai hence providing ground for breeding of non-native invasive fish species like Cyprinus carpio and Tilapia niloticais.

As per the comprehensive survey conducted by the Central Inland Fisheries Research Institute (CIFRI) from headwaters of river Yamuna at Delhi, the catch composition of 93 native fish species including Golden Mahseer, Snow trout, Kalaban, Calbasu carp, etc. belonging to 23 families that occur in the river has significantly declined due to the increase in pollution levels.

The Gharial Reptiles, one of the largest freshwater crocodiles are essential for the rich heritage in the Yamuna. Due to the consumption of these contaminants, Gharials have endured a reduction in population. They are critically endangered species and if not taken care of, can face extinction as per the report of India Environment Portal.

River Yamuna was once a habitat for the national aquatic animal Platanista gangetica (Gangetic dolphin). As a result of massive pollution, these dolphins have not been sighted in the river since 2003 and the last dolphin seen in Delhi was in 1967. Amongst other endangered animals native to the river are Chitra indica, soft head turtles, spoonbills, etc.

The river has a great role in replenishing the groundwater, aquifers, and nutrients in the soil via floodplains but large volumes of domestic sewage and industrial effluents with lack of freshwater, in turn, contaminate these. Mr Manoj Misra, “Delhi pollution has spoiled soil as well as groundwater within Delhi as well as downstream.”

We humans need to realize that we are not the controller but just a small part of the ecosystem. If we try to dismantle the system, we will surely get affected by the wreckage. The same is the case with River Yamuna. We have exploited this natural resource, so our suffering is also inevitable.

(In the next article, we shall describe how humans have been affected by the towering pollution levels in the Trickling Stream of River Yamuna.)