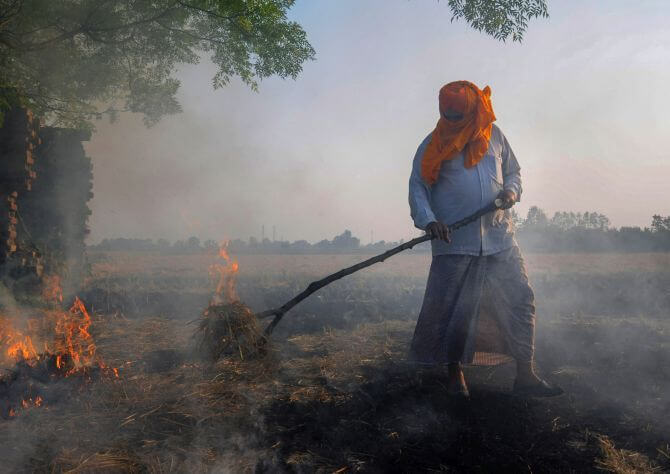 Burst Your Bubble With Stubble Trouble – Panel Discussion
A panel discussion on the deteriorating issue of stubble burning was organized by Stubble Trouble, a youth-led organization with the aim to amplify the voices of farmers and experts to combat the practice.

A panel discussion on the deteriorating issue of stubble burning was organized by Stubble Trouble, a youth-led organization with the aim to amplify the voices of farmers and experts to combat the practice. The panel discussion, which was attended by over 100 people, included three dynamic panelists: Mrs. Bharati Chaturvedi (Founder of Chintan NGO), Mr. Tamseel Hussain (Founder of Pluc.Tv), and Mr. Liakatbir Singh (Executive Director, Pahal NGO).

The discussion kicked off with the critical question: what do you think is the one major reason as to why farmers burn stubble, especially rice stubble, in the states of Punjab and Haryana?

Mr. Liakatbir Singh gave an answer by saying that there are a variety of reasons that can be attributed to the growth of stubble burning. He argued that this has been the traditional way for farmers to manage stubble for the simple reasons that it is cheap and easy.

Mrs. Bharati Chaturvedi then deepened the scope of the discussion by shedding light on the foundational problem of growing the wrong crop in the wrong ecosystem. A water-guzzler like rice crop is not suitable for Punjab. Adding to this, the timing of sowing the crop continuously changes so that farmers don’t exploit groundwater and rely on monsoon rains.

She underscored the importance of ecology in her argument: the idea of using Punjab as a food bowl is detrimental to the environment. However, there is a huge market for export for rice. Since there is a demand for rice by people like us, the ecology continues to be exploited, she argued.

Mr. Tamseel Hussain then added to the discussion by sharing his personal experience with farmers. He said that there was a unanimous voice about how the Green Revolution led to the current scenario of intensive rice-growth in Punjab.

He agreed with Mr. Liakatbir Singh on how cheap this process is. Moreover, he argued that stubble burning did not require intensive labor. Even after a 2,000 rupee fine, farmers prefer to burn stubble, because other measures such as subsidies on machinery remain ineffective and expensive. The orders of the Supreme Court, which demanded States pay the dues to farmers, have not been met.

The discussion then shifted towards the effectiveness of the diversification strategy: In late 2019, farmers have been growing other crops such as cotton and maize. Will this help in the reduction of cases of stubble burning?

This question was answered by Mrs. Bharati Chaturvedi who has been following the development in Punjab quite closely. She voiced her concern about the growth of cotton in Punjab for two reasons: It, like rice, uses a lot of water. Then, it also uses a lot of pesticides. BT Cotton is not a sustainable crop, and this again emphasized the problem of the wrong crop-wrong region. She argued that we are simply replacing one cash crop by another cash crop, which is equally problematic. The shift to cotton is particularly evident in the Gurdaspur district. To offer a solution, she said that millets are a good option for farmers to grow. Mr. Tamseel Hussain agreed with her by informing the audience about how grave the problem of groundwater depletion is.

To conclude the discussion on this question, Mr. Liakatbir Singh said that we need an aggressive approach, similar to the one adopted during the Green Revolution, to diversify towards better crops.

The next question was about some challenges associated with the use of happy seeders and some alternatives to it. Mr. Tamseel Hussain started by eliciting that subsidies on happy seeders remain inadequate, as farmers still have to pay huge sums of money. To reduce costs, farmers often share happy seeders, but they miss out on the opportunity to use it due to time constraints. Farmers, he argued, call for better subsidies and direct money transfers as a solution to this problem.

Mr. Liakatbir Singh said that a happy seeder is just one solution that is used to sow the seeds of the crop. There are other alternatives such as mulcher, super seeder, etc. Happy Seeder is one of the good options on which the government has invested a lot. Hence, there’s a lot of push from the government to use it. He agreed with Tamseel Hussain by saying that the subsidy is sometimes inadequate.

Mrs. Bharati Chaturvedi then brought forth the problem of sharing the happy seeder by talking about the stringent cycle of fortnight followed by farmers. In the Amritsar district, where she worked 3 years ago, she noticed Dalit women collected stubble and used it as fodder to generate income. She called for support for such entrepreneurs to encourage the indigenous existing solutions which have a wider outcome. This also ensures that women earn better even if it is for a limited amount of time.

Mr. Tamseel Hussain then talked about the importance of buying back stubble. This stubble can be used to produce a variety of products. The training system adopted by the government and universities needs to be improved. People are already acquainted with the solutions highlighted in the training sessions.

The last question posed by the moderator was regarding the breakthrough that we needed to combat this, and what our role is as responsible citizens?

Mr. Tamseel Hussan said that awareness coupled with collective action. Collective action can drive change. Then, Mr. Liakatbir Singh talked about the importance of changing mindsets: he pointed out that we need to not hold farmers accountable for this practice and instead start discussions.

Finally, all the questions from the attendees were entertained and the panel discussion came to an end.