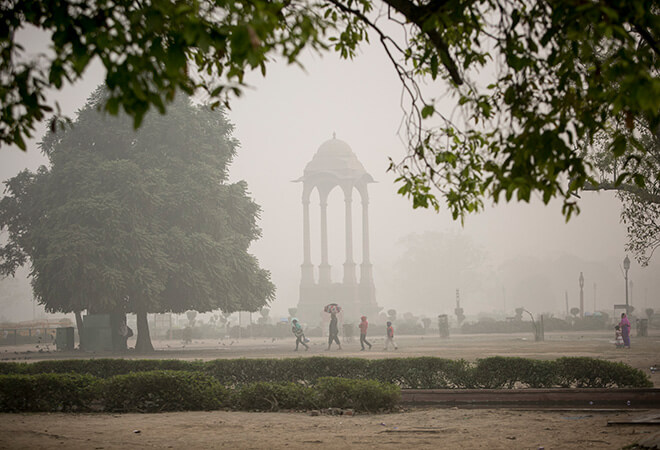 India is subjected to poor air quality and atmospheric pollution, mainly due to emissions from vehicles, industry, brick kilns, coal-based power plants, and crop residue burning. As we emerge from the coronavirus crisis, there is an opportunity to set ourselves on the path towards addressing the issue of air pollution. In fact, COVID-19 has made air pollution a top concern worldwide.

Air pollution has been one of the most severe global crises of all times. Many countries, including India, see air pollution as a major health issue. In fact, in 2019, schools in Delhi and adjoining districts remained shut for a few days due to the spike in pollution levels after Diwali. The Delhi government had shut all schools for four days after a Supreme Court-mandated panel declared a public health emergency.

India has always faced the worst air pollution until the coronavirus lockdown took over in March. Soot, dust, ozone, and sulfur oxides were a threat to millions of people living in India. According to research by IQ AirVisual, a Swiss-based group that gathers air-quality data globally, and Greenpeace in 2019, of the world’s most polluted 30 cities, 22 are in India.  Another study claims poor air quality caused 1.2 mn deaths each in India and China in 2017.

India is subjected to poor air quality and atmospheric pollution, mainly due to emissions from vehicles, industry, brick kilns, coal-based power plants, and crop residue burning. The coronavirus lockdown that was imposed in March this year to contain the spread of the virus severely restricted economic activities that led to some amazing impacts on the environment.

Reports and images emerged from across India of visibly clearer and blue skies, in some cases for the first time in people’s lifetime. During the lockdown, even various kinds of birds were visible every day that were never seen before. Due to the reduced pollution in Ganga’s water, the South-Asian river was seen as a hub where dolphins were spotted at various Ghats.

According to data from an analysis of the CPCB Air Quality Index data, the lockdown prompted by the Covid-19 outbreak from March 25 to June 8 helped to significantly reduce air pollution levels in Delhi, Mumbai, Kolkata and Bangalore. The four cities achieved 95% of the National Clean Air Programme (NCAP) target set by the Centre, as per the analysis carried out jointly by CarbonCopy and Respirer Living Sciences.

Can the air quality remain low after the lockdown?

Dr. Arvind Kumar, Founder and Managing Trustee Lung Care Foundation says, “if the lockdown had not happened and the pollution levels had not dipped, going by the north Italy experience, the coronavirus would have spread faster. Every effort should be made to keep the pollution level low, which also includes dust pollution. High pollution levels will contribute towards faster spread of the virus.”

As we emerge from the coronavirus crisis, there is an opportunity to set ourselves on the path towards addressing the issue of air pollution. In fact, COVID-19 has made air pollution a top concern worldwide.

If we really seek solutions then, we must take some steps for a better environment:

1. Reduce the use of your personal vehicles. Use public transport as much as possible. Vehicular pollution is one of the leading causes of air pollution. Don’t cut trees from places where the carbon emission by industries is more because trees maintain the oxygen cycle and balance the environment.

2. The most basic solution for air pollution is to move away from fossil fuels, replacing them with alternative energies like solar, wind and geothermal. Producing clean energy is crucial.

3. Stop burning garbage. Use local garbage and recycling services. Pollutants produced by the burning of garbage such as carbon monoxide (CO), carbon dioxide (CO2), and nitrogen oxides (NOx) are released primarily into the air, and close to ground level where they are easily inhaled.

4. Governments should keep air pollution control programs on track and not relax environmental regulations in the name of economic growth.

5. Governments also need to measure the full range of pollutants and make this information available in real-time.

6. Plant trees. Trees are able to absorb carbon dioxide from our atmosphere and reduce the ‘greenhouse effect’, creating a less polluted, more sustainable world for our future generations.

7. ‘Cycle’ more instead of using your cars and two-wheelers

Written by
Narendar
Narendar is a teacher and Environmentalist from Mathura. He runs his own instagram page 'Eco Friendly' where he talks about everyday environment issues.
Recommended Articles