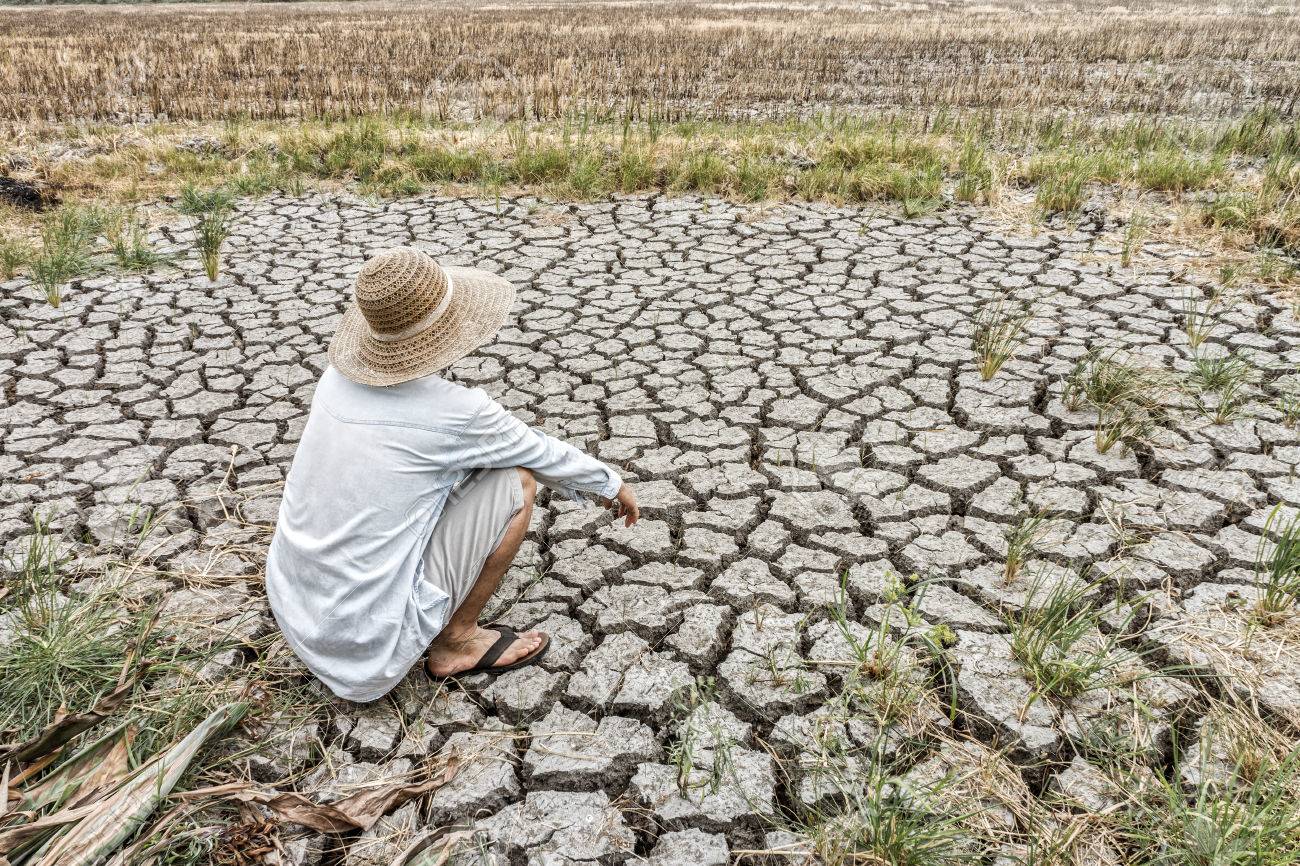 Climate change – which has now come to being known as a ‘climate crisis’ – is plaguing the environment increasingly by the second. This is inclusive of the disastrous impact it has on people residing in countries or cities which are at a higher risk of being adversely affected by climate change.

Most importantly, something that is usually cast aside is how people living in rural areas are far more affected by climate change than urban dwellers. This may be due to the higher frequency at which rural dwellers are in contact with the environment and nature. Rural dwellers tend to take up jobs that require them to engage with nature; the most common job being that of a farmer, or something similar in the agricultural industry.

According to Joshua C. Morganstein from the American Psychiatric Association, there are links between the deterioration of mental health and climate change. Although there are mental health implications for all of us, it is far more prevalent in people residing and working in rural areas – especially farmers.

Farmers slog day in and day out to be able to grow and provide a sufficient and necessary amount of food for people all around the world. They receive little recognition or support from most of the countries and their governments around the globe, in spite of being under constant pressure to maintain their crops and send out quality grains, or other foods, on time. Agriculture is highly dependent upon climatic conditions.

Climate change is threatening the productivity of agriculture – making it vulnerable both economically and physically. Food production is threatened by the increase in climate change variables such as rainfall patterns, droughts, temperature hikes, changes in sowing and harvesting dates, etc.

Climate change is also much worse in countries that have sub-tropical weather. Such changes due to climate change variables have a huge impact on the way farmers approach their farming: they can no longer rely upon their years of experience and knowledge and are often left feeling confused and frazzled.

Usually, such a heavy blow to farming brings about concerns in the minds of farmers in relation to other similar problems such as government compliance, adapting to newer technology, cost/price squeeze, monetary losses, etc.

Such problems exacerbate the amount of pressure that exists upon farmers and decrease their mental mobility. According to a study published in the Garnaut Climate Change Review, “The link between acute weather disasters, such as floods or cyclones, and mental health problems is well established”. Although most farmers did not admit to feeling any signs of experiencing mental illnesses, they admitted to sleeping problems, irritability, and an increase in alcohol consumption – all of which are typical symptoms of anxiety and depression.

But older farmers are said to suffer more due to these problems, they find it harder to cope with the extreme changes taking place. They tend to feel a pervasive sense of loss, a lower social status, and self-esteem, and they also tend to feel more marginalized from society.

Symptoms of mental illnesses are worse for low-income farmers

The symptoms of mental illnesses are worse for low-income farmers who are on the shorter end of the stick in terms of receiving funds or support. It is common for farmers who are asset rich and cash-flow poor to face severe climate change-related economic hardship, especially during times of drought. Climate change merely aids in worsening their problems, which puts farmers at a greater risk of developing mental health problems.

Farmers’ mental health often at times gets worsened to a point that they succumb to extreme measures, such as taking their own lives. There is a link between climate change and an increase in the rate of farmer suicides. There is some primary evidence linking the increase in droughts to an increase in suicides.

Droughts being a frequent problem in Australia, and various other countries in the world are likely to increase the hardships faced by people leading rural lifestyles; particularly farmers.

“The stresses of lost income, debt and damage to property inevitably spill over into mental health problems for some, and to the tragedy of despair and suicides for a few.” Given the alarming rate at which climate change continues to wreak havoc upon the world, it is unlikely that the mental health condition of farmers will see much improvement anytime soon.

Similarly, this issue does not occur in isolation, for example at least 60% of India’s population will be affected due to climate change; impacting not only their livelihoods but also their mental health.

Agriculture plays a huge role in this developing country – with roughly two-thirds of the population engaged in jobs related to agriculture. As technological developments keep taking place, so do the methods of food production. Within a period of 15 years itself, from 1980-1995, the production of food grains in India rose from 130 million to 191 million; it increased at an annual rate of 1.6 percent from 1995 onwards.

We can see that even before the effects of climate change had begun to affect Indian farmers on a widespread level, they were under an immense pressure to provide food on such an excessively high level; the implication of it is that Indian farmers, who usually live in a state of poverty, already had a huge amount of stress and burden to deal with.

Farmer suicides in India are extremely common. This may be due to a few reasons such as debt burden, price crashes, family problems, etc. But one of the most common problems can be blamed upon the failure of crops – which, as of 2002, comprised of roughly 16.84 percent of all farmer suicides in India.

With climate change worsening in the latter part of the 2000s, this percentage is slated to increase due to climate change, and how it has over and again proven to be a heavy blow to agriculture. India being a subtropical nation, will have to face a much higher and more direct burden of climate change.

As seen in Australia, there is a clear link between climate change and the worsening condition of farmers’ mental health. The same can be said to occur in India. Due to the poor amount of research on the mental health of farmers in India, it is hard to ascertain what kind of mental issues they face on a daily basis, but with such a high farmer suicide rate already, there must be pre-existence of mental illnesses in a lot of farmers – such as a high amount of stress, anxiety, depression, etc.

With the input or involvement of climate change and its innumerable negative impacts of crops, it would be safe to assume that the trajectory of the mental state of Indian farmers is rampantly declining. With the sheer lack of support Indian farmers receive from the Indian Government, there is no saying as to whether they will receive any form of solidarity or respite from anyone anytime soon.

This is why it is extremely important that research on Indian farmers is undertaken and studied to be able to understand to what extent they are affected. Considering the already high percentage of farmer suicides in India, if this issue is not tackled at the earliest, the rate of suicides will not see a shortfall soon.

There exists very little research on the impact climate change has on the mental health of farmers. This is due to the lack of awareness that exists in society surrounding mental illnesses – and especially because the most common assumption of people with regard to climate change is that it is solely a physical problem, it is seldom that people go beyond the common worldview to study this issue from a different lens, or a different angle.

Most of the research undertaken in relation to this topic is usually limited to first world countries. Whereas, the effects of climate change are more prevalent in developing countries, such as India, with a huge percentage of the population working in the agricultural field; they are more likely to face a major portion of the brunt of climate change and are much more prone to mental illnesses. But these often go unnoticed due to the lack of research that is undertaken in developing countries, or otherwise too.

Despite the circumstances of Australia’s agriculture, little to no consideration has been given to farmers’ mental health. It is of the utmost importance that Governments and similar authorities address the issue of climate change and the adverse effects it has on people. For example, the Government of Bangladesh has made climate change an integral part of their national development strategy and have started to tackle the impacts of climate change while more active measures need to be taken, this is a good starter action that must be adopted by all countries.

Farmers will continue to suffer for the needs of the entire world. We have often failed to give them the due support they have required before, it is a must that we do not overlook their plight and work hand in hand to help them in adapting to such bleak conditions.

After all, farmers make up one of the most important jobs in the world, we must support them in any way that we can; this requires us to take on the issue of climate change and speak up for the vulnerable communities who are overlooked most of the time.