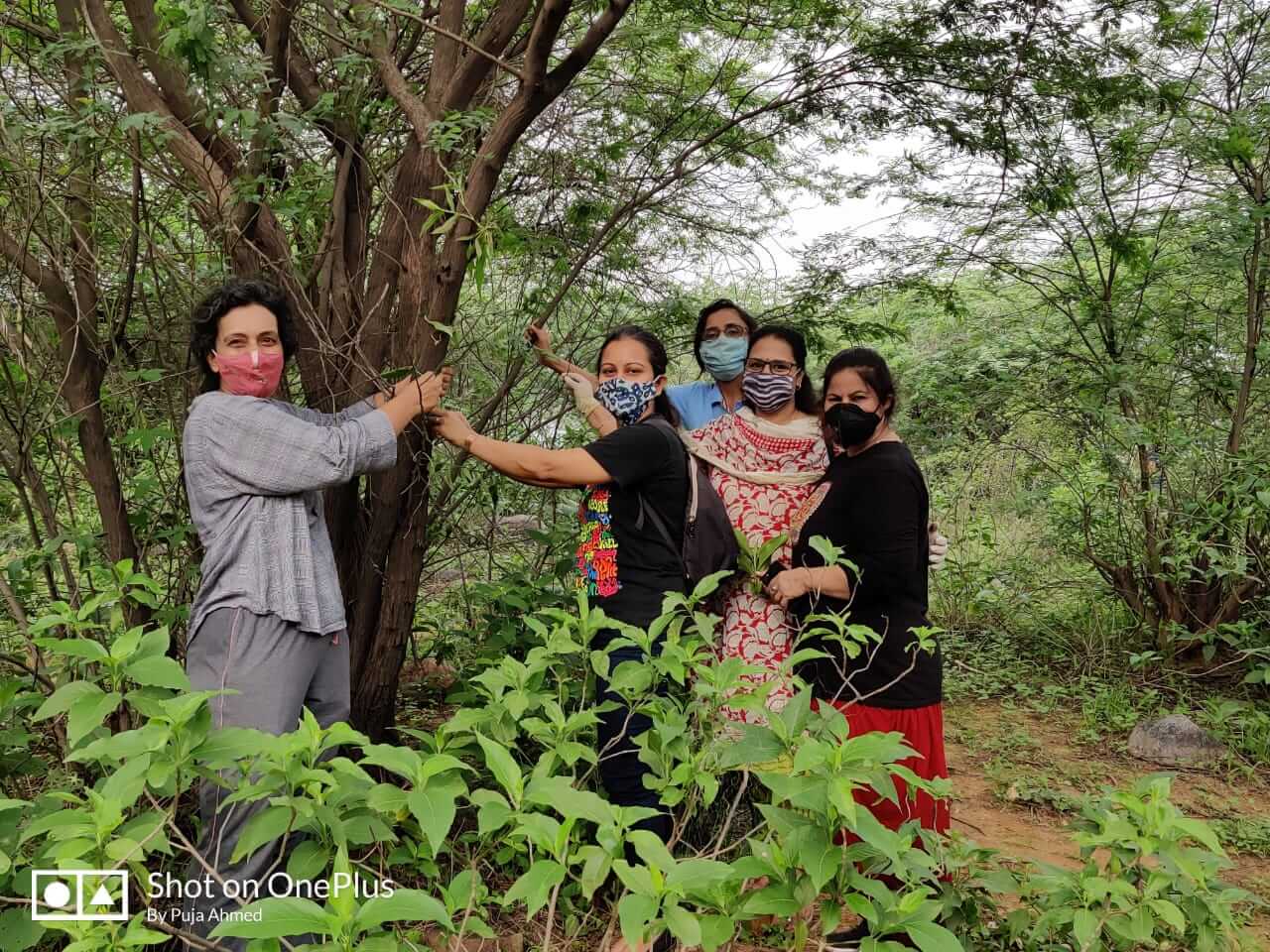 For a few Gurugram residents, Raksha Bandhan morning started with expressing their love and care for the Aravallis. Using leaf vines, women and children tied symbolic Rakhees to the trees taking a sacred oath to protect the forests that are the millennium city’s lifeline for clean air and water security.

“I had only read about the monitor lizard in my science book but saw it for the first time in the Aravalli forest when we came here for the Vriksharopan. Along with my brother, I have taken a sacred oath this Rakshabandhan to protect the home of all the reptiles, birds, butterflies and mammals such as leopards, jackals, neelgais, civet cats, porcupines that live here,” said 13 year old Ayana Chaudhary.

This group of 20 citizens also participated in a plantation drive organised by the Gurugram forest department to reclaim encroached Aravalli forest land near Kholi Baba Mandir behind Suncity in Sector 54. “We planted around 40 saplings of native Aravalli trees. It has been a great initiative by the Gurugram forest department to involve the citizens in this native planting exercise,” stated Puja Ahmed, an active member of the Aravalli Bachao Citizens Movement.

As the oldest mountain range in the world is disappearing, the intensity of dust storms coming in from the Thar desert is increasing and the National Capital Region is moving closer to desertification. The degradation of the Aravallis also threatens Gurgaon and NCR’s water security. High levels of natural cracks and fissures in the Aravalli hills make this mountain range a superior zone for recharging ground water, which is extremely in the red zone at this point of time as extraction is 300% more than what is put back into the ground.

“We live in one of the most polluted cities in the world. It feels good to have contributed to increasing the native green cover of our city as part of this drive today. Planting native species of the right ecology is critical in these water-stressed times as it helps in saving water and creating biodiversity-rich habitats,” said Aditya Mukarji, a young 16-year-old who is networking with young people across different cities to plant native flora.

The area where the native plantation was carried out is protected under the special sections 4 and 5 of the Punjab Land Preservation Act (PLPA) which restricts breaking of land, construction etc. Sadly, large portions of legally protected Aravalli forests have been illegally cut and encroached upon in defiance of forest laws and orders of the Supreme Court, Ministry of Environment and Forest and the National Green Tribunal. Illegal farmhouses, cricket academies, gaushalas are thriving in the Aravallis around Gurugram and Faridabad at huge cost to the wildlife and the ecosystem of the world’s oldest mountain range.

“We would like to see all the illegal encroachments in Raisina hills, Behalpa, Ghata, Haiderpur Viran and others removed and native flora planted to restore the Aravalli forest in Gurugram district,” stated Vaishali Rana Chandra, an environment activist.

The number of forest check posts and guards patrolling the Aravallis has been reduced by 50% over the last 2 years. “We urge the Haryana government to increase check posts and direct the forest department to use drones bought for INR 20 lakhs. This aerial surveillance will be effective in checking the rapidly rising cases of illegal encroachments that are eating up our Aravalli forests in Gurugram and Faridabad,” said Neelam Ahluwalia from the Aravalli Bachao Citizens Movement.

Haryana has the lowest forest cover in India, just 3.62%. The national average is 21%. Scientists have established a clear link between deforestation and an increase in virus outbreaks. “The biggest learning from COVID for the Haryana government and forest department must be to increase our forest cover. As citizens, we look forward to more such drives of native Aravalli plantation,” said Megha Consul, a doctor, and Aravalli forest friend.

Aravallis occupy only 2% of the land area in Haryana functioning as the green lungs, shield against desertification and water recharge zone for Gurugram and the entire National Capital Region.

“Life of millions of people living in the NCR cities is at stake. The Aravallis need to be preserved as a wildlife habitat and ecological marvel for our future generations. As part of our citizen’s campaign, we plan to connect more and more young people with the beauty of these forests. Do follow @AravalliBachao on Instagram, Facebook and Twitter to know about our events and be part of this citizens' campaign,” said Zenith Chaudhary, an educator and Aravalli Bachao campaigner.