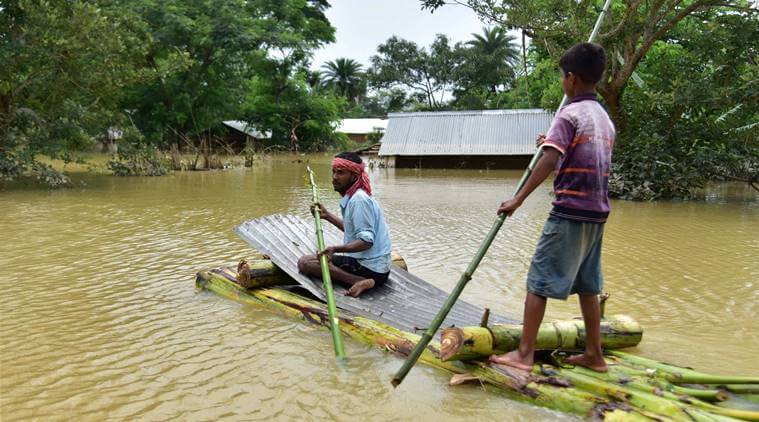 Assam floods and the untameable Brahmaputra
There has been incessant rainfall across Assam and North East and the river Brahmaputra and its tributaries are flowing above danger at several places submerging fresh areas every day. The Brahmaputra features among the world’s top five rivers in terms of discharge as well as the sediment it brings, originates from the Himalayas and flows […]

There has been incessant rainfall across Assam and North East and the river Brahmaputra and its tributaries are flowing above danger at several places submerging fresh areas every day.

The Brahmaputra features among the world’s top five rivers in terms of discharge as well as the sediment it brings, originates from the Himalayas and flows through Tibet as the Yarlung Tsangpo. It enters India through Arunachal Pradesh as Siang or Dihang River, it then flows south-west through Assam as the Brahmaputra, which again glides South through Bangladesh as Jamuna and descends into the Bay of Bengal.

Over 17 districts of Assam affected by floods this year

As many as 17 districts of Assam continued to reel under floods despite the overall situation improving considerably.

A statement by the Assam State Disaster Management Authority said 17 districts are still affected, impacting 6.8 lakh people, out of whom 4,852 are taking shelter in 53 relief camps.

Barpeta district is still the worst-hit with over 3.98 lakh people impacted, followed by South Salmara with 87,044 lakh people, Goalpara with more than 78,00 persons and Dhemaji with more than 28,000 people, the ASDMA said.

Animals in Assam affected due to floods

Pobitora Wildlife Sanctuary, Kaziranga National Park and Manas National Park have also been affected due to the floods. As of 2nd July, 26 animals including two rhinos died during the flood, according to reports.

Many animals including one-horned rhino, deer, elephant even fled from the park to seek refuge in safer places in the nearby areas.

This has made it easier for the poachers to locate and kill the wild animals for meat and body parts.

Why do these floods happen?

Every year lakhs of people are affected due to Assam floods. The mighty Brahmaputra sweeps away hectares of land leaving behind damage, destruction, and death.

“That region is cold, arid and lacks plantation. Glaciers melt, soil erodes and all of it results in a highly sedimented river,” Dhrubajyoti Borgohain, a retired chief engineer of the Brahmaputra Board, a central government body functioning under the Jal Shakti Ministry’s Department of Water Resources, River Development and Ganga Rejuvenation told media.

By the time the river enters Assam, a state comprising primarily floodplains surrounded by hills on all sides, it deposits vast amounts of this silt, leading to erosion and floods. “As the river comes from a high slope to a flat plain, its velocity decreases suddenly and this results in the river unloading the sediment,” said Borgohain. The river’s channels prove inadequate amid this siltation, leading to floods.

2012: In 2012, at least 77 people were killed and nearly two million affected by heavy monsoon rains that caused floods in Assam. Over 500 animals including 16 rhinos in Kaziranga National Park.

2015: More than 1.5 million people were affected and more than 200,000 people seek refuge in relief camps after Assam floods.

2016: At least 25 people were killed by flooding in Assam with millions of people also displaced. At least 10 Rhinos died and more than 130 deer lost their lives in trying to move to safer pastures. The Kaziranga was almost 80% submerged in water.

This year Assam had to fight two battles at the same time, the Covid-19 pandemic and the Annual Floods.

Due to the impact of Climate Change and Glacier melt and rising water level, Assam will face more impacts of floods in the coming years. With the increasing deforestation, encroachment of land and failure of embankments the floods will lead to more loss of life, land and economic loss and infrastructure damages.

Assam being extremely vulnerable due to its geographical location is worrisome and authority needs to take immediate steps in building strong policies and strategies for Climate Justice.