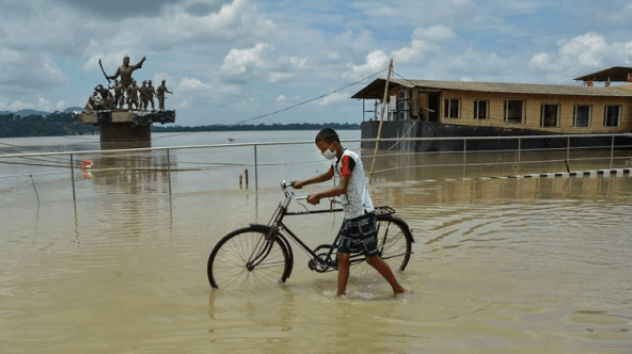 Assam Floods: The annual destruction of environment
1
With more than 50,000 people affected and 14 fatalities reported in 5 districts of the state, Assam has received the second wave of floods in this monsoon season. Post cyclone Amphan continuous downpours have raised the level of water in the river Brahmaputra and its tributaries which has caused severe inundation in the districts of […]

With more than 50,000 people affected and 14 fatalities reported in 5 districts of the state, Assam has received the second wave of floods in this monsoon season.

Post cyclone Amphan continuous downpours have raised the level of water in the river Brahmaputra and its tributaries which has caused severe inundation in the districts of Dhemaji, Jorhat, Mahuli, Sivasagar, and Dibrugarh.

A major loss of property in 102 villages and 5031 hectares of cultivation exploitation has also been reported by ASDMA (Assam Disaster Management Authority) in the state. Furthermore, as forecasted by the meteorological department, the states of Assam, Meghalaya, Arunachal Pradesh and, the rest of the northeast may receive a deluge of rain hence severing the current situation.

Reportedly, 9 districts including Kokrajhar, Dhubri, Goalpara, Chirang, Baksa, Barpeta, and Nalbari have been issued a red alert from the disaster management department of Assam for the next four days. But is it the first time when Assam is getting tormented from the aggression of these rivers? Sorrowfully, the state has ‘managed to live’ with the wrath of such persistent floods.

Brahmaputra river: the sorrow of the state

Brahmaputra river is definitely the sorrow of the state, its vigorous hence unstable nature largely affects the population associated. While receiving one of the highest silt deposits in the world from the arid and rough terrain of Tibet, the river basin becomes quite shallow for holding a downstream brimming with one of the highest volumes of water on the globe.

Holding a discharge of about 19,830 cubic meters per second, the river ranks fourth on the planet in respect of discharge at the mouth. The water-body is further fed with gigantic tributaries and heavy rainfall experienced in the northeast increasing its volume many folds.

Additionally, in the state of Assam, the river flows in the plains surrounded by hills that feed higher volumes of rainwater into it. Alongside the overflowing natural basin of the river induced human activities like floodplain encroachment, climate change, and contamination worsen the impacts of the calamity.

Consequently, more than 30% of the total landmass of the state is prone to the destruction of floods almost every year during monsoon which is four times more than the national average.

Due to such persistent floods, heavy casualties have occurred in the years 1988, 1998, 2004, and 2012 taking the lives of thousands of humans and animals. The Assam Government estimated a loss of about 4659 Crore rupees due to flooding, resultant soil erosion, and death of domestic livestock till 2019.

Every year after the end of monsoons, hundreds of crores of rupees are sanctioned to the state for relief and reconstruction of damaged resources. In 2019 itself, the central government sanctioned more than 250 crore rupees as an aid to the state government and flood victims.

Adding to the problem, the floods don’t pity the helpless condition of the wildlife in Kaziranga National Park as well. The uphill areas of the wildlife park where animals instinctively moved for their safety during overflooding have been occupied by humans for activities like construction of hotels, unauthorized food outlets (Dhaba), and shelters barring their entry in the 60km stretch between Bokakhat and Jakhalabandha.

The forest department, therefore, has created 144 high land areas inside the forest covering just 50 acres. This artificial migration technique has limitedly benefitted the traumatized animals resulting in their increased vulnerability.

The government though working relentlessly for providing relief to the affected population and restoring the damage of infrastructure has failed to mitigate the root cause of the crisis.

Controversial solutions like building multipurpose river projects, altering the natural flow of the stream, and removing silt to increase the depth of the river presented by the government have been largely criticized by environmental activists.

The latter suggests the reclamation and embankment of the encroached floodplain to minimize the vandalization caused by the overflowing river. Despite the heated arguments and exchange of action plans, the river continues to cause destruction every year.

To conclude, the species are suffering due to the havoc caused by an unstable water-body and the administration needs to find sustainable solutions for their welfare as soon as possible to minimize the consistent loss of life and livelihood.