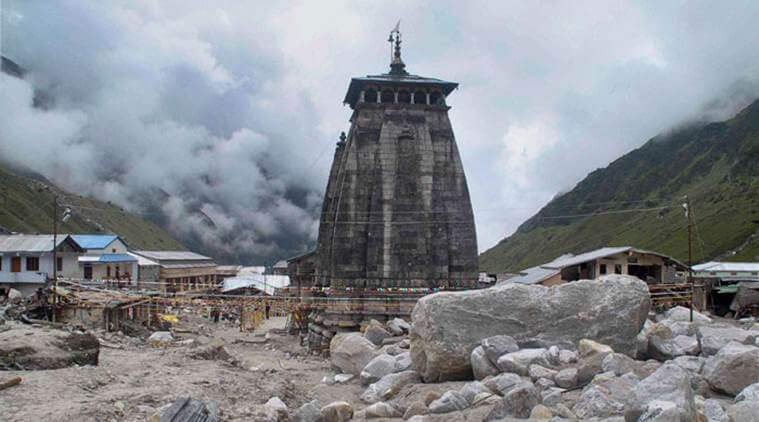 Is Kedarnath at risk again?
1
It was raining incessantly and the sky was thundering with the loud noise of encircling helicopters above. The scene seemed straight out of some film. Crowds of people had lined up with a hapless look on their faces at the helipad in Dehradun. Some of them would rush every time a helicopter landed to show […]

It was raining incessantly and the sky was thundering with the loud noise of encircling helicopters above. The scene seemed straight out of some film. Crowds of people had lined up with a hapless look on their faces at the helipad in Dehradun. Some of them would rush every time a helicopter landed to show pictures of their missing relatives.

Others searched frantically asking the authorities for any news of their loved ones. No one had foreseen this day would arrive. However, a foreshadow did linger before it all began. This is a story of an ancient temple, a landmark that has withstood vagaries of nature including one ice age. However, what happened when men came to develop the "backward" region.

Once a glorious idea "Development" in today's world has turned into a bane. Creating a world that eased the trials and tribulations of human life in extreme conditions by constructing roads, bridges or even pakka homes in places of extreme weather and living conditions soon turned into the exploitation of local resources and topography. This unplanned, greed-driven so-called development has lead to the destruction of unimaginable proportions.

Kedarnath, one of the most ancient pilgrims nestled amongst the Chorabari glaciers is one of the most difficult treks to traverse in the lap of the grand and majestic Himalayas. Situated in the relatively young state of Uttarakhand, the temple is one of the four major sites in India's Chota Char Dham pilgrimage. At a high altitude of 11,755 ft, it is home to rich flora, fauna, and eco-sensitive topography.

However, after the erstwhile region which was under the state of Uttar Pradesh became a state, the region saw a boom in development. Unplanned slipshod roads were constructed, resorts, hotels were built right next to the river.

More than 70 hydroelectric projects in different tributaries and watersheds were built as well as there were tunnels built and blasts undertaken for these projects in the geo-dynamically fragile and unique region.

According to environmentalists, this lead to restriction of the flow of river water, and the development activity along the rivers and streamsides contributed to a higher number of landslides and floods.

June 2013, when devastating floods and landslides wreaked havoc in Uttarakhand. The water level rose to unprecedented levels across the region.

According to a report of the National Institute of Disaster Management, the Kedarnath area was the worst affected region, where the heavy rains led to the collapse of Chorabari lake resulting in the release of a large volume of water that caused another flash flood in the Kedarnath town leading to further devastation in downstream areas.

Nature's wrath that day went on to take the lives of so many people. The Alaknanda river engulfed villages, hotels, houses, vehicles of people in just one hour, forcing people to run for their lives towards the mountains. Hundreds of families reportedly got separated and few survivors were rescued.

What led to the floods?

Researchers and scientists pointed to the early and heavy monsoon rains. They railed against poorly built homes, unregulated development along the Mandakini River that runs through Kedarnath, and soil erosion caused by thousands of pilgrims trekking on foot and on donkeys to reach this remote town in the northern Indian state of Uttarakhand.

Meteorological Department had warned the State Government about the heavy rains ahead of 3 days at that time.

Warning was issued on 13th June then again on 15th June. According to Anand Sharma, head of the Met Department in Dehradun as told to NDTV, "we were predicting heavy rains from 14th onward and we had informed the State Government and on 15th again we had issued the warnings with the possibility of very heavy rains and landslides."

However, another key cause to be added is global warming

Atmospheric scientists say that in northern India the intense rains that preceded the disaster are extremely rare. But they have discovered that an unusual collision of weather systems steered storms over Uttarakhand and locked them in place, pouring rain down for days.

Long-term changes in weather patterns are making such collisions more likely, a development that some scientists believe is caused by global warming. Global warming has is also melting glaciers all over the Himalayas, including one perched above Kedarnath. Some researchers say that had the glacier remained healthy, heavy rain alone would not have destabilized a gravel bank that collapsed, releasing a destructive pulse of debris-filled water.

The Kedarnath floods may be only a small precursor to never-seen-before megafloods," Maharaj K. Pandit, director, Centre for Inter-disciplinary Studies of Mountain & Hill Environment, Delhi University had said back when the floods took place.

Experts believe that the high precipitation on that very morning of June 16 rapidly filled up Chorabari Tal, a glacial lake less than 4 km upstream from Kedarnath, and the continuing downpour the next morning caused the lake to overflow.

Even today the foundation of the all-weather road was laid in 2017 by Prime Minister Modi himself. Scientists worry about the repercussions.

Making meditative caves in Kedarnath for tourism, making motels hotels and cutting mountains for roads in this region will not only make our Himalayas weak but attract more of such calamities.

The development of the Himalayas for tourism is not a healthy option for human or any other creature's survival.

We depend on the natural resources of the Himalayas. Construction could speed up the already Melting glaciers. Even today scientists worry that not much snow is settling in the high mountain regions because of development and construction.

However, as of today, the temple is again surrounded by a newly reconstructed town with even more cramped and unplanned construction than the last time. According to The Wire (2017), the agency responsible for the reconstruction is not one with expertise in urban planning or construction – rather, the job has been handed to the Nehru Institute of Mountaineering (NIM).

This is not all, much of the region has witnessed similar development with no scientific analysis regarding the region's sensitivity as well as zero planned approach. From the all-weather road that sacrificed almost 30000 or more trees along the way and which is but a huge mound of landslides from Rishikesh to Badrinath and gets dangerous in monsoons.

Kedarnath at a risk again?

At a seminar held a few days ago at the Dehradun-based Wildlife Institute of India (WII) that was also attended by the principal scientific advisor (PSA) to the PM, K Vijay Raghavan, scientists explained how the fragile ecology of Kedarnath was being disturbed.

Delivering a presentation, MPS Bisht, director of Uttarakhand Space Application Centre (USAC), an autonomous organization under the state department of science and technology that works in association with Indian Space Research Organisation (ISRO), said, “Just 50 metres behind the Kedarnath temple, a pit has been dug that is 100 metres wide and 50 feet deep for building the 'samadhi sthal'. This pit may turn out to be extremely dangerous in the future." The pit, if left uncovered, will fill up with snow every winter. In 2019, there was 48 feet of snow

Bisht said, “We already have huge glaciers in that topography and on top of that we are digging such a huge pit. This is bound to disturb the fragile ecology of the region. We have been seeing increasing seismic activity and earthquakes. Why are we creating a situation for another disaster like the 2013 tragedy to take place again?”

Bisht cited another example of “unabated unscientific work in the valley.” He said, “There was earlier a road to the Kedarnath temple from the right bend of the Mandakini river. There was a reason why the original road was constructed on the right bend by our ancestors. This was because the left bend has ‘loose glacial sediments’ which means that any structure here is prone to avalanches and landslides

Other scientists at the conference agreed. “Kedar means 'swampland', and digging a 50 feet deep pit here will only invite trouble considering that there are glaciers nearby like Chorabari (whose bursting had triggered the 2013 disaster),” said a scientist from the Dehradun-based Wadia Institute of Himalayan Geology.

He added, “The road being built to Kedarnath is being made on the most vulnerable area of Kedarnath valley and may any day collapse under the pressure of so many glacier shoots which are directly opening on the road.”

As scientists give warning upon warnings, the threat looms large upon the fragile eco-sensitive zone as new projects continue to be green-lighted. We have to reset and rethink "development."