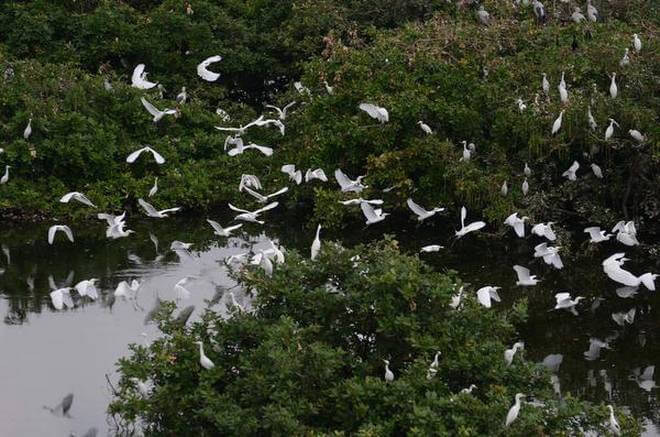 What is posing a threat to the Vedanthangal bird sanctuary?

Since the establishment of the Vedanthangal bird sanctuary in 1936, all over the primeval Vedanthangal waterbody, the villagers, and the migratory avian friends have learned to live in a good rapport. The villagers have knocked back to burst crackers or to make any loud noise for ages now not only procuring the birds’ trust but […]

Since the establishment of the Vedanthangal bird sanctuary in 1936, all over the primeval Vedanthangal waterbody, the villagers, and the migratory avian friends have learned to live in a good rapport.

The villagers have knocked back to burst crackers or to make any loud noise for ages now not only procuring the birds’ trust but also the farmlands that are irrigated from the lake with excretes of the birds prove to produce higher yields than the surrounding areas.

The sanctuary attracts nearly 30,000 birds from long distances to nest and breed in the 30-hectare lake here. These birds include cormorants, egrets, open-billed storks, and darters, white ibises, spoonbills, and different varieties of herons.

The state government of Tamilnadu recently granted a 40% reduction in the sanctuary’s area to enable Sun Pharmaceuticals, a diplomatic corporate, who are already positioned in the core zone (i.e., 5km radius from the lake is considered to be the core zone, they are in a radius of 4km) of the sanctuary and claims they are not.

The clearance is obtained with a bungled incompetent biodiversity report from the Sun Pharma which doesn’t even indicate the presence of migratory species needs a special mention.

Already the untreated effluents from the industry pollute the waterbodies Sitheri and Pudhupet Thangal which overflows into Vedanthangal lakes in the monsoons and under groundwater table which infest the people living in the area, their crops and the birds with various disorders.

“The harmful effluents kill the crops and the trees”

The villagers in an interview with a team headed by Yuvan, a notified naturalist/ecologist/environmentalist said, “the farmlands are irrigated by water from the wells which are now pervaded by the harmful effluents from the Sun Pharma industries, kill the crops and the trees and we suffer from various skin disorders and so are our cattle.

The water is not potable, appears unappealing in color and smell and produces foam”. The state forest department has also allowed two other red category industries to function in the core region namely Amco batteries and Ordain Pharma.

Clearing more land to industrial use in the core region of the sanctuary is a disregard for the avian landscape and the community which relies on it. This article is to make people heedful of what the ignorance of government can do to the ecologically rich areas such as Vedanthangal.

The villagers have protested since day 1 of inspection for the clearance and in between, they could not continue with the protest due to the status quo of the lockdown.

This Monday, June 8, evening, a twitter storm happened as a part of the campaign #SaveVedanthangal, asking the state government to withdraw the clearance.

Responding to the outrage of the public Sun Pharma tweeted the next day, “Sun Pharma has no plans now or in the future, to expand its manufacturing operations inside the Vedanthangal bird sanctuary as wrongly reported in a news article. The company is not buying any additional land either near the plant or inside the sanctuary. We are committed to the preservation of the biodiversity and the natural environment of the sanctuary.”

Despite the fact they are already inside the core zone.

The state forest department also responded to the ripples of the campaign, stating there are no plans to de-notify areas of the bird sanctuary and will declare the sanctuary as an eco-sensitive zone which already a core zone, which will have lesser protection, trying to bail out the unlawful industries inside the sanctuary.

So, I request you all to come forward and join the #savevedanthangal campaign and do your part as responsible human beings.

Written by
Muthu Rubhan
Muthu is currently doing his II Prof medicine in Stanley Medical College, Chennai and is a budding environmentalist preferring environment to anything!
Recommended Articles