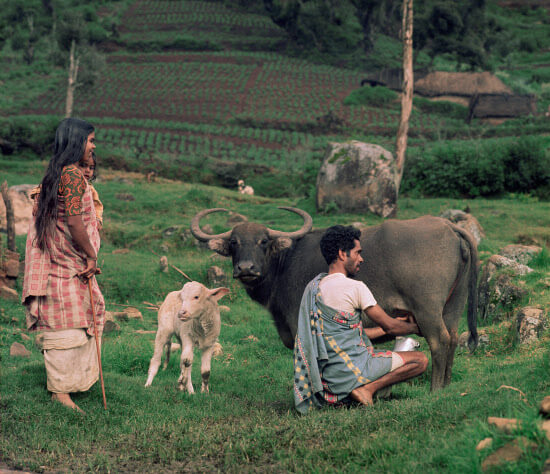 Save tribes to save your jungles
2
At a time when the world is struggling with declining numbers of its wild species, acknowledging tribal efforts could go a long way in wildlife conservation

For countless millennia, indigenous tribes in different corners of the world, have guarded our forests. They have treaded the same path as tigers, drank the same water as wild buffaloes, and sang the same songs as the native birds.

Their principles of ‘no waste’ and ‘giving back to nature’ have helped conserve our wild flora and fauna, in ways no number of textbooks could teach us about. However, the tribal people’s efforts to help conserve our forest reserves have often been disregarded.

'Need to acknowledge the efforts of the Tribes for nature'

Speaking of the historical injustice to Adivasis, the Indian tribespeople, Mr. Ravi Rebbapragada, Executive Director of Samata, a non-profit organization striving to protect constitutional rights of Indian tribes, says, “A dominant culture dominates and obliterates the practices of other submissive cultures. Tribal people, right from the beginning, are very shy and live secluded lives with nature. Therefore, they have been at the receiving end [of oppression] all through the centuries.”

A tribal rights activist for the last 30 years, Mr. Rebbapragada stresses the need for gifting the tribes the long-owed appreciation for their selfless contribution to the nature. “It’s strange how the society looks down upon the tribal people, instead of acknowledging their efforts.”

Living in harmony with animals

The Toda buffaloes of the Nilgiri mountains, located in southwest India, is a species staring at its elimination from the world. The reason lies in the Toda community’s growing interest in modern and ‘civilized’ occupations like agriculture.

Living in the Nilgiri Hills for centuries now, the Toda tribals are a pastoral community, who survive solely on cattle-herding, dairy farming, and embroidery.

At the higher Nilgiri ranges, above 1,800—2,000 meters, the Todas have formed their own world comprising small villages with only 2-3 houses each.

For the Todas, one of the most aboriginal tribes in India, their entire belief system revolves around Toda buffaloes, a breed of the Asiatic water buffalo (Bubalus bubalis). Ash grey body color and large crescent-shaped horns are the distinguishable features of these indigenous buffaloes.

Rituals are performed for almost every dairy activity, from milking and feeding the herds to churning butter and shifting pastures seasonally. Their religion, their folklore, their songs – every social element celebrates the staunch devotion of this buffalo cult towards their spirit animal.

Unfortunately, the ceremonies might soon come to an end. With the rapid decline in the number of Toda buffaloes in the recent years, the Toda culture stares at its obsolesce. A 2013 livestock breed survey by India’s Ministry of Agriculture & Farmers’ Welfare estimated the Toda buffalo population to be 3,003. The numbers have rapidly dwindled since then, reducing it to only 1500.

The Tamil Nadu government’s recent efforts of empowering the Todas with other livelihood options like agriculture have adversely affected the community. The younger generations are gradually giving up dairy farming and cattle herding. Moreover, the buffaloes have started losing their grazing lands to afforestation in Toda lands, which has been cited as one of the major causes of the vanishing buffalo herds. Another reason often quoted by the tribals and experts is the success in tiger conservation programs in the Nilgiri hills.

Deprived of grazing lands, the Toda buffaloes often venture into nearby forests where they are preyed upon by tigers. Alike the Todas, there are other Nilgiri tribes who base their religion and livelihood on an animal species. While it is buffaloes for the Todas, it is honeybees who are reverred as ‘sacred beings’ by the Kattunayakans, Kurumbas, Sholigas and Irulas.

As the world struggles to save its honeybees, tribals in India have important lessons to share. These tribes have been traditionally involved in the act of collecting wild honey from tree cavities in hilly forests and underground hives. They collect honey as per their minimum requirement and leave the rest for bees to sustain on, thereby ensuring sustainable practices of honey harvesting.

As the regional characteristics differ from place to place, so do the tribal practices observed. Despite their long list of dissimilarities, one thing remains peculiarly constant throughout every tribal community- the noble motive to protect their forests.

While the Kattunayakans wait for the monsoon to produce favourable amounts of honey yield, the Sherdukpens harvest honey twice a year- from wildflowers in June-July and primarily from rhododendron in October-November.

However, modern distractions of easier livelihood options have resulted in abandoning of these traditional skills. With only around half-a-dozen Sherdukpens skilled in honey harvesting, the loss of this indigenous occupation is feared by many.

On one hand, the Todas complain of losing their livelihood to State-sponsored afforestation, and the honey hunting tribes of Nilgiris, on the other, claim that reduced forest cover and erratic rainfall has adversely affected their income source.

While the buffalo and honeybee worshipping tribes of India are victims of climate change and outsider intervention, the country’s tiger worshippers had to pay a much bigger price.

In the name of ‘conservation’, around 450 families belonging to the Baiga and Gond tribes were evicted from their ancestral homes in 2014 to protect tigers in Madhya Pradesh’s Kanha Tiger Reserve.

This move was hugely criticized by environmentalists and activists, who believe tribals’ co-existence with the nature for centuries, has been indispensable to the preservation of our forests and wildlife.

The Baiga Scheduled Tribes have been victims of forced evictions since 1960. Stephen Corry, the Director of Survival International, a UK-based organization striving to protect tribespeople across the world, had said, “…Baiga communities who have carefully managed the tiger’s habitats over generations are annihilated by forced evictions. The irony appears to be lost on the conservationists. If India doesn’t allow the Baiga and Gond to return and prevent further villagers being kicked out, these communities will be completely destroyed. Evicting tribes won’t save the tiger.”

Time and again, tribals in India have proved that they are the best wildlife conservationists, the country can afford.

As per a report by Survival International, the tiger population in Karnataka’s Biligiri Rangaswamy Temple (BRT) Tiger Reserve had doubled from 35 in 2010 to 68 in 2014. The tiger tribe of Soligas was credited for this success by the field experts. After two decades of the fight put up by the Soligas for grant of tribal rights, they were allowed to co-exist with the wildlife.

2017 witnessed the forced eviction of 1,000 tribespeople

The increase in numbers of tigers is a living testament of the Soligas’ efforts to protect tigers. Victims of years of state oppression, tribal people have often been deprived of their own lands due to harsh conservation policies.

The year 2017 witnessed the forced eviction of 1,000 people belonging to the Bodo, Rabha and Mishing tribes from the Orange National Park in Assam. In the same year, 60 huts belonging to the Irular and Jenu Kurumbar Adivasis (recognized as Particularly Vulnerable Tribal Groups by the Indian government), situated in Vazhaithottam Village, Nilgiri District, Tamil Nadu were demolished to protect the ‘elephant corridor’ identified by the state government.

Despite cognizance of the tribal people’s contribution for the wildlife, little has been done by the Centre and States to respect their rights. The road to justice for India’s Adivasis is a long one, believes Mr. Rebbapragada. “In many parts of the country, tribes are being forced to move out. If they don’t, their electricity is cut, their Public Distribution System is cut so that they are coerced into leaving that place,” he explains.

“The tribespeople ask me if the government cares only about its tigers, and not the Adivasis.” In order to protect our biodiversity, it is important to understand the crucial role a tribe plays in this complex ecosystem. A tribe is not limited to a glossy magazine cover or a 3-hour documentary but is symbolic of an age-old culture, the forests, the hills, the desert, the coasts, the fishes, the birds, the predators, the prey – more like a holistic trademark of that particular region.

(Rituparna is a techie-turned-journalist who quit her career in software testing to write news stories. She recently post- graduated from the Asian College of Journalism, Chennai.)