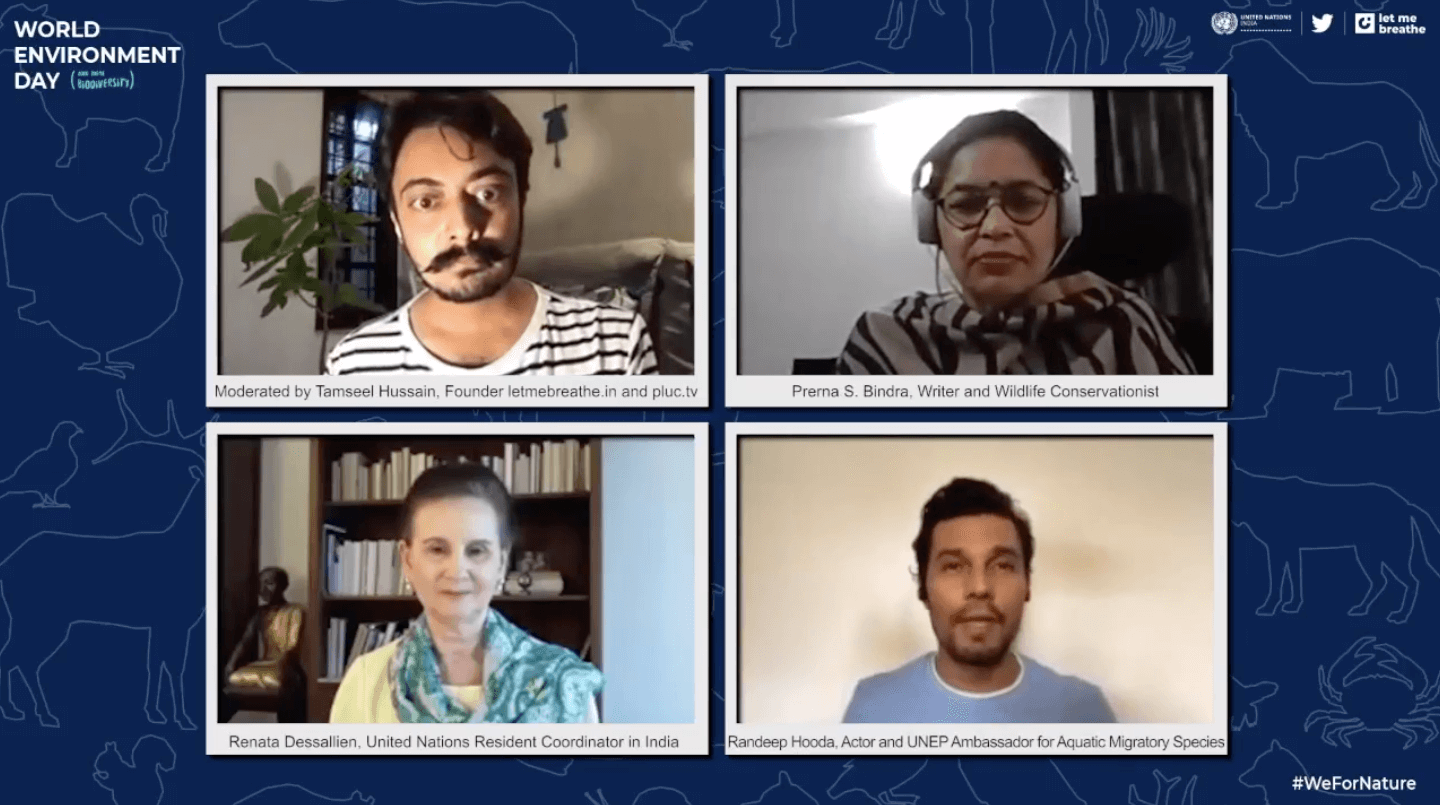 Live Session on World Environment Day ft. Randeep Hooda, Prerna Bindra and Renata Dessallien
June 5th every year marks the World Environment Day. This year, LetMeBreathe.in partnered with the United Nations India office to bring out ground reports about the health of India’s biodiversity. The initiative was supported by Twitter India. As part of it, a live panel discussion was also organized with Randeep Hooda, Actor & UNEP Ambassador for Aquatic Migratory […]

June 5th every year marks the World Environment Day. This year, LetMeBreathe.in partnered with the United Nations India office to bring out ground reports about the health of India’s biodiversity. The initiative was supported by Twitter India.

For 2020, the UN World Environment Day had the theme of biodiversity and its protection. Falling in the middle of the COVID-19 pandemic, in support of this global movement, illustrious and preeminent religious leaders, environmental advocates, celebrities, musicians and government officials celebrated World Environment Day with a variety of messages demonstrating their commitment to our planet’s biodiversity.

"From 2021-2030 we are entering the UN Decade on Ecosystem Restoration. We are part of one system and that needs to reflect in our mindset as well"- she added.

Prerna S. Bindra said, "Community-driven movements like Chipko Andolan and Project Tiger have all shaped India's biodiversity movement. Now we have seen children lead this in the form of climate strikes."

With the biggest challenge facing biodiversity reflected in the Kerala Elephant death incident, Prerna S. Bindra added “Effective implementation of the law, higher convictions, empowering forest officials but the biggest issue is to raise your voice when elephant habitats are being given away. Incidents like this are happening because the animal kingdom is losing its habitat.”

Actor Randeep Hooda who is also UNEP Ambassador for Aquatic Migratory Species implored the youth to get involved in protecting our biodiversity. “We need to start going to the ground, doing the ground-level work. It starts with small projects, I’ve tried to do that myself. Sometimes I’ve been successful, sometimes I’ve failed. But we as a collective need to do more.”

He added, "When we talk about biodiversity, we talk about planet Earth as a whole. If you take humans out of Earth, that we saw during COVID to a certain extent, nature actually flourishes. We need to relook at our activities."

Tamseel Hussain said, “Even in a pandemic, we need to stay vigilant to the threats to our biodiversity. It could be natural causes like Cyclones which have increased due to Climate Change or man-made causes. We need to speak up for our forests and wildlife now. It’s our responsibility as citizens to do that by building a community that helps protect our environment.”