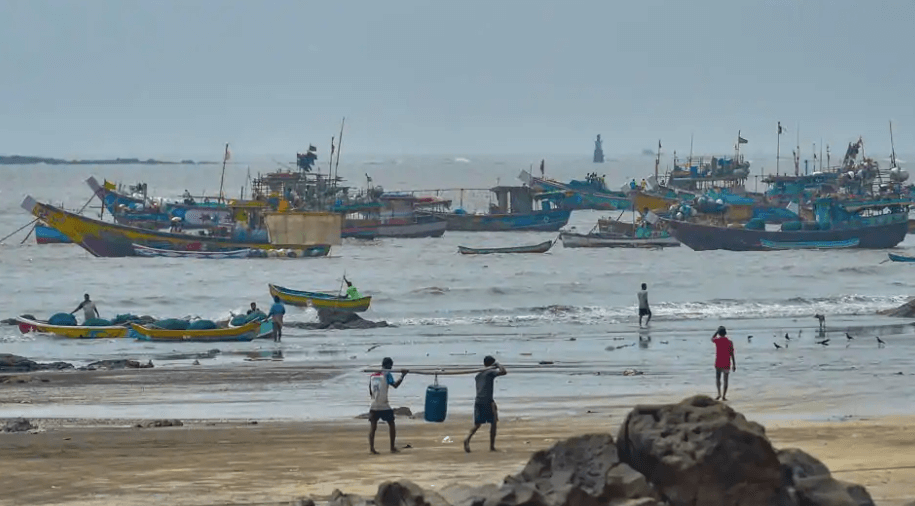 IMD DG Mrutyunjay Mohapatra said that landfall could begin any moment as outer wall region of Cyclone Nisarga is over Raigad district.

"It is very likely to move nearly northwards during next few hours, recurve north-northeastwards thereafter and cross north Maharashtra and adjoining south Gujarat coast between Harihareshwar and Daman, close to Alibag (Raigad District, Maharashtra) during the afternoon of June 3 as a Severe Cyclonic Storm with a maximum sustained wind speed of 100-110 kmph gusting to 120 kmph," National Disaster Response Force (NDRF) said.

Cyclone Nisarga is the first to hit Mumbai in over a century. This will be the second cyclone to strike India in two weeks.

In a tweet, Prime Minister Narendra Modi today said: "Took stock of the situation in the wake of cyclone conditions in parts of India's western coast. Praying for everyone's well-being. I urge people to take all possible precautions and safety measures."

The cyclone is passing the periphery of the Mumbai. It made landfall south of Alibaug and that helped reduce the impact of cyclone on Mumbai, IMD DG said.

No major impact of Cyclon Nisarga in Gujarat

No untoward incident has been reported in southern coast of Gujarat so far on Wednesday due to the severe cyclonic storm 'Nisarga', which has made landfall in neighbouring Maharashtra. (PTI)

Cyclonic storm 'Nisarga' may have already moved away from the seas off the Goa's coastline, but government departments are on alert to take on any eventuality: CM Pramod Sawant

Nisarga to Weaken into Deep Depression by Tonight

Cyclone Nisarga lay centered at 2:30pm over coastal Maharashtra close to Alibaug, 75 kilometers southeast of Mumbai and 65 kms west of Pune. It moved northeastwards and crossed Maharashtra coast close to south of Alibaug from 12:30 to 14:30 pm as a severe cyclonic storm with the wind speed of 100-110 kmph gusting at 120 kmph.

A meeting over video conferencing, chaired by Maharashtra Chief Minister Uddhav Thackeray is underway with district collectors to review the cyclone Nisarga situation in the state.

The rear part of the wall cloud region is still over the sea and the landfall process will be completed in one hour. Its current intensity near the centre is 90-100 kmph to 110kmph. It will move northeastwards and weaken into a cyclonic storm during next 6 hrs:IMD

Meanwhile, in Gujarat, nearly 50,000 people living in coastal areas south of the state and some 4,000 residents of the neighbouring Union Territory of Daman have so far been shifted to safer places ahead of the approaching cyclonic storm 'Nisarga', officials said today. Police have been deployed on all the beaches in Gujarat's coastal belt and people have been asked to remain indoors, they said.

About 43 National Disaster Response Force (NDRF) teams are deployed in the two states; of which 21 are in Maharashtra. Nearly 1 lakh people have been evacuated from the cyclone spot: SN Pradhan, NDRF Director-General

The center of the cyclone is very close to Maharashtra coast. The landfall process started and it will be completed during the next 3 hours. The northeast sector of the eye of severe cyclonic storm “Nisarga” is entering into land, says the IMD.

In view of cyclone Nisarga, no vehicular movement is permitted on the Bandra-Worli Sea Link: Mumbai Police

According to IMD's Cyclone E-Atlas, no weather system has turned into a cyclone and made landfall along the Maharashtra coast during June. Cyclone E-Atlas has been tracking tropical cyclones and depressions over the North Indian Ocean since 1891.

Storm surge warning, as issued by the IMD

Ten teams of the National Disaster Response Force have been deployed for rescue operations in view of the 'Nisarga' cyclone, which is likely to hit the west coast of Maharashtra on Wednesday, Chief Minister Uddhav Thackeray said on Tuesday.

With the monsoons imminent over the West Coast of India, the Western Naval Command has mobilized adequate resources for flood relief, rescue, and diving assistance in the event of excessive rainfall and flooding of both, urban and rural areas.

20,000 people from villages near Gujarat coast to be evacuated ahead of the cyclone: Officials

33 Teams Deployed in Maharashtra, Gujarat in View of 'Nisarga'

Thirty-three NDRF teams have been deployed in the coastal districts of Maharashtra and Gujarat in view of the impending Cyclone Nisarga, the chief of the federal contingency force said on Tuesday. In a video message, NDRF Director General (DG) S N Pradhan said, "Gujarat and Maharashtra have 11 and 10 teams respectively and they are being deployed in the coastal districts facing the Arabian Sea".