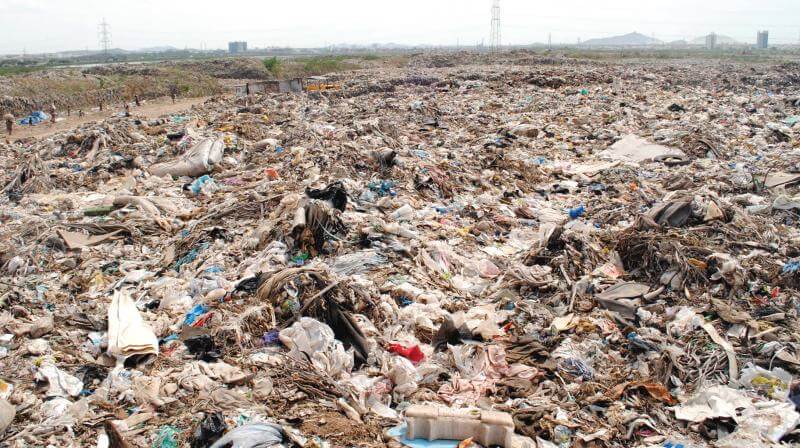 But, what any city should not be remembered for is poor waste management and low air quality. Unfortunately, Chennai is also remembered for those, by some.

Though the quantity of waste produced by the city has decreased by 600 MT since July 2019, the city is still the country’s largest solid waste producer. For a city that produces waste on such an alarmingly large scale, you would expect some efficient waste management efforts from the Govt. and a lot more mindfulness about the waste they produce, from the general public.

That is however, not the case here. According to the Tamil Nadu government's data, 68% of the waste generated is residential, 16% is
commercial, 14% is institutional and 2% is industrial. And when it comes to the form of garbage, 32% is green waste, 35% is inert materials like stones and rest are all plastic and other non-biodegradable materials.

All of these solid waste get dumped in two landfill sites, Kodungaiyur and Perungudi, without any segregation whatsoever. So, what happens to this landfill? Nothing. They just get accumulated (now as tall as a two storied building) and pollutes the land, water and air, creating a major ecological crisis and ecosystem degradation.

As per the American Environmental Protection Agency, an Air Quality Index (AQI) of 0-50 is considered Good; 51-100 is Moderate; 101-150 is Unhealthy for Sensitive Groups; 151-200 is Unhealthy; 201-300 is very unhealthy; and an AQI reater than 300 is Hazardous. But on any given day, the real time index shown by Aqicn.Org, in various part of the city
will show either “moderate” and “unhealthy for sensitive groups” and occasionally, even “unhealthy”.

According to the Respiratory Research Foundation, the poor air quality of the city has led to the increase in number of cases of Chronic Obstructive Pulmonary Disease or COPD (a progressive disease that is irreversible). So basically, breathing Chennai air is now injurious to health.

How is waste suffocating us?

The fact that poor waste management leads to water pollution and soil contamination, is a given. How it affects the air we breathe, is however, a lesser-known fact.

Although no particular study or statistics is available for Chennai alone, accumulation of solid waste as landfills is said to produce at least 10 toxic gases of which Methane (CH4) alone is 40-60%, and the reminder majorly, Carbon Dioxide (CO2).

These gases are naturally produced when organic matter decay. Although, methane isn’t considered an air pollutant, it is still the third biggest contributor of global warming. With poor air quality, excessive heat is the last thing we need to make our breathing more difficult than it already is.

Aside from the methane gas, other household and industrial chemicals like bleach and ammonia, that end up in landfills due to non-segregation of waste, can generate toxic gases that can greatly impact the air quality. Dust, particulate matter, including PM 2.5 and PM10 which are the major air pollutants are also released from the landfills, further contributing to the air quality issues.

A thesis submitted by Chowdhury et al 2017 in IIT Kanpur under Environmental science and policy states that emissions from biomass and open burning of waste contribute to almost 20–30% of the total air pollution in cities like Delhi and if we were to study the same for Chennai, it may show such similarly scary statistics.

For a change to be successful, it has to be implemented properly at the root/ core levels. Here, you and I are the roots:

 Learn about the different kinds of waste, how to appropriately dispose them and implement those in your own
homes and offices.

 Make your own compost so the food waste doesn’t end up in the landfill.

 When it comes to the food on your plate, only take what you need and finish what you take.

 Be mindful of your carbon footprint and reduce the waste you produce – avoid using single-use items that end up in the landfill like tissues, ATM receipts, paper cups etc.

 Don’t buy or use single-use plastic unless absolutely necessary. Always carry your own water bottles, bags, straws, and spoons

 Learn about what your local authorities, corporates, and capitalists are doing and demand corrective and remedial actions

None of the efficient waste management skills aren’t going to help if our segregated waste is all going to end up together in the same landfills again.

So, what the Governments and Industries do about this is of equal importance.

In February 2019, the Government of Tamil Nadu allocated a whopping Rs. 5,259 crores for remediation and reclamation of the two landfills where they had promoted the setting up of “waste-to-energy” plants in both the dump yards.

The current status of these plants, is, however, unknown. The Government has also has set up different bins for different kinds of waste in all the public places. However, since it is not actively engaging in creating awareness about it in the public, you can see that it is a clear failure.

What we have here is a complex, layered problem so unless we all rise to the occasion, change as individuals and communities (even by taking baby steps) and show the ones with power, influence and authority that we mean business, nothing is ever going to change. So educate, resist and agitate.

Because clean land, water and air is not only our birthright but also a borrowing we make from the future generations.