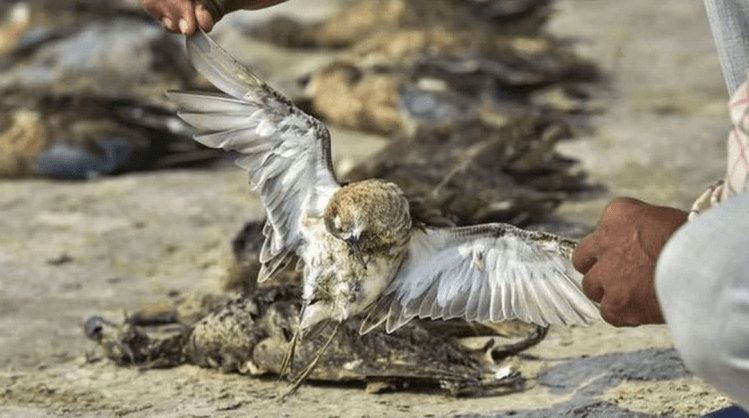 What killed thousands of birds at Sambhar Lake?
Thousands of migratory birds of about ten species were found dead around Sambhar Lake, the country’s largest inland saltwater lake near Jaipur, Rajasthan last year sending shock waves among locals and authorities.  Birds were seen floating dead in the lake, with their carcasses scattered on the edge of the 12 km catchment area. They included […]

Birds were seen floating dead in the lake, with their carcasses scattered on the edge of the 12 km catchment area. They included plovers, common coot, black-winged stilt, northern shovelers, ruddy shelduck, and pied avocet among many other migratory birds.

Bharati Chaturvedi, an environmentalist and a birder visited the lake and investigated what went wrong. She said, “We allowed people to illegally take out water out of this sambhar lake and we allowed them to electrocute birds.”

Hundreds of illegal salt units operate on Sambhar lake by private players that add to the woes of the residents and migratory birds.

“I am sitting near the lake and all I can see are more and more pipes around me. The question is who is running this parallel saltwater business? Why are they running it? Is it legal or is it in the sambhar salt lakes book of records?” said Bharati.

Salt mining at the lake is controlled by a public-private joint venture between Hindustan Salts Limited and the Rajasthan government. The lake currently produces 2,10,000 tonnes of salt each year.

Did poisoning, illegal mining or electrocution kill the birds?

The incessant pumping of water, naked electric wires and illegal structures, which is a violation of the forest rules, has become a common sight across the lake.

“Everywhere there are naked wires. These are the things that came underwater and many of these wires are not even insulated. So, they started releasing electric current into the water because there was so much rainfall this year. In fact, a large surface area was underwater. Despite being a highly protected area, nobody cared to really protect this area.” added Bharati.

Moreover, lack of water and drought has haunted Sambhar lake for years. The state government has been spending huge money to woo tourists through activities like ballooning, race, Bollywood shoots, etc. Crores of rupees have been spent on the upkeep of the narrow gauge train and watch stations, but birds and conservation issues were always overlooked.

In 2016, National Environmental Engineering Research Institute (NEERI) pointed out at the high pollution levels in the lake after which the National Green Tribunal directed the Rajasthan government in November 2016 to stop all illegal commercial activities around the lake. But, did the activities really stopped?

Bharati further added, “There was a convention called the Ramsar Convention, signed by India which made it protect wetlands that are designated Ramsar sites. If the lake is a Ramsar site, then we have breached an international convention we have signed by letting these birds die because we are allowing these illegal activities to continue.”

Earlier this month, the Opposition BJP moved an adjournment motion in the Rajasthan assembly against a notification issued by the state government to carry out commercial activities in the Sambhar Salt Lake catchment area. Deputy Leader of Opposition Rajendra Rathore alleged that over 2,000 units were involved in illegal salt mining in the catchment area, where tube wells had been dug and brine water was being stolen.

In reply to the adjournment motion, Forest and Environment Minister Sukhram Bishnoi said 22,976 birds died due to botulism, a disease common in Europe and North Africa.

"Action is being taken to shut down the illegal tube wells and hotels being run for the past five years in the Sambhar Lake area," the minister said, adding that the previous government had permitted a hotel to run without an NOC from the Forest and Environment Department.

The minister also said a wetland authority and a standing committee had been constituted for the management of the lake and look into all aspects of activities being run in its catchment area.