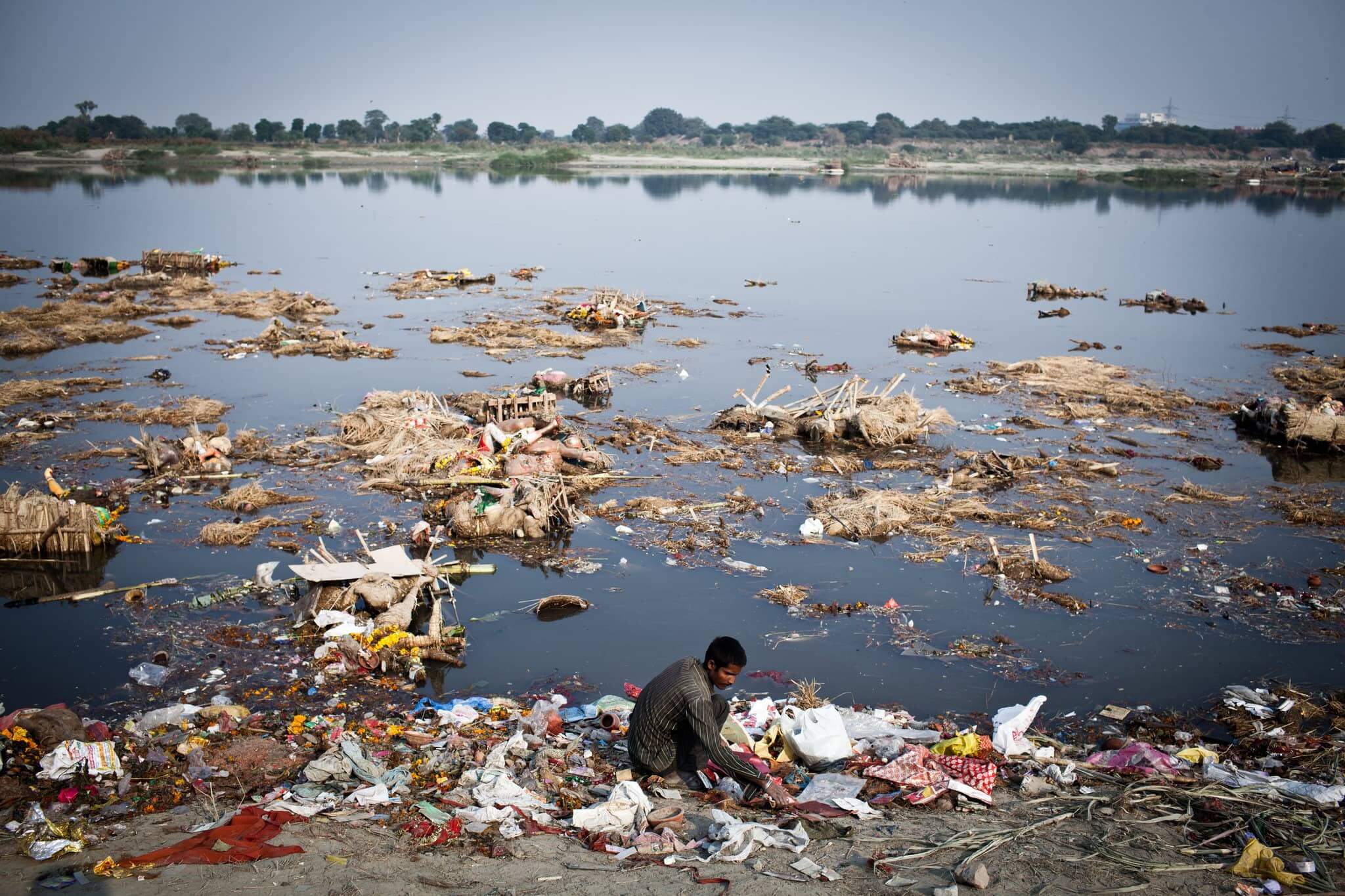 River Yamuna is gasping for life
9
Due to outflow of unimaginable amounts of pollutants and industrial wastes, river Yamuna is now ecologically dead

From times immemorial, River Yamuna has been the primary source of water and consequently life for the City of Delhi.

However, due to continuous neglect and outflow of unimaginable amounts of pollutants, sewage, and industrial wastes into the river for the last many decades, river Yamuna is now ecologically dead.

No aquatic life left in Yamuna

The 22-km stretch along the national capital has virtually no aquatic life - thanks to over 20 drains that pour untreated sewage and other waste into the river. Low levels of dissolved oxygen (DO) and a very high degree of pollution are the reasons that killed the river.

The current level of DO in the river is only around 1 mg per litre, while it should be between 4 to 5 mg/l to sustain life. Ammonia levels, which should to be at a maximum level of 1.2 mg/l, also shoot up to 12 mg/l at some points in the city. In the urban stretch of Yamuna, there are no phytoplanktons or zooplanktons left. They have vanished.

Upstream from Wazirabad, the river is home to turtles, different species of fish, crocodiles and an abundance of aquatic plants and phytoplankton. But as it enters Delhi, the river starts to die.

Yamuna, one of the most polluted rivers in the world

Till 1909, the waters of the Yamuna were distinguishable as clear blue, when compared to the silt-laden yellow of the Ganges and the river was at the center of Delhi’s life. However, due to high-density population growth and rapid industrialization, Yamuna has become one of the most polluted rivers in the world

The water of Yamuna is of "reasonably good quality" through it’s the length from Yamunotri in the Himalayas to Wazirabad barrage in Delhi; but below this, the discharge of wastewater through untreated drains between Wazirabad barrage and Okhla barrage renders the river severely polluted.

More than three-quarters of the pollution of the Holy Yamuna, is found in a small stretch in Delhi – about 14 miles – that covers roughly 2 percent of the river’s total length.

The three main kinds of pollution in the Yamuna are sewage, industrial effluent, and solid waste.

Untreated sewage is the biggest pollutant which goes into the Yamuna river. More than 40 percent of the city has no sewer connection. DJB says it has increased its sewage treatment capacity from 284 MGD in 1995 to 512.4 MGD today, which means at least 30 percent of sewage still remains untreated going by official data.

However, experts estimate that the actual amount of untreated sewage is much more than this.

In the Year 1957, the River Thames flowing through the heart of London was declared to be ecologically dead. The water was so polluted that if someone fell into the river he was more likely to die due to poisoning than of drowning. But committed efforts from the Government and the Civil Society ensured that the river was cleaned up.

After it’s clean-up, the Thames now supports a huge diversity of fish. The “Great Stink” has become a different place altogether. The Thames is now home to 125 species of fish and more than 400 species of invertebrates. River cruises through it’s clean flowing waters form a major tourist attraction and its waterfront is at beautiful as it gets.

I sincerely believe that If they can do it, then we can do it better.

I and most of the citizens of Delhi, dream of a day when clean blue waters of Yamuna will flow through our city again. The beautiful waterfronts would once again be part of our cities social and cultural life.

I dream of sipping coffee on riverside cafes and going on relaxing cruises of our great river. I do not want to be jealous of London and Paris for their great rivers. I want my Yamuna to be just cleaner and better than Seine and Thames.

Cleaning of Yamuna is not rocket science. Basic steps like ensuring setting up of effluent treatment plants which ensure that no untreated sewage and industrial pollutants is released in the river; increasing the water flow of the river; protection of flood plains; will go a long way in ensuring that the Yamuna survives.

Yamuna has given life to our city of Delhi for thousands of years. Now, it is our turn to save it and give it life.

The issue of revival of Yamuna was brought before the National  Green Tribunal by noted environmentalist Mr. Manoj Mishra and the NGT vide it’s order dated 13-1-2015 formulated a blueprint for revival of Yamuna. The said plan was named “Maili Se Nirmal Yamuna Rejuvenation Plan, 2017’' which was to be complied with, by end of the Year 2017. However, due to delays by various state governments and agencies, the implementation of the Rejuvenation Plan has still not been completed. The Yamuna remains as polluted as ever.

The point of no return is not very far and if immediate steps are not taken for revival of Yamuna now then soon it may be too late. Unfortunately, the issue of Yamuna Pollution has ceased to remain an issue in the minds of the people. Everyone seems to have given up on it and has accepted its condition.

Since there is no public outrage over the dirty smelly waters of Yamuna, therefore the river has quickly slipped off the priority list of the political leaders & governments, in spite of best efforts by NGT and environmentalists like Mr. Manoj Mishra.

Petition to revive the Yamuna

Therefore, I have started this petition on Change.Org so that the critical condition of Yamuna may come to the fore.

I feel that the state of Yamuna is one of the most serious problems facing Delhi and northern India and when people will read the petition and sign it they will think about the condition of the river and will be outraged not only about the neglect of the river by the government but also by us the people.

The Yamuna can only be revived when the people start raising their voices in support of the demand to #ReviveYamuna. The voice of the people cannot be ignored for too long in a democracy.