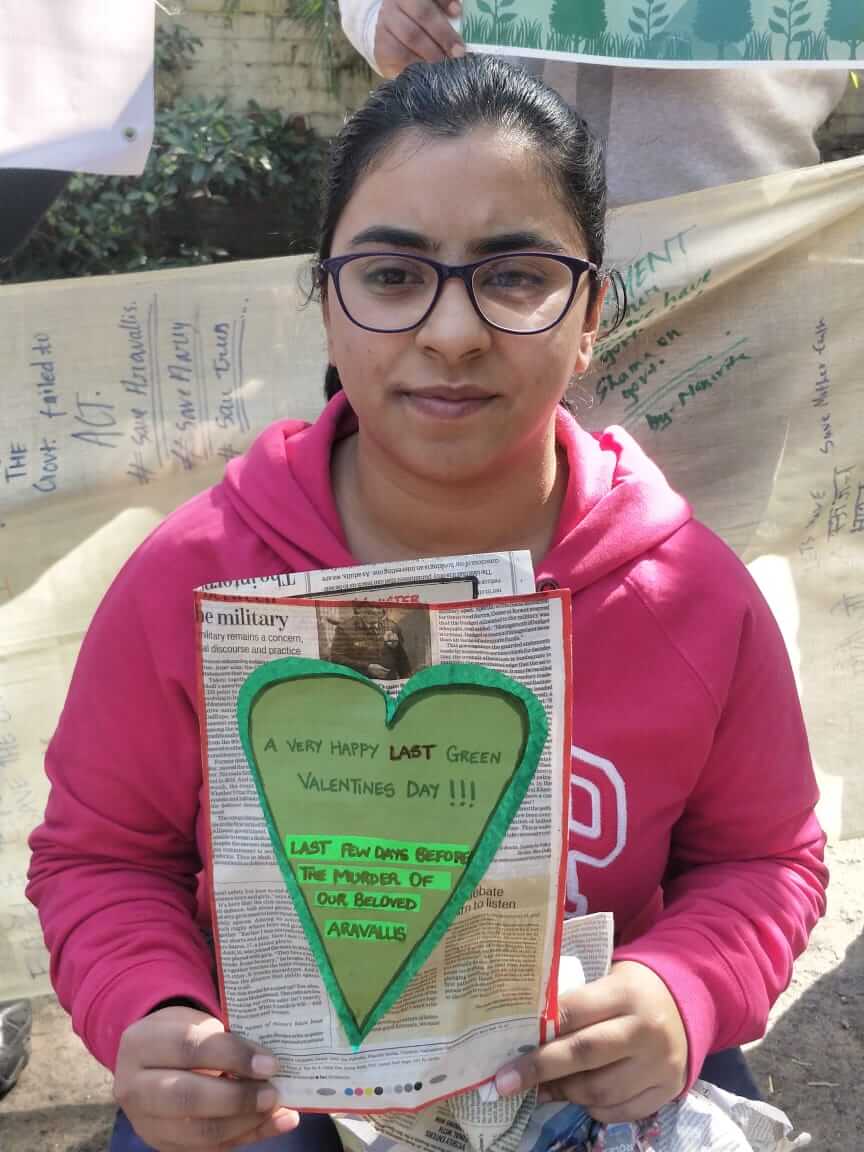 A silent valentine’s for Aravalli
Valentine’s Day, 14th of February 2020, was a special day in the history of the Aravalli Bachao citizens campaign against the Punjab Land Preservation (Amendment) Bill 2019, tabled and passed by the Haryana state government last year on 27th February 2019 amidst huge protests by citizens in the National Capital Region and walkout by opposition […]

Valentine’s Day, 14th of February 2020, was a special day in the history of the Aravalli Bachao citizens campaign against the Punjab Land Preservation (Amendment) Bill 2019, tabled and passed by the Haryana state government last year on 27th February 2019 amidst huge protests by citizens in the National Capital Region and walkout by opposition parties.

In a unique form of silent protest, college students from Delhi University accompanied by a few adults from Gurgaon went to the Haryana Bhawan at Copernicus Marg in New Delhi with a Valentine’s Day card and petition letter addressed to Mr. Manohar Lal Khattar, the Chief Minister of Haryana.

The card made out of recycled newspaper in the shape of a green heart with a few leaves and twigs pasted inside to represent the Aravalli forests was presented to the officiating Resident Commissioner by the students. The card said, “Respected Chief Minister, A Very Happy Last Green Valentine’s Day! This is a plea from an unborn child, a pregnant woman, little children, teenagers, adults, and ailing people. Please don t destroy our Aravallis. The future of your family, as well as ours, is in grave danger. We don t need development at the cost of our trees. Please save our Aravalli forests!”

The formal petition letter signed by all the students and adults was given at the CM’s desk. A file number to track the same was given back to the students with the receiving note.

Simran, a student from the College of Vocational Studies in Delhi who had made the Valentine’s Day card said, “We wanted to convey to the Haryana CM that our future is at stake. We love our Aravallis and will not allow our forests to be destroyed in the name of development.

Aravalli forests cover less than 10% of Gurgaon and South Haryana and less than 2% of the entire state of Haryana. We have written to Mr. Khattar in our petition that the Aravallis must be protected as a home for wildlife and for the other critical environmental benefits these forests provide in terms of being the green lungs of NCR, water recharge zone and our shield against desertification.”

Ayush, a student from the Delhi School of Social Work who went inside the Haryana Bhavan to hand the card and the petition letter said, “By this unique protest on Valentine’s Day, we wanted to tell the Haryana CM that in this time of climate crisis when India is the 5th most vulnerable country to climate change, the youth is very saddened by this Punjab Land Preservation Act (PLPA) Amendment Bill which seeks to open 74,000 acres of our pristine forest areas in the Aravalli range around Delhi, Gurgaon, Faridabad in South Haryana and Shivalik hills near Chandigarh when the state of Haryana already has the lowest forest cover in India, just 3.59%, which is way below the national average of 20% forest cover.”

"By this unique form of protest and grievance lodging, following due process, the young students not only set the tone for a beautifully thoughtful appeal, as the next generation; but also claimed the moral high ground in the story of the Punjab Land Preservation Act (PLPA) Amendment Bill and its legislative and judicial saga over the last one year," said Zain Khan, one of the senior Aravalli campaigners who accompanied the students inside Haryana bhavan.

Nayan Agarwal, a young girl who lives close to the Aravallis in Gurgaon and student of LSR college said, “Delhi, Gurgaon and NCR cities are already one of the worst areas in the world when it comes to breathing toxic air. Without the Aravallis, our green lungs, how will we survive? If our Aravalli forests are destroyed for real estate development, the National Capital Region will become unlivable as we will choke in the dust storms coming in from the Thar desert. As of now, Aravallis is the only shield that protects us from desertification.”

Rajasthan has already lost more than 31 hills to illegal mining. “In Mewat too from where I belong, rampant illegal mining is destroying the Aravallis. The PLPA Amendment Bill is the icing on the cake and the final death knell for the Aravallis”, said Suhail Mujeeb, one of the students.

Anuradha Prasad Dhawan, one of the senior Aravalli Bachao campaigners said, “If the PLPA Amendment Bill is notified, 60000 acres of the Aravalli forests will be opened for construction. Additionally, at great risk of destruction are another 50,000 acres of Aravalli forests that do not have protection of any forest law. This means that effectively the entire Aravalli range in South Haryana amounting to more than 1,10,000 acres will get impacted by this government move to implement the amended PLPA.”

“As citizens from different walks of life, we will continue protesting and raising our demand for the withdrawal of the PLPA Amendment Bill until the Haryana government does so. We would like to see many more citizens join the citizens movement to protect our Aravallis. Please follow us on Twitter, Instagram and Facebook. Our hashtag is #AravalliBachao,” said Neelam Ahluwalia, another senior Aravalli campaigner.