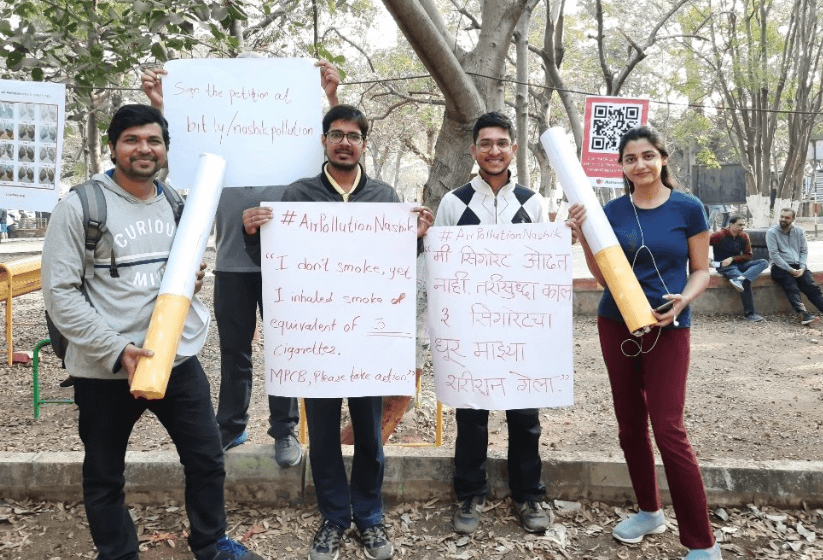 Nashik, famous for its serene weather and clean air may no longer remain in the same because of its growing air pollution.

In the last couple of years, Nashik's air quality is worsening consistently, but the perception of ‘city of clean air’ and serene weather is not changing. So, when this winter season, even when AQI hit 180, it never became a part of mainstream news.

The reason being no active campaigns by CPCB, Maharashtra Pollution Control Board (MPCB) and Nashik Municipal Corporation (NMC) about rising air pollution. These local bodies are not publishing any warnings/advice about tackling health issues due to air pollution in the city.

Moreover, Nashik has only one continuous monitoring station by CPCB. The pollution levels are published quite late on MPCB website. (Almost after two months than the actual date).

So the burden is ultimately on campaigners, NGOs, and volunteers who care for the city's air.

With less time, low resources and only four people in a team, we decided to do something that will attract the attention of citizens but will also be an informative alternative to distributing pamphlets, printing flex or other usual campaign tactics.

Recently, I and my friends launched a campaign on Jhatkaa.org (https://act.airalert.in/petitions/mpcb-penalise-polluting-industries-in-nashik) keeping our two simple demands: Penalise Industries not adhering to the MPCB norms in Satpur MIDC and release the Satpur Air Quality Monitoring Station data from 29th October 2019 on MPCB website. We demand that the health of the people of Nashik be made a priority. The air quality of Nashik must not be neglected with increasing industrialization.

The second initiative which we took was calculating how many cigarettes a person has to smoke to match the smoke he/she is inhaling for a full day through pollution in the city. We also used an app called “Sh**t I smoke” to get the number right. The data we used for this is gathered from Nashik's air monitoring station readings.

Being from an Engineering background, it was easy for us to find this data and calculate these values.

Next, we made props in the form of giant cigarettes. The next day we visited a jogging track in the city called Krushinagar jogging track. In the span of two hours, we were able to attract hundreds of joggers without much hassle.

We also managed to attract local media attention. We are also expecting that more and more engineers, students with scientific temper should join the movement in innovative ways so that we can reach and educate more and more people even if we are standing alone in the street.

(Roshan works with jhatkaa.org on 'Air Pollution in Maharashtra' as a Marathi campaigner.)