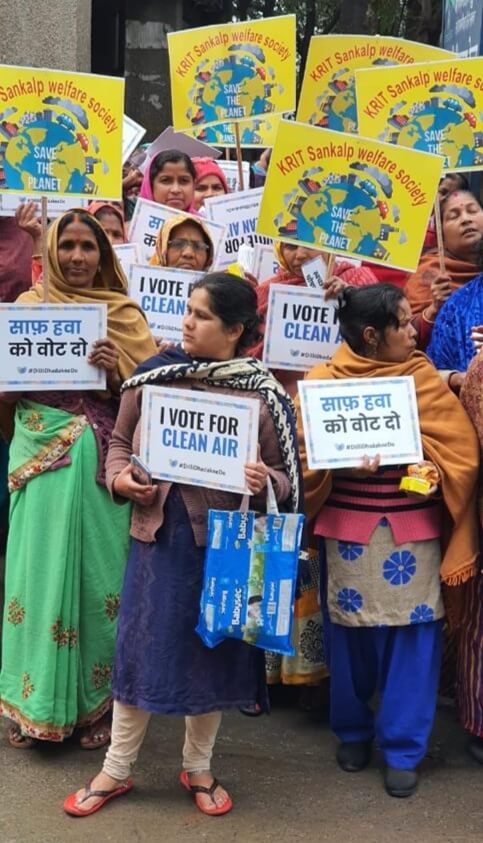 #DilliDhadakneDo: Making air pollution the central poll plank in Delhi
Delhi has earned the infamous tag of being the most polluted capital city in the world and over the years air pollution has become an issue of public health emergency in the NCR region. The ‘Lancet Commission on pollution and health’ reported 9 million premature deaths stemming from air pollution in 2015 all over the […]

Delhi has earned the infamous tag of being the most polluted capital city in the world and over the years air pollution has become an issue of public health emergency in the NCR region. The ‘Lancet Commission on pollution and health’ reported 9 million premature deaths stemming from air pollution in 2015 all over the world, where more than 2.5 million of these deaths were reported from India, the most in any single country.

Other studies have shown that children are at the greatest risk of this problem and over lakh children died in 2018 due to air pollution. The scenario in Delhi is not different. Essentially, continuous poor and severe air quality of Delhi tops the charts making it an unlivable city of India.

Air pollution does not selectively target people in terms of economic status and social background although due to lesser capacity poor and vulnerable class suffers more and becomes more victim of this threat. Despite increasing media attention and growing citizen concern, making air pollution a formidable issue in the election and agenda of parties was a huge challenge and task for us.

For ensuring a cleaner and safer air, #DilliDhadakneDo campaign was initiated as citizens group led a movement, which placed emphasis on making air pollution a central poll plank in the Delhi assembly election and holds public representatives accountable for lasting solutions.

In this connection, a ‘Manifesto for Clean Air’ was placed before all major political parties for soliciting pledge and seeking commitments on a ten-point agenda for tackling the air pollution and associated hazards.

Air pollution, a central issue in all political parties' manifesto

The beauty of this campaign, and proud moment for us all, is that citizens groups have been successful in shifting the narrative and putting air pollution a central issue in the election manifesto of all leading contesting parties namely Aam Adami Party, Bhartiya Janta Party, Indian National Congress etc.

It is heartening to see that for the first time, political leaders and candidates across all parties and ideologies are talking seriously about air pollution in unison in the context of elections.

In our outreach activities of seeking commitments and signing pledge, around 48 candidates of 25 assembly seats across all parties supported our initiative and chief signatories among them were Krishana Tirath, Sandeep Tanwar and Shivani Chopra from Congress; Vikram Vidhuri, Anil Sharma, Manish from BJP and Raghav Chadda, Parveen Kumar and Sourabh Bhardwaj from AAP.

Considering the political economy of air pollution is the hugely complex and political class and government are the most important stakeholders for policy shift and program implementation. This is indeed a matter of pleasure that almost all candidates and parties supported our initiative and many candidly urged us not to let the momentum derail and keep bringing air pollution issue at the forefront again after the election so that an all-round and farsighted approach on resolving this crisis can be met.

We felt enormously motivated in meeting with a number of political leaders and candidates who were welcoming and encouraging and pledged their help in the future as well. We are indeed happy to see that political class has been approachable and they have been supportive of this campaign and its objectives.

We are grateful to all the candidates, leaders and workers of all concerned parties in acknowledging our initiative and campaign. I am also thankful to people behind all participating resident welfare associations, citizens groups and volunteers in realizations of objectives of this campaign.

For #DilliDhadkaneDo, its people, politicians, and citizen groups have been a bedrock for this great initiative. Together we can make a difference!