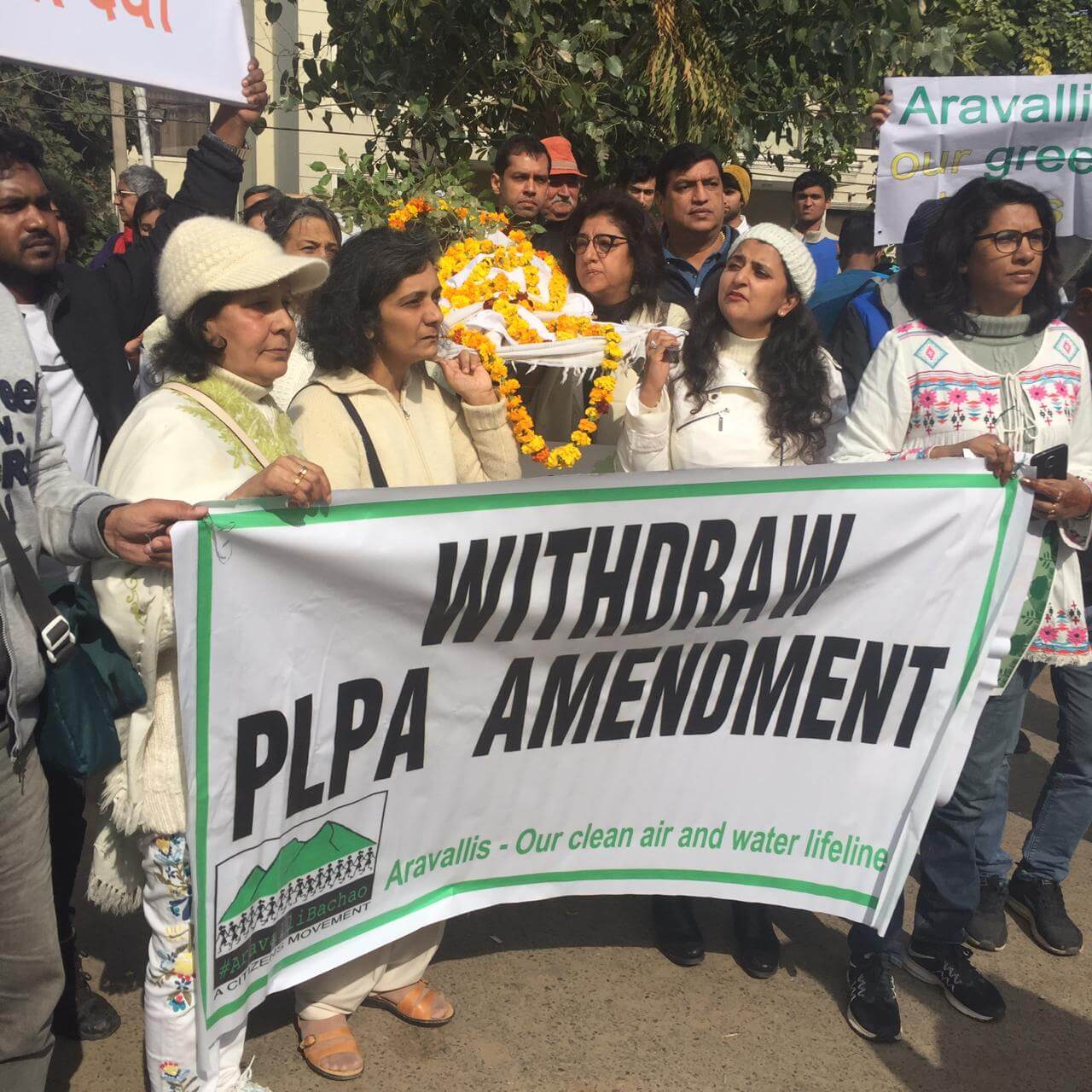 To highlight the danger looming over the Aravalli forests, over 100 concerned citizens from Delhi, Gurgaon, and Faridabad took out a symbolic funeral procession or a ‘janaza’ march on 19th January 2020 from Sikanderpur metro station to MG road metro station. The group conducted a 30-minute long ‘Shok Sabha’, or condolence meet, where concerns over […]

To highlight the danger looming over the Aravalli forests, over 100 concerned citizens from Delhi, Gurgaon, and Faridabad took out a symbolic funeral procession or a ‘janaza’ march on 19th January 2020 from Sikanderpur metro station to MG road metro station.

The group conducted a 30-minute long ‘Shok Sabha’, or condolence meet, where concerns over the future of the Aravallis were raised by multiple environmentalists and citizens. People shouted slogans like “Withdraw PLPA Amendment Bill”, “Aravalli Bachao”, “Stop illegal constructions in our forests”.

Dr. Sarika Verma, a Gurugram-based environmental campaigner said, “The Punjab Land Preservation Act (PLPA) Amendment Bill 2019 which has been signed by the Haryana Governor is the death knell for our forests. If notified, 60000 acres of PLPA protected Aravalli forests and 10000 acres of Shivalik forests near Chandigarh will be opened for real estate development,”

She further added, “This amounts to a loss of 33% of our forests when Haryana already has the lowest forest cover in India – barely 3.62% as compared to the national average of 20%. Additionally, at great risk of destruction are another 50,000 acres of Aravalli forests that do not have the protection of any forest law. This means that effectively the entire Aravalli range in South Haryana amounting to more than 1,10,000 acres will get impacted by this government move to implement the amended PLPA.”

This amended bill seeks to make the Punjab Land Preservation Act totally redundant in Haryana. The retrospective provision since 1966 nullifies all notifications made under the act since the formation of the state of Haryana.

The amendment bill also has blanket provisions that will make PLPA redundant in current and future urban areas including master plan areas and municipal areas. Any land notified under the amended act in the past, present and also in the future in the state can be exempted by simple government order.

“This PLPA amendment bill seeks to only benefit the real estate sector at the cost of forests, wildlife, water security, air quality and the health and well-being of millions of men, women, and children living in NCR cities including our future generations and thus needs to be withdrawn by the newly elected Haryana government,” said Roma Vinayak, a concerned citizen from Gurugram who was present the march.

Many school and college students were also part of the march.

”Having come from Gujarat, I grew up in the lap of the Aravallis. Delhi and NCR’s air pollution will become worse if the Aravallis are constructed upon as these are the only natural barriers protecting us from the sand storms coming from the Thar desert,” said Anurag, a student from Delhi University.

Veer, a 10th-grade student said, “The natural ecosystem of the Aravallis are also a critical wildlife habitat and a biodiversity hotspot with 400 species of native trees; 200 native & migratory bird species, 100 butterfly species, mammals such as leopards, hyenas, jackals, nilgais, porcupines, mongoose, civet cats as well as many reptiles. “Instead of protecting the Aravallis and declaring it a bio reserve and wildlife sanctuary, the Haryana government is hell-bent on destroying this precious wildlife corridor through this disastrous PLPA amendment bill.”

To show solidarity with the Aravallis, the citizens held hands and took a sacred oath to be the voice of the forests and the birds, butterflies, mammals, reptiles and insects that live there.

“Awareness about saving the Aravallis is on the rise and the citizens’ movement is growing strong not just in NCR but all over India with people in different cities joining the cause on Twitter (#AravalliBachao) and other social media. It remains to be seen if the Haryana government will pay heed and withdraw the regressive Punjab Land Preservation Act Amendment Bill to protect our Aravalli forests,” said Neelam Ahluwalia.