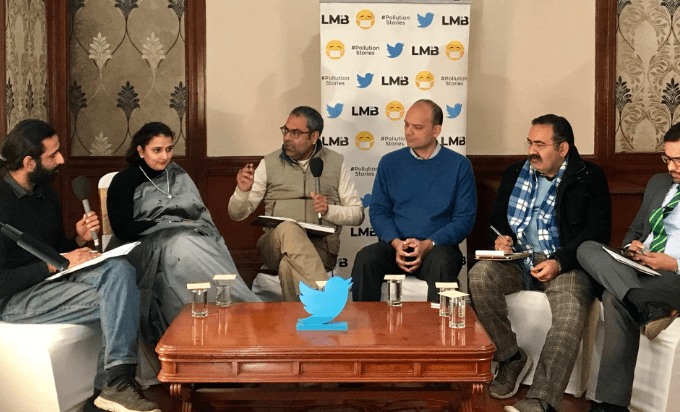 Chapter 7: City Session Gurugram
City Sessions is a collaboration of a live show between Twitter India and Let Me breathe, where decision makers, experts and citizens come together to find short term and long term solutions to city level climate change, air pollution and other environment issues collectively.

Let Me Breathe hosted its seventh city session with Twitter India in Gurugram on January 16, 2020, with the aim of finding collective solutions to environmental issues of Gurugram.

Previously held in Chennai, Nagpur, Mumbai, Varanasi, Gangtok, and New Delhi, the City Sessions are aimed at building a talking space between decision-makers, citizens and young people that are focused on climate change in their city.

The panelists interacted live with citizens on twitter to tackle some of the most pressing questions online and also shared their solutions to tackle pollution in Gurugram.

According to Barun Aggarwal, Co-Founder, CareForAir, the first step towards any kind of air pollution mitigation is measurement. “You need to have good quality data to take the first step which is not there at the moment," he said.

While Dr. Sarika Verma spoke about how "air pollution affects your brain and reduces the capacity of your lungs to even affecting an unborn child. Even non-smokers are getting lung cancer."

"What we are discussing today is above all political parties," added BJP's Raman Malik, while highlight the initiatives being taken by the BJP government in Haryana.

Congress' Ashish Dua said that "improving water quality and air quality are of utmost importance as these are the basic rights of the citizens. But sadly, the money needed for action on the ground is lost in personal publicity."

BJP ally in Haryana, Jannayak Janata Party's Prateek Som said, "Our leadership cares for the environment and any kind of hamper to forests will not be done under us for sure." He maintained his party's differing views from their alliance partner, BJP on the Punjab Land Preservation Act 2019, which had come under fire from civil society activists as it repurposes Forest Land for commercial use.

Looking at the solutions, Dr. Sarika said, "The Government needs to plan to increase the forest cover to 5% in the next five years which is directly proportional to the air we breathe."

The government representatives from the BJP and JJP asked citizens to be more involved with the government. Raman Malik from the BJP emphasised on the need to start caring for the environment at an individual level, "in our meetings, we have stopped the use of single-use plastics" he added. He also said that plant as many trees as possible even if 5% of trees survive, you will start seeing change."

"We need to reduce consumption and also focus on population control," added Barun Aggrawal focussing on the scale of the human impact of pollution.

City Sessions are an effort to mainstream the city-specific conversation on the environment. If you want a city session in your state/city, reach out to us.