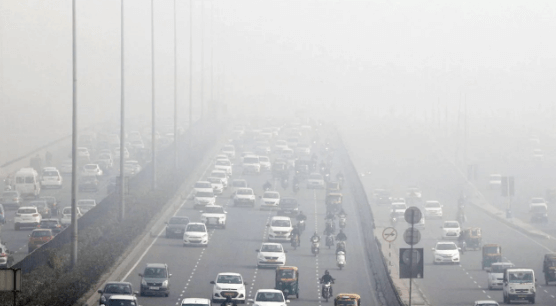 A study by IQAir and Greenpeace found Gurugram to be the most polluted city in the world in 2018. The air quality in Gurugram was found 17 times more miserable than the prescribed safe limit by the World Health Organisation (WHO), mainly due to fine particles in the air.

Fine particulate matters are a severe health threat, especially those that are less than 2.5 micrometers, also called PM2.5. These fine particles travel deep into the respiratory tract and deposit in the lungs causing all kinds of health issues from simple allergy to deadly cancer.

Vehicular emission accounts for 40% of PM 2.5

Whether working professionals or schoolgoing children, housewives or senior citizens, the majority of Gurugrammers suffer throughout each day because of such high pollution levels.

There are multiple sources behind Gurugram’s toxic air, but unfortunately, the city does not have any source apportionment study. But Delhi has several such studies which indicate the causes of what pollutes the air.

A study by the Indian Institute of Tropical Meteorology (IITM) study found that vehicular emission accounts for almost 40% of PM 2.5 concentration in Delhi NCR.

The share of vehicular emission may even be higher in Gurugram because it lacks public transport and also has a substantial freight movement through the city. Yes, cleaning Gurugram air will require sustained action on all fronts, including solid waste burning, construction activities, power supply, etc.

However, switching to zero-emission vehicles will do wonders for cities’ toxic air.

Recently, the Delhi Government approved the electric vehicle (EV) policy. The policy aims to add 35,000 new vehicles in the next one year and 500,000 in the next five years.

The policy seeks that one in every four vehicle registration will be electric in Delhi by 2024. EVs are even more critical for Gurugram because, unlike Delhi, which has a restriction on industrial activities, the city can leverage it for improving its economic base.

EV policy and a roadmap will be a good starting point for the city.

(Sarika is the associate director of Nagarro and Founder Trustee, Raahgiri Day)