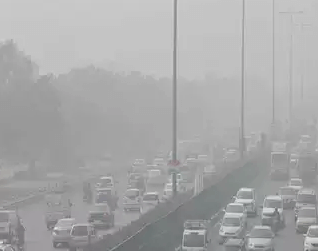 Why is Chennai Choking?
Delhi might have dominated the headlines when it comes to air pollution, but sadly other cities in India seem to be catching up.  Chennai is one such city. The city has seen a spike in the air quality levels. It’s so bad that experts have said breathing in the air in Chennai is equal to […]

Delhi might have dominated the headlines when it comes to air pollution, but sadly other cities in India seem to be catching up.

Chennai is one such city. The city has seen a spike in the air quality levels. It’s so bad that experts have said breathing in the air in Chennai is equal to smoking 3.5 cigarettes every day. This includes everybody in Chennai even children.

Here’s how the air pollution story has been unfolding in Chennai.

I did a bit of data research on the Central Pollution Control Board’s air pollution data –1 specifically PM 2.5 levels – at IIT-Madras, Alandur and Manali monitoring stations for the 365 days ending November 5, 2019.

PM 2.5 refers to microscopic particulate matter that is less than 2.5 micrometers in size. PM 2.5 is a good indicator and measure of pollution as it exerts high toxic effects.

If you observe the above table, you’ll notice a spike in PM2.5 from November 3 to November 4. In IIT-Madras and Alandur, for instance, pollution worsened from “Moderately Polluted” to “Poor.” In Manali, it worsened from “Poor” to “Very Poor.”

Even if the air is  “moderately polluted”, it will reduce one’s life years. One study found that average life span increases by four months for every 10 ug/m3 drop in PM 2.5.

The levels recorded in Chennai from November 3 to 5 ranged from “Very Poor” to “Poor”.

The above data shows that Manali station had a total of 119 bad air quality days. Of this, 13 were days when PM 2.5 levels ranged from “Very Poor” to “Severe”. Same with Alandur, which recorded four days of “Very Poor” and four days of “Severe” pollution in the last year.

Is North India responsible for air pollution in the south?

Chennai has 3,300 MW of coal-fired thermal power plants and a 10 million tonne per annum petroleum refinery which is enough for severe air pollution to take place.

Even though, pollution plumes may travel and cause a slight decrease in air quality, a noticeable spike in polluted areas like Chennai city is unlikely. Sources of pollution in Chennai have been discharging pollutants for the spike to happen.

I looked at TNPCB’s Care Air Centre real time air monitoring data from NTPC’s Vallur power plant and TANGEDCO’s North Chennai Thermal Power Station. Emissions of oxides of Nitrogen from NTPC Unit 3 and Unit 1 were consistently above the prescribed standard of 300 mg/m3 and ranged between 525 and 620 mg/m3 – more than twice the accepted levels.

Sulphur dioxide levels for the same duration ranged from 910 to 1000 mg/m3 – the maximum recordable by the SO2 sensor – for Unit 3. Meanwhile, Unit 1’s emissions were consistently above the highest detection limit of the sensor and clocked a steady 995.9 mg/m3.

A Pollution Board official in an interview said, “There is nothing to be alarmed of. These levels of PM 2.5 are only temporary due to the weather.”

The official also said that they “are continuously monitoring industries and taking steps to reduce emission levels if they cross levels.”

But where are the results? I just monitored the TNPCB’s monitoring system and found that emission levels have crossed levels, including maxing out at more than 1000 mg/m3 of SO2 at Units 1 and 3 of NTPC’s plant in Vallur (see charts above).

To see if they were continuously monitoring, I looked at the real-time monitoring data from the 43 sensors located atop more than a dozen stacks at the Chennai Petrochemical Ltd’s (CPCL) refinery in Manali. Not a single monitor was working.

So next time, when you feel out of breath in Chennai, like the Pollution Board representative believe that ignorance is bliss.