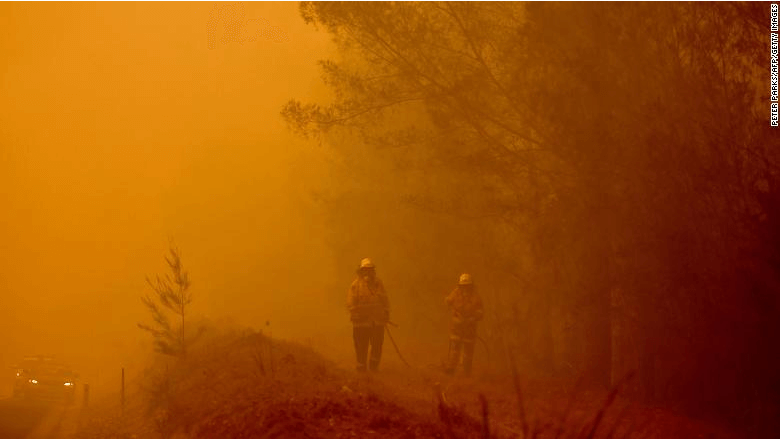 Three fires combined that are raging across Australia have burned more than 12 million acres – bigger than the size of Manhattan. It’s one of the most catastrophic fires in the country’s history.  The fires joined overnight in the Omeo region in Victoria state, creating a 6,000-hectare (23 square miles) blaze, according to Gippsland’s Department […]

Three fires combined that are raging across Australia have burned more than 12 million acres – bigger than the size of Manhattan. It’s one of the most catastrophic fires in the country’s history.

The fires joined overnight in the Omeo region in Victoria state, creating a 6,000-hectare (23 square miles) blaze, according to Gippsland’s Department of Environment, Land, Water, and Planning.

The blazes have burned through more than 14.8 million acres or 23,000 square miles and killed at least 20 people. More than 1,000 houses have been destroyed, hundreds more damaged.

Nearly half a billion animals are also feared dead across Australia, including a third of the koala population in their main habitat in the state of New South Wales.

Ecologists at the University of Sydney estimated that 480 million mammals, birds, and reptiles died in the blazes that have swept the nation since September.

Pollution levels have also risen in Australia because of the wildfires. On January 1st, Australia’s capital recorded the worst pollution it’s ever seen, with an air quality index 23 times higher than what’s considered “hazardous.”

Firestorms are not new to Australia

While wildfires can occur there year-round, Australia goes through a fire season during their warmer months because the hot, dry weather and wind makes it easy for flames to spread.

This year, the combination of 40C temperatures and strong winds has caused the fires to spread.

Several unique weather patterns came into existence over the country to create the hot, dry conditions behind the fires this season. But climate change is a major factor, with average temperatures rising across Australia and the most populated parts of the country receiving less rainfall over time, worsening the risk of extreme wildfires.

The fires have even reached every major city in the country.

Fires burned in all directions outside of Sydney, including a fire near the Blue Mountains which has already destroyed an area larger than the state of Rhode Island.

“Severe” and “very high” fire danger alerts have also been issued for parts of New South Wales in eastern Australia.

Places as far as New Zealand have also been impacted places by the wildfires, according to Australia’s Bureau of Meteorology.

Several wildfires are also burning in the state of Victoria.

“It’s not humanly possible to prevent [these fires] or put them out,” Timothy Ingalsbee, executive director of Firefighters United for Safety, Ethics, and Ecology based in Oregon told the media. “We have put so much of our strategy for living in fire environments all on firefighters, all on suppression, reacting to blazes. And, you know, now we are facing conditions, given climate change, in particular, we can’t do that.”