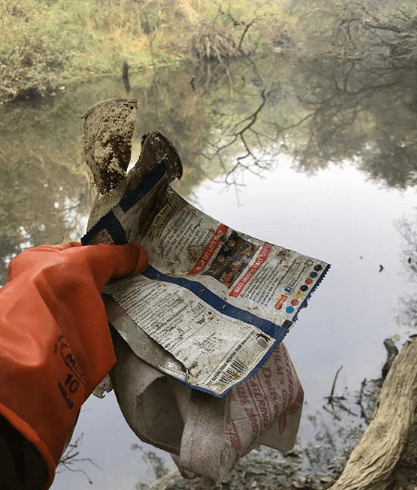 This campaign also takes aim at this logic, “I am powerless, what can I possibly do alone to change the world?”

It’s well known that lack of proper waste management and its disposal is adding to the worsening air quality of Delhi.

But its role in air pollution is often overlooked. On one hand, the decomposition of mixed food waste at landfills generates greenhouse gases and on the other, emissions from waste-to-energy plants release Furans, Dioxins, heavy metals into the atmosphere that further pollute the air and groundwater. Open burning of waste is another big challenge.

In view of these public health issues, Plogga India launched a new campaign called #BurnCaloriesNotWaste. Through this positive intervention, they urge individuals and communities to raise awareness about the hazards of waste burning by linking personal health goals with the need for cleaner public spaces.

How does this work?

Through this year-long campaign, Plogga India is asking people to go plogging to clean up their immediate surroundings while tracking distance covered, calories burnt and the amount of waste picked up in the process to measure the tangible impact of their act of kindness.

Plogging is a combination of jogging with picking up litter. This new environmentally conscious fitness trend started as an organized activity in Sweden around 2016 and spread to other countries in 2018, following increased concern about plastic pollution.

This way, you can aspire to have personal fitness goals and directly intervene to clean up your surroundings.

This campaign also takes aim at this logic, “I am powerless, what can I possibly do alone to change the world?”

The larger goal is to acquaint people with the United Nations Sustainable Development Goals such as SDG 3 (Good health and wellbeing), SDG 6 (Clean water and sanitation), SDG 11 (Sustainable Cities and Communities), SDG 13(Climate Action) and SDG 15 (Life on land) that are linked to the campaign. An impact in one SDG, will have a ripple effect on others!

One of the areas they covered during the campaign is the Sanjay Van. The volunteers collectively did 4 km jogging/brisk walking in total and burnt between 230-260 calories during the session while cleaning the place.

Abhimanyu Chakravorty, Founder of Plogga India said, “The #BurnCaloriesNotWaste campaign is a good way to empower and engage youth to positively intervene and take charge of their fitness as well as public spaces.”

He added, “With plogging being the focus, it opens up a larger conversation on waste burning and its contribution to the air quality in India, especially in Delhi. Why is it that millions of people in Delhi are left asking, “Where’s my right to breathe?” So this campaign is a call-to-action for all those who want to make a difference but didn’t know how to till now.”