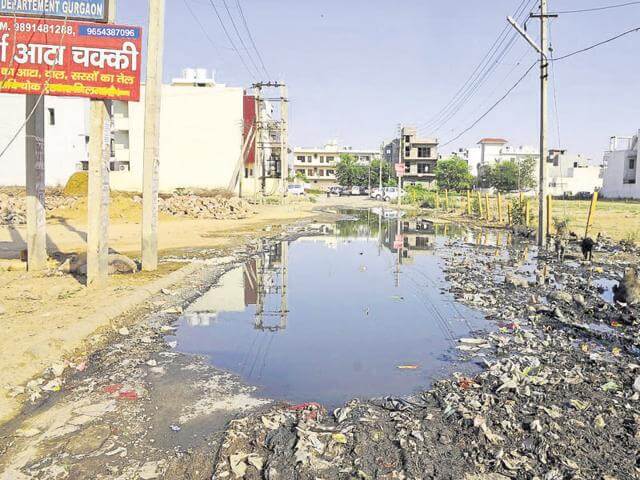 Environment Woes of the ‘Millennium City’
From air to water pollution, Gurugram’s list of environmental crisis is endless.

The largest city in Haryana has witnessed some major environmental calamities since the last few years. From air to water pollution, Gurugram’s list of environmental crisis is endless.

A document jointly prepared by the Centre for Science and Environment (CSE) and Gurgaon First released in 2017 said that the fast depleting groundwater table, high levels of pollution, rising demand for electricity, growing dependence on personal vehicles, poor waste management and enormous pressure on forests are among the issues confronting Gurugram.

Air pollution has been a major cause of concern in Gurugram. In fact, according to a report by IQAir, a global air quality monitoring platform and Greenpeace, released earlier this year, Gurugram has emerged as the most polluted city. The report highlighted that out of 20 most polluted cities in the world, 18 are in India.

Data also revealed that the city had only three days in the whole year of 2018 when the air quality was safe!

Though there have been efforts to curb the pollution problem, there hasn’t been much improvement. At present, Gurugram has only two monitoring stations to check the air quality of the city.

Last month, the Air Quality Index (AQI) docked at 703, which falls in the 'severe plus' category, according to System of Air Quality and Weather Forecasting And Research (SAFAR). People residing in Gurugram constantly complained of breathlessness and allergic reactions due to the toxic air.

Another issue is the Diesel generators

Besides shopping malls, markets and offices, thousands of residential apartments run on diesel generators in Gurugram which contributes to air pollution.

Diesel generators are known to emit large quantities of sulfur oxides and particulate matter, which lead to the formation of secondary aerosols, particularly polycyclic aromatic hydrocarbons (PAH) — a carcinogen formed as a direct consequence of diesel combustion.

A study by Delhi-based Centre for Science and Environment (CSE) in 2018 had said that the use of diesel generator sets increases the level of Particulate Matter 2.5 and PM10 in Gurugram by 30 percent.

“In Gurugram there are several dozens of societies (residential apartments) having no electricity connection. When I say society, it doesn’t mean that 20 or 30 houses. There is no society having less than 200 homes. In these apartments (diesel) generators run round the clock. The pollution caused by it is a great trouble for everyone,” said RTI activist Harinder Dhingra to media.

Though, the use of diesel generators in Gurugram, Faridabad, Noida, Greater Noida, Sonepat, and Panipat was banned from October 15, 2019, along with the deployment of other measures, as per the Graded Response Action Plan (GRAP), not much difference is seen.

Water crisis is real in Gurugram

Gurugram stares at a serious water crisis. With rapidly growing urbanization, there are a host of issues and concerns – per capita supply, quality, duration of supply, water pressure, groundwater levels, water infrastructure and equity of access.

It has also led to pressure on the water-table that some fear ground-water could be totally depleted in the near future.

In July this year, people living in high-rises and gated residential societies in Gurgaon struggled to get basic as a piped water supply for even an hour. Piped water supply reduced every day and residents claim buying water from the tankers is expensive. Also, the water that did come was muddy and added to people's woes.

Last year too, around 10,000 residents of upscale Aardee City residential society in Gurugram faced an acute shortage of water.

The sewage problem in Gurugram has become a source of water pollution and contamination, with serious risks to public health and water bodies.

At least 80 million liters of untreated sewage flows directly into the stormwater drains in Gurugram every day according to a report published earlier this year which pollutes rivers, damages underground water table, poses a huge health hazard for the nearby population and triggers flooding of roads during monsoon.

There are also parts of Gurugram that are not connected to sewer lines; faecal sludge from these areas is usually physically disposed of by dumping on land or into water bodies, causing more contamination.

These are a few of the multiple environment problems Gurugram is facing. It’s high time the authorities take charge and do something about it.