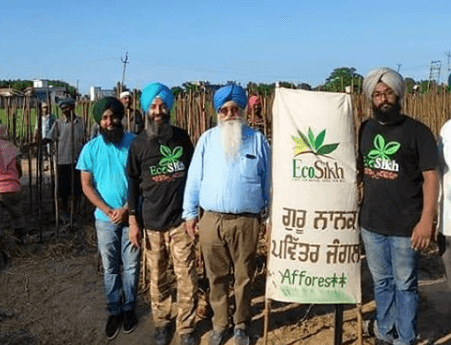 The world is facing a pollution crisis and it’s not a secret. It is affecting the health of our children. The situation is very drastic and will soon get out of the hands if something is not done to reverse it. The planet will continue to be in existence even when it is hotter but life as we know it will not survive at this rate, so it is not that we are trying to save the planet but we should put all our might to save the life on it.

Safeguarding environment is duty of every Sikh

Most of the people are ignorant of the environmental problems and their roots, until and unless they change their habits into more sustainable lifestyles the efforts of few will go in vain.

EcoSikh, through our teams in various places around the world, is continuously doing plantation activities and awareness campaigns.

It is in the Sikh philosophy and daily prayers that nature itself is an image of the creator, so to respect and safeguard the environment naturally becomes the duty of every practicing Sikh.

The Sacred forest initiative has its roots in the Sikh principles of safeguarding the environment and it is a religious duty all the while being equally important to sensitize the masses about the menace of global warming and climate change.

The sacred forests are the most effective means to combat air pollution, soil degradation, loss of biodiversity, declining water table and mass deforestation while involving the masses on ground level.

In September 2018, EcoSikh had launched Guru Nanak 550 Campaign with a global target of planting 1 million trees by planting 550 trees at 1820 spots globally to celebrate 550th Gurpurab of Guru Nanak.

Till now, EcoSikh has planted more than 123 beautiful and thriving forests in Punjab and in states outside Punjab. Starting from Gill Patti Bathinda, we have now covered Sangrur, Ludhiana, Moga, Fatehgarh Sahib, Ropar, Jalandhar, Mansa, Gurdaspur, Hoshiarpur, Faridkot, Samana, Kapurthala, Patiala, Mohali in Punjab and amongst the other states, our sacred forests exist in Gujrat, Rajasthan, Haryana, Maharashtra, Jammu & Kashmir and one in Kasur, Pakistan.

The sacred forests are efforts to revive native species of the areas in which they are planted and to conserve endangered flora. Plants in these forests have a very high rate of survival and fast growth rate which provided impetus to combat rapid deforestation.

We have taken an initial target of planting 1820 forests of 550 trees each thus planting and protecting 1 million plants, after this, the sacred forests will be continued to be planted.

There should be a global effort to curb a global problem. Planting a forest is the best investment for our collective future.