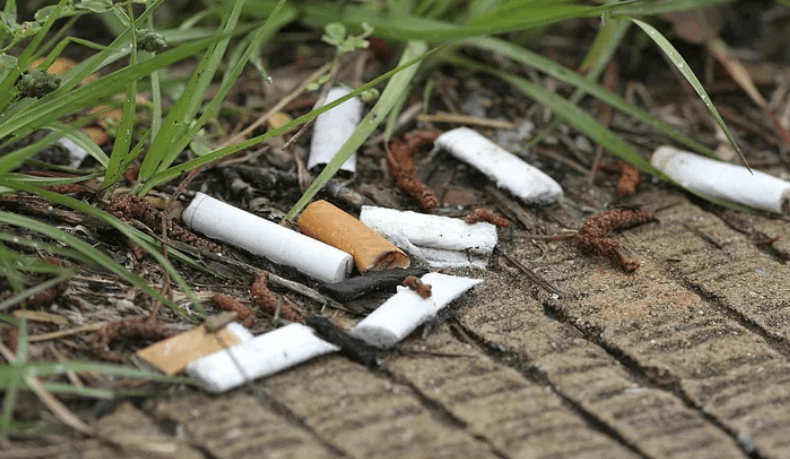 Cigarette Butts Are Toxic Plastic Pollution
2
Worldwide, about 4.5 m cigarettes are littered every year having a big environmental impact.

Cigarette butts seem to be everywhere, scattered along green spaces, sidewalks, beach, waterways, virtually everywhere we go. It may look like cotton but 98% of cigarette filters are made up of plastic fibers (Cellulose Acetate) that are tightly packed together.

So there is no surprise that cigarettes are the most littered item on earth. Worldwide, about 4.5 m cigarettes are littered every year having a big environmental impact. The littered cigarette butts leach toxic chemicals such as arsenic (used to kill rats), nicotine and lead, to name few-into the environment and contaminate water. The toxic exposure can poison fish as well as animals who happen to eat cigarette butts.

Besides being toxic these cigarette butts are non-biodegradable and can take up to 10 years or more to break down depending on environmental conditions like the rain and sun.

A survey report released stated that in Kolkata, a person consumes 9-10 cigarettes in a day making the city the highest cigarette consumption in India.

The consumption frequency is higher in Kolkata than any other metro city, for example, a Mumbaikar consumes 6-7 cigarettes in a day. As per the reports released by “ICICI Lombard Tobacco Consumption Habits’2014” the consumption pattern has seen a 44% increase in cigarette smoking, which has increased in the last 2-3 years, with weekly spending on cigarette being Rs.350.

Smoking isn’t just harmful to health, it’s also damaging the planet- this was the key message of a new report commissioned by “World Health Organization”.

The study stated that tobacco’s annual carbon footprint is 84 million tonnes which is almost as high as the greenhouse gas emissions of Peru or Israel. Besides being toxic in nature its production requires intensive use of natural resources and uses chemicals that pollute the environment and harm human health.

Cigarette Litter: Effect on the environment

Six trillion cigarettes are manufactured every year globally which take up some 4 million hectares of land and require more than 22 billion tonnes of water. The WHO study also calculated the environmental impact of being a smoker at an individual level, with depletion of 1.4 million litres of water as a result of producing enough tobacco to smoke a pack of 20 cigarettes every day for 50 years.

Cigarette pollution in the environment affects the lives of animals, when cigarette butts and packaging end up in the environment, animals are at risk of consuming them. The toxic chemicals then adversely affect the animal’s health.

The chemicals act as poison and could end up killing them. Additionally, these debris cannot be digested by animals hence resulting in choking and sickness. The debris gets trapped in animal’s stomach when such litter is consumed by the latter.

The land is not the only part of the environment which is influenced heavily by the smoking industry. Rivers, waterways, oceans are also affected by the harmful cigarette pollution. When such litter ends up in oceans, waterways the toxic chemicals contaminates the water, which is then harmful to those consuming it.

One study stated that Cigarette butts are one of the largest causes of heavy metal contamination in water. The study further explained that the chemicals from a single cigarette butt releases enough toxin to kill 50% of fish exposed to it for 96 hours.

Cigarette butts look like insects and small fish will consume them because they cannot tell the difference. The butts stay in the animal’s stomach. Limiting their stomach capacity and changing their eating habits.

Besides being toxic and its impact on land, waterways, aquatic life, they also destroy the beauty and greenery of the surrounding.

During a 2018 coastal clean-up by Ocean Conservancy, cigarette butts ranked number 1 on its list of most littered items. More than 2 million pieces were collected in over 100 countries.

Many people are aware that smoking has harmful effects on health, but very few people realize the fact that the small yet ubiquitous cigarette butt is dangerous to the environment. As per a survey done by Waste Wheel, 70% of people are completely unaware that cigarette butt litter is pollution and that it does not degrade easily.

Lack of awareness, that the filters are made up of plastic fibres (Cellulose Acetate) and lack of acceptance that the flick away culture results in litter, is further increasing the problem, the impact of which is beyond cleanliness.

People in Kolkata discard up to two-third of cigarette stick after smoking. A sanitation worker in Kolkata, says he picks up 1000 cigarette filters each day outside subway entrance, chai shops etc. the story is same across the city where people unaware, flick away the cigarette butts on the streets.

“We need strong AWARENESS and ACCEPTANCE.

Every year trillions of cigarettes are manufactured which end up in the streets, waterways, oceans. The number of cigarette filters being accumulated is huge, the impact of which is beyond cleanliness. However, there are solutions that can be adopted to minimize such waste.

Lack of awareness also exists outside India and it’s a global issue. The problem is that people will still smoke and will continue to contribute to the overall 175000 tonnes of butts which will keep adding to the waste problem in the world. But at least the person can mitigate the impact by not exposing others and by being responsible to the discarding.

“Though it’s easy, a society free of cigarette butts may still be difficult to achieve, yet not impossible.”

We provide solid waste management solution to our clients. We are based in Kolkata. Our clients range from residential complex, school, office. We provide custom pickup of waste, segregate and make sure it is being recycled.

Our new project is about understanding cigarette litter and how we can make efforts to minimize the litter also make efforts to segregate, collect and recycle these wastes. We have collaborated with major pubs and cafes across the city where we replace or install our “BUTT BIN” (ash cans) to collect cigarette waste.

We believe in upcycling, hence all our bins are upcycled and designed appropriately to serve the purpose. We have managed to collect approx. 65 kg of waste, and managed to recycle them with our recycling partner.

Our aim is to spread awareness and promote individual actions, and we are trying to do it through our range of sustainable products made of bamboo, wood, upcycled paper, which are perfect substitutes for plastic.

(Nawal is currently nurturing a venture, Waste Wheel- Solid Waste Management Solution Provider based in Kolkata. Post starting his entrepreneurial journey, Nawal has experience working with TATA TRUSTS as a District Consultant, to strengthen the capacity of districts on National Nutrition Mission. He can be contacted on instagram and facebook.)