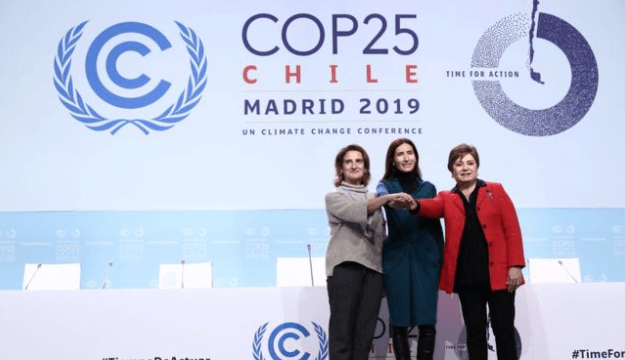 COP25: UN Climate Change Conference To Tackle Climate Emergency
As the global climate emergency grows, over 25000 delegates will gather at the annual two-week climate change conference, known by the abbreviation COP25, which begins today will go on till December 13 in Madrid, Spain. More than 50 high-ranking authorities, including heads of states, are also expected to attend, while grassroots climate activists will join […]

As the global climate emergency grows, over 25000 delegates will gather at the annual two-week climate change conference, known by the abbreviation COP25, which begins today will go on till December 13 in Madrid, Spain.

More than 50 high-ranking authorities, including heads of states, are also expected to attend, while grassroots climate activists will join parallel events, and in some cases, organizing protests elsewhere in Madrid.

The COP25 chair warned at the opening that those refusing to adjust to the planet’s rising temperatures “will be on the wrong side of history.”

“The world’s small window of opportunity to address climate change is closing rapidly. We must urgently deploy all the tools of multilateral cooperation to make COP25 the launchpad for more climate ambition to put the world on a transformational path towards low carbon and resilience,” she said.

A series of shocking reports on climate change!

A series of reports from the Intergovernmental Panel on Climate Change (IPCC) and other agencies have been emphasizing that unless countries scale up their actions significantly, there is little hope of keeping average global temperatures within 2ºC higher than pre-industrial trends.

According to the 2019 WMO Greenhouse Gas Bulletin, levels of heat-trapping greenhouse gases in the atmosphere have reached another new record high. This continuing long-term trend means that future generations will be confronted with increasingly severe impacts of climate change, including rising temperatures, more extreme weather, water stress, sea-level rise and disruption to marine and land ecosystems.

Also, The UN Environment Programme (UNEP) has warned, in its 2019 Emissions Gap Report, that greenhouse gas emissions reductions of 7.6 percent per year from 2020 to 2030 are needed to meet the internationally agreed goal of a 1.5°C increase in temperatures over pre-industrial levels. Scientists agree that’s a tall order, and that the window of opportunity is growing smaller.

Global warming could pass the "point of no return": Antonio Guterres

Speaking before the start of the international climate conference, the United Nations Secretary-General Antonio Guterres said, “The world's efforts to stop climate change have been "utterly inadequate" so far and there is a danger that global warming could pass the "point of no return."

He added that the effect of rising temperatures - including more extreme weather - is already being felt around the world with dramatic consequences for humans and other species.

Guterres cited mounting scientific evidence for the impact that man-made emissions of greenhouse gases are already having on the planet, including record temperatures and melting polar ice.

"Our war against nature must stop and we know that is possible," he said.

What will be decided this year?

The main subject up for discussion at the conference is a provision in the Paris agreement known as article 6, which allows for the use of a global market in carbon to help countries cut emissions and to fund measures that reduce emissions in developing countries.

That involves creating a functioning international emissions-trading system and compensating poor countries for losses they suffer from rising sea levels and other consequences of climate change.

The main topics will be focused on the Oceans and Antarctica, discussed this year at the IPCC meeting in Monaco.