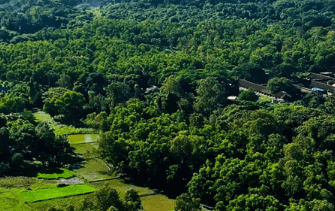 CM Uddhav Thackeray clarified that the stay was on the Aarey car shed and not on the metro project, adding that the overnight cutting of trees in Aarey was not acceptable.

A day after taking charge as Maharashtra Chief Minister, Uddhav Thackeray announced that he has ordered a stay on the car shed project for the Mumbai Metro in Aarey Colony.

He went on to clarify that the stay was on the Aarey car shed and not on the metro project, adding that the overnight cutting of trees in Aarey was not acceptable.

“I have ordered to stop the work of Aarey metro car shed project today. Metro work will not stop but till next decision, not a single leaf of Aarey will be cut,” Thackeray said.

On 29 August, the BMC’s Tree Authority had granted permission to cut down more than 2,000 trees in the Aarey colony.

It resulted in widespread protests and petitions challenging the felling of trees by the citizens.

Several activists in Mumbai were also detained after they attempted to stop authorities from cutting trees and many were arrested.

Section 144 of the Code of Criminal Procedure, which bans the assembly of four or more four or more people, was also imposed in Aarey Colony and surrounding areas.

People of Mumbai happy with this decision: Aaditya Thackeray

Aaditya Thackeray, MLA from the Worli constituency who previously stood against the decision of tree felling in Aarey Colony said that all the people of Mumbai are happy with this decision. Development works will continue but the harm that was being done to the environment will be stopped.

He was also a part of the city session hosted by Let Me Breathe with Twitter India in May this year where spoke about the importance of Aarey that is the ‘only’ major green cover in Mumbai.

Vinita Singh, Member of Aravali Bachao Campaign said, “This is a day of celebration for all battle-weary citizens who are striving to hold on to our green spaces. This action may be too late to save the trees we have lost but it is an early sign that victory for this cause will come. It needs a combination of concerned citizens, belief in our constitutional rights, the wise use of the legal framework, outreach to sympathizers in the administration. And emotional outreach to all people.”

She added, “this is an ecstatic moment for active citizenship. And I am so so proud of the people of Mumbai. They have shown the way to other citizen movements all over the country and world!”

“Till next decision anyways nothing was being cut. But as long as no more concretization is happening, we are happy. I see exciting times ahead for the environmental movements in Mumbai and Maharashtra. Hope the greater good of the future of our cities and villages prevails.” said Yash Marwah, a member of Let India Breathe.

A citizen activist, Sonali Mishra said, “It’s a welcome move. Finally, someone has understood the importance of Aarey and it’s biodiversity and what calamities will befall Mumbai if Aarey is slowly destroyed. Shiv Sena had voiced support for Aarey before the elections and are now walking the talk. It’s so heartwarming to see. I wish the coalition a very fruitful and positive term.”