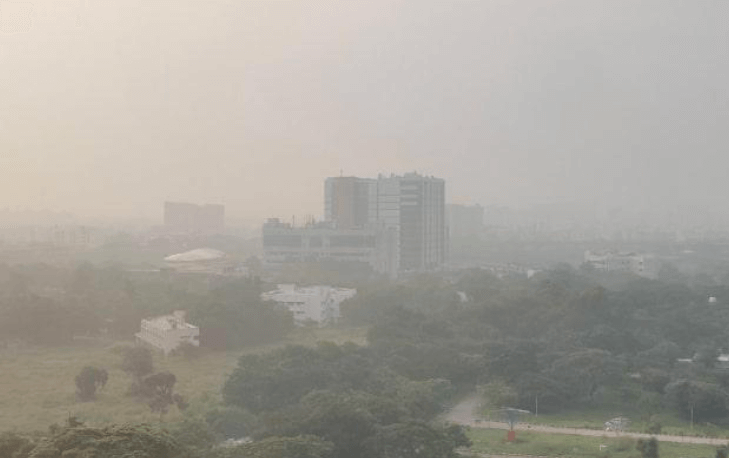 Chennai Demands its Inclusion In NCAP
Fridays For Future, Chennai has organized a protest on the 29 of November in Chennai asserting the city's inclusion in NCAP

Chennai has been excluded from the National Clean Air Programme, in spite of its drastically compromised air quality.

The NCAP has identified 122 cities in India with the aim of reducing their air pollution levels by 20 - 30 % by 2024. Various cities with pollution levels considerably above safe, including Chennai, have been left out of it.

This is apart from the fact that the NCAP has been critiqued for lack of ambition to set strong reduction targets and for lacking a strong financial and statutory framework.

Chennai city ranks second in the country, in terms of emissions and energy consumption for the urban commute. According to a recent study by Health Energy Initiative and Doctors for Clean Air, Tamil Nadu, the levels of PM 2.5 in many places in the city are almost three times the national standard of 60 ug/m3.

Localities in North Chennai, where a number of Coal power plants are located, have recorded severely hazardous levels of pollution and airborne toxic heavy metals. However, the city intends to grow from 3300 Gigawatts of Coal power to 6300 Gigawatts by 2022.

Health studies have shown a significant association between exposure to fine particles and premature mortality. Other significant effects include aggravation of the respiratory and cardiovascular disease, lung disease, decreased lung function, asthma attacks, and heart attacks.

Chennai is also unlike any other city in India, as it is the only city with three mega seaports within the metropolitan area and associated movement of heavy diesel vehicles, associated vehicular traffic, and two massive smoldering garbage dumps.

Keeping in mind all these points, Fridays For Future, Chennai has organized a protest on the 29th of November, Sunday at Elliot’s Promenade, Besant Nagar, Chennai between 6 to 8 am, asserting the following demands -

1. Include Chennai in the NCAP.

2. Move away from Coal-fired energy generation and implement renewable energy alternatives in its place.

3. Increase the number of air pollution monitors in the city, and recalibrate the old ones.

4. Reallocate budget for public transport with the aim of bringing down air pollution levels in the city.

As a follow up to the protest, Fridays For Future Chennai will also be circulating an online petition mentioning these same demands.

They also plan to spread awareness amongst people about how to use apps like Solve ninja and Sameer to report air pollution in their localities to the authorities. During the protest, a demonstration on how to use a DIY air quality monitor will also be explained.

I hope this protest serves as a wake-up call for all the other cities across India which have been left out of the NCAP and that they will demand action.

(Yuvan is a naturalist, writer, activist, and teacher based in Chennai.)