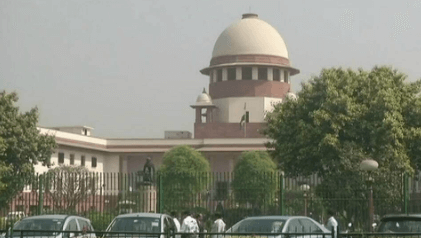 The Supreme Court of India slammed the PM Modi-led central government and the states including Punjab and Haryana for "blame game" over the issue of air pollution.

It pulled up the Punjab and Haryana government for an increase in the instances of stubble burning despite its order prohibiting it.

Delhi has been choking with hazardous levels of pollution since late October, with the air quality dipping to "severe" category a few times. More than five lakh liters of water was even sprinkled at 13 pollution hotspots over the past two days to hold down dust, a Delhi Fire Services (DFS) official said.

"Why are people being forced to live in gas chambers? It is better to kill them all in one go, get explosives in 15 bags at one go. Why should people suffer all this? In Delhi the blame game is going on, I am literally shocked.” said Justice Arun Mishra during the hearing.

It has also asked the Central Pollution Control Board (CPCB) to file a report on the adverse impact on the environment of the factories running in Delhi and details on the nature of factories operating.

Supreme Court questioned Punjab Chief Secretary on what steps have been taken to prevent stubble burning. "How can you treat people like this & let them die. Tell us why stubble burning increased after our order. Why are you not able to check stubble burning. Is it not a failure?" SC said.

Justice Arun Mishra mentioned that people from other countries are making fun of our incapability to control pollution. The top court said, “Chief Secretary (Punjab) we’ll hold every machinery in the state responsible. You can’t let people die like this. Delhi is near suffocating. Because you aren't able to implement measures, it doesn't mean people in Delhi-NCR should die and suffer from Cancer.”

Justice Arun Mishra said that Delhi is worse than hell. “Life is not so cheap in India and you will have to pay”. Pointing towards Delhi Government, he said, “You have no right to be in chair. How many lakhs each person should be paid? How much do you value a person's life?”

The top court directed Centre and Delhi government "to keep their differences aside" and sit together and finalize plan within 10 days to set up air-purifying towers in different parts of the city.