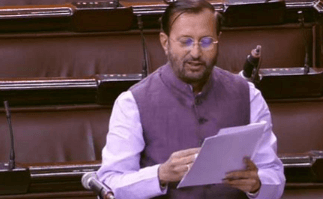 Prakash Javadekar Calls For ‘Jan Andolan’ at National Level
1
The Winter Session of Parliament, which started on November 18, finally took up the issue of air pollution and climate emergency in its sittings.  Air pollution has continued to haunt the people of Delhi-NCR for a long time. The air quality in Delhi even today (November 22) was in the ‘very poor’ category with an […]

The Winter Session of Parliament, which started on November 18, finally took up the issue of air pollution and climate emergency in its sittings.

Air pollution has continued to haunt the people of Delhi-NCR for a long time. The air quality in Delhi even today (November 22) was in the 'very poor' category with an overall air quality index (AQI) of 364 at 9.30 am.

During the Parliament session on November 21, Environment Minister Prakash Javadekar proposed the creation of urban forests, which will serve as the lungs of the cities. He pointed out that pollution in the Indo-Gangetic plain is higher than in other places and went on to explain that it is because there are more moisture and dust in these regions.

He proposed a Jan Andolan or large scale movement where individuals take the initiative to plant trees and students are encouraged in schools to plant saplings and take the responsibility to ensure that their plants grow into trees.

Javadekar added that the Jan Andolan should also include the pollution caused by traffic, both noise and air. He said that individuals have to fight the menace together by taking some basic steps such as using environment-friendly fuel and avoiding honking unnecessarily as part of conscious effort.

Aditya Dubey, a youth environmentalist thinks that this is an excellent idea. “Plantation of trees is the best and most economical way to deal with air pollution of Delhi.  But, the plantation has to be dispersed in which students and citizens plant one or two trees near their residence and then take care of it. Should not be a sham plantation where ten lakh trees are planted at one place and pictures are taken and then no one cares for the trees and they die.” he said.

“The best way forward is to provide two saplings to each student in Delhi- private and government schools and ask them to plant and take care of it. There are around 2 million students in Delhi alone so we are talking about 4 million trees being planted by this mode.” Aditya added.

Aditya is also the founder of ‘Each One Plant One’ campaign wherein 1.5 lakh seed orbs were distributed that worked very well. He said, “In fact, when Mr. Javedkar was the HRD Minister, I had written to him to make planting of one tree by each student of Delhi a part of the curriculum. He had responded positively and forwarded it to the ministry for action but then the proposal got stuck in red tape. But better late than never. If this proposal is implemented it will really help in improving the air quality of Delhi.”

He also thinks that the implementation of this scheme should be monitored by a committee of environmentalists as only that can ensure proper execution of it.

Union Environment Minister Prakash Javadekar also tabled a report during the same Parliament session that said that the national capital's air quality has improved in the last three years and the number of 'good' and 'moderate' days has increased.

The report added that there has been an overall improvement in the air quality of Delhi in 2019 (from January-November 19) successively from 2016.

He further added, “We have allocated a total of Rs 280 crore for awareness programs. We are now migrating to BS6 which will reduce vehicular pollution by 80%.” Regrading stubble burning, he said, “UP has recorded 25% reduction, Haryana 20%, and Punjab 16%. We are now progressing.”

“Three waste to electricity plan are producing electricity, SOP for construction & demolition are already in place. We are monitoring pollution level at 793 locations in 43 cities, while research projects are underway in collaboration with CPCB and different IIT,” Prakash Javadekar said.