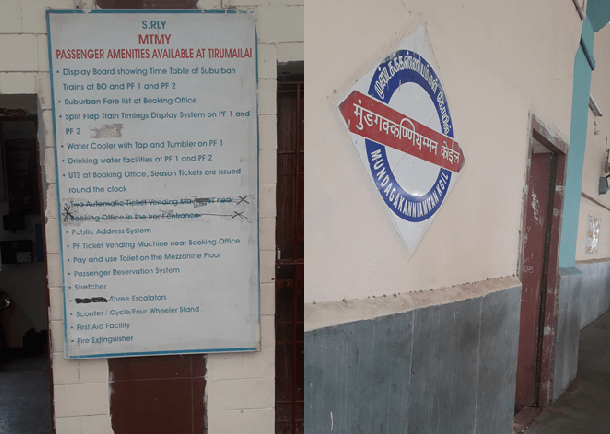 Chennai MRTS stations: Commuters Indifferent To Lack of Facilities and Unhygienic Conditions
Daily commuters have become apathetic to the hygiene and lack of facilities at MRTS stations. Some stations towards Chennai beach lack basic facilities.

Particular stations like, Thirumayilai, Mundakanni Amman Koil, Light House, Thiruvallikeni and Park Town raise these complaints. The sanitation of these stations is at the hands of the local female staff, cleaning the stations in the afternoon.

The Station Master at Thirumayilai vouched for the cleaning staff, saying they “do their job well”. However, the walls and windows of most of the stations remain unattended, marred with paan spittle, dirt, and cobwebs.

Accounts from women on toilets, particularly at Mundakanni Amman Koil deem them unsafe. B Priya, a student who boards the train from that station on a daily basis has never used the toilets present at the stations. She was skeptical of the hygiene of the toilets. However, upon survey, a functioning and relatively clean ladies toilet was found at Amman Koil. It was the only open and clean toilet found among all the other stations.

A couple at Lighthouse station mirrored Priya’s claim; they added that the restrooms always reeked.

An official at the Rest House at Thiruvallikeni who did not wish to be named confirmed the poor conditions of the toilets.

Drinking water is scarce at most stations, if available; people are put off by the dirty ceramic washbasins and the unprocessed saltwater.

N Periynayakan, a resident of Mandaveli, complained about the absence of taps at most stations. He quickly added that Thiruvallikeni was far better in terms of cleanliness.

Commuters, the officials and staff at the stations preferred to bring drinking water from outside. In regards to the water problem in most of the stations, the Station Master only said, “this is Chennai’s problem”.