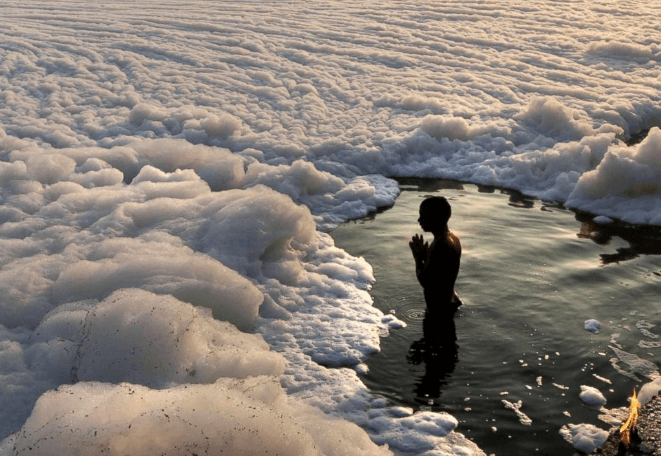 Running through Delhi and Agra, Yamuna Is Foaming Like A Poisoned Man!

When I first saw the Yamuna river with the white foam, I thought it looked pretty, all thanks to my naivete, after all this is the first time for me to witness something like this. I was wondering what this white stuff might be? You already know the answer, Don’t you? It is TOXIC FOAM.  […]

When I first saw the Yamuna river with the white foam, I thought it looked pretty, all thanks to my naivete, after all this is the first time for me to witness something like this. I was wondering what this white stuff might be? You already know the answer, Don’t you? It is TOXIC FOAM.  This foaming is quite similar to the foaming at the mouth of a poisoned person.

The Yamuna has been poisoned for a long time and now it’s dying!

An activist Mr. Brij Khandelwal said the same thing. In March 2017, he called the Agra police and reported a case of attempted murder of river Yamuna!

I would like you to know that Uttarakhand High Court has already declared Yamuna and Ganga as “living entities” in  June 2017 and also said that they should be treated as human beings. Before India, in March 2017, New Zealand has declared its river Whanganui as a “legal person”.

Let’s go through some facts quickly. The Yamuna is the 2nd largest tributary of Ganga and the longest tributary in India. As it is such a large river, it passes through 3 states which are Uttarakhand, Haryana, Uttar Pradesh, and our capital Delhi. Nearly 60 million people depend on its water and the third quarter of Delhi’s water supply comes from the Yamuna.  Now you know, how many lives are at risk. The number is twice the population of Nepal.

Before the river enters Delhi, it is the home to turtles, different species of fish, crocodiles and an abundance of aquatic plants and phytoplankton. But, it begins to die as it enters Delhi, due to all the industrial waste and untreated sewage released in it. Noted ecologist C.R. Babu, who is helping the Delhi government in developing a Yamuna riverfront, said that the river is in fact “ecologically dead” in the 22 km urban stretch.

High amounts of chromium, mercury and arsenic, and other heavy metals have been detected in Yamuna water, along with chemical pesticides, fertilizers and untreated sewage and industrial waste. No need to say how beneficial this river water is, especially for your long life. You can get all the expensive diseases, like cancer, free of cost. Don’t we all like free stuff?

The local administration of Agra claims more than 40 drains have been tapped. Municipal environment official Rajiv Rathi says waste liquid was now being treated at half a dozen STPPs in Agra, before being discharged in to the river.

Was Yamuna Action Plan a success?

You should also know about government plans, to control pollution levels in the Yamuna. It is called the Yamuna Action Plan (YAP). The phase I of YAP started in 1993, this was a collaboration project between Indian and Japanese government. It included two types of activities, first, setting up sewage treatment plants (STPs) and the second activity was the construction of toilets, riverfront, plantation and spreading awareness among people. Phase I ended in 2003.

Afterward, the Indian Government started phase II in 2003. Currently, the third phase of YAP is still going on.  The first two phases have not been a 100 percent success because the capacity of STPs that were constructed, was not enough to deal with the sewage of the growing cities. In short, we didn’t have enough STPs. That’s why the government is still working on building more STPs in the third phase.

Since YAP deals with sewage, what about industrial waste? shouldn’t there be stricter regulations for industries?

For thousands of years, we have been worshipping this river, and still, look, what have we done. We certainly have a nice way to show our devotion. It might be possible our devotion is only for show or we are just too ignorant.

In the 16th century, Babur, the first Mughal emperor has described the water of Yamuna as “sweeter than nectar”.  There are records that show that the Yamuna has been quite clean and rich with marine life until the 1960s.

I can’t help but deeply sympathize with these people who don’t have a choice but live in such conditions.

Nature doesn’t know any boundaries, and everything is interdependent. If not directly than in an indirect way this will surely affect us. Since we are responsible for this problem, only we can solve this.

I am an optimistic person, therefore, all I want to say is “It’s never too late”.

(Esha is pursuing MSc in  AI & Ml and an active member of Climate Change India(CCI). Having a background in biology and being passionate about the environment has driven her to the cause of nature conservation. She wishes to work towards the goal of informed activism for the protection of this beautiful planet we live in and its flora and fauna. Her Instagram: Climate Change India)