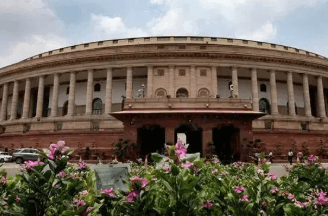 At a time when Delhi battles severe air pollution, a discussion on air pollution and climate change will take place in the winter session of the Parliament today.

Congress MP Manish Tewari and BJD lawmaker Pinaki Misra are expected to initiate the discussion in the Lower House of the Parliament at around 2 pm which will conclude with a reply from Environment Minister Prakash Javadekar.

The discussion assumes significance as Delhi and its neighboring cities have been battling severe pollution levels in the recent weeks mainly due to stubble burning by farmers in Haryana and Punjab. Air quality in the national capital deteriorates every winter owing to the incidents of farm fires in the two states.

Here are the live updates:

Lok Sabha proceedings have been adjourned till Wednesday, reports ANI.

Gautam Gambhir, the MP from East Delhi said, "The topic of discussion is something that affects everyone irrespective of our caste, creed, age, and religion. It's affecting us while we stand and talk about it in Parliament. It's high time we stop politicising this issue."

AIADMK MP P Raveendranath Kumar said, "Steps should be taken to increase the number of electric vehicles across the country. There is a need to take initiatives at the grassroots levels."

Matter of shame that only 4 MPs attended committee meet on pollution: Danish Ali

BSP MP Danish Ali said, "Last week, the capital was the world's most polluted city, and it is in this city that our Parliament is located."

He further said, "It is a matter of shame that only 4 MPs attended a committee meeting on pollution."

Why can't we have a 'Swachh Hawa mission?': Kakoli Ghosh Dastidar

Kakoli Ghosh Dastidar said," Because of NOx, SOx, CO, PM2.5, people are silently dying. Instead of politicizing this issue, shouldn't we for once, this about this issue as humans? Shouldn’t we be thinking about the climate first?

Out of the 10 most polluted cities in the world, 9 are in India: TMC's Kakoli Ghosh Dastidar

TMC MP Kakoli Ghosh Dastidar said in the Lok Sabha, "Out of the 10 most polluted cities in the world, 9 are in India. It is quite unnerving that a foreign Premier of a country who was on a visit to India made an adverse comment. I would like to draw the government's attention towards it."

Parvesh Sahib Singh Verma further said, "The previous government and the present government have spent Rs 32,000 towards reducing pollution in the Yamuna river. Yet, untreated water from industries continues to flow into the river. It is not possible to live near the river or even stand near the river for a long period of time. This is a very unfortunate state of affairs."

How does Delhi breathe polluted around the year?: Parvesh Sahib Singh Verma

Parvesh Sahib Singh Verma, MP of West Delhi said, "200/365 days air is polluted, stubble is burnt only during winter, then, how does Delhi breathe polluted round the year? You want to put all the blame on neighboring states? Why aren't you talking about the vehicles which are polluting the air around the year? The Delhi government is trying to create a rift between urban and rural people. This is not correct."

BJD MP Pinaki Mishra said, "On the evening of Diwali and the morning, pollution levels had spiked in Delhi. Stubble burning had already been going on for several days. So, although stubble burning is a contributing factor, it is not the only factor."

Why no voice is raised from the government on air pollution: Manish Tewari

"When the pollution issue occurs every year in Delhi, why is it that no voice is raised from the government and this House over this? Why do people need to knock the doors of the Supreme Court every year over this issue? It is a matter of grave concern." said Manish Tewari

He further said, "Just like there are standing committees such as Committee on Public Undertakings and Estimates Committee, there should be a committee to look into pollution and climate change."

Manish Tewari cited the example of Beijing and said, "Some years ago, Beijing had seen high levels of pollution...However, by the end of 2017, PM2.5 levels in Beijing fell by 35 percent. Most of this happened due to the use of cleaner fuels and industrial restructuring."

Tewari further said, "If the air in Beijing can become clean, do we have a lack of willpower or resource constraints? Why can't pollution in the capital and other major cities be reduced?"

Congress leader Manish Tewari said in the Lok Sabha, "Every year, the air in Delhi gets extremely polluted. In fact, the citizens are presently breathing poisonous toxins instead of air. This issue should be seen outside the prism of party politics.

Lok Sabha adjourned till 3 pm over JNU issue. Discussion on air pollution crisis and climate change to be held at 3 pm.

YSRCP’s Vanga Geethaviswanath urged the government to release the requisite amount for the completion of the Polavaram project in Andhra Pradesh.

BJP MP from Maharashtra’s dindori Bharti Pravin Pawar requested the Centre for aid to grape farmers who suffered losses due to excessive rains.

TMC MP Mala Roy raised the issue of the Centre’s ban on single-use plastic. Calling the ban futile, she said that it comes amid the absence of sustainable alternatives.

Congress’ Preneet Kaur defended the farmers of Punjab, adding that they have been wrongly vilified over the stubble burning matter.

Need to come together to find a solution for air pollution: Kakoli Ghosh

Kakoli Ghosh Dastidar, TMC MP said, ”There is a need to think about the increasing levels of air pollution in the national capital. We need to rise above politics and come together to find a solution. We need to find a way to fight climate change.”