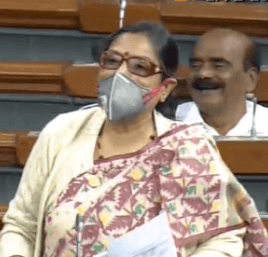 The second day of the Winter Session of the Parliament began with a round of blame game and concerns over air pollution in Delhi-NCR and climate emergency.

While the Congress Party slammed the central government over the air pollution issue, BJP criticised the Aam Aadmi Party for its failure to curb air pollution in New Delhi.

TMC MP Kakoli Ghosh Dastidar, who wore a mask ahead of joining the Lok Sabha proceedings to highlight the air pollution issue said, “There is a need to think about the increasing levels of air pollution in the national capital. We need to rise above politics and come together to find a solution. We need to find a way to fight climate change.”

Congress pitches for a committee for pollution, climate change

Congress leader Manish Tewari highlighted his concern over the rising levels of air pollution in Delhi and said that the citizens are presently breathing poisonous toxins instead of air.

"Every year, the air in Delhi gets extremely polluted. This issue should be seen outside the prism of party politics," he added.

He went on to say that just like there are "standing committees such as the Committee on Public Undertakings and Estimates Committee, there should be a committee to look into pollution and climate change."

BJD MP Pinaki Mishra also spoke about how on the evening of Diwali and the next morning, pollution levels had spiked in Delhi. “Stubble burning had already been going on for several days. So, although stubble burning is a contributing factor, it is not the only factor," she added.

Meanwhile, targeting the Delhi Government, BJP's Parvesh Sahib Singh Verma, MP of West Delhi, said that the Delhi government is trying to create a rift between urban and rural people which is not correct.

He also said that though a lot of money has been spent on reducing the pollution in the Yamuna river by the previous and the present government, its condition is still the same due to untreated water from industries that continue to flow into the river. It is not possible to live near the river or even stand near the river for a long period of time.

Delhi BJP MP Manoj Tiwari also laid the blame for pollution at the door of the Delhi government. He said, "The Delhi government should have provided funds for sprinklers which can help in combating pollution. However, it did not do so. Eventually, the funds came from the Narendra Modi-led Central government."

Meanwhile, AAP also took a jibe at the BJP and said, "When a discussion was going on about a serious issue like pollution, BJP MPs were missing. But the MPs were certainly present in a meeting which was aimed at spreading lies about water."

Gautam Gambhir, the MP from East Delhi who was criticised for skipping a key meet on pollution, also spoke in the Lok Sabha. He said, "The topic of discussion is something that affects everyone irrespective of our caste, creed, age & religion. It's affecting us while we stand and talk about it in Parliament. It's high time we stop politicising this issue."

After days of 'severe' and 'very poor' air quality, Delhi and its nearby areas witnessed a change with AQI improving to the 'poor' category on Tuesday.

According to SAFAR, this relief from toxic air is temporary as the wind speed is going to slow down from November 20. Due to this, the air quality is likely to plunge into the 'severe' category on Thursday (November 21).