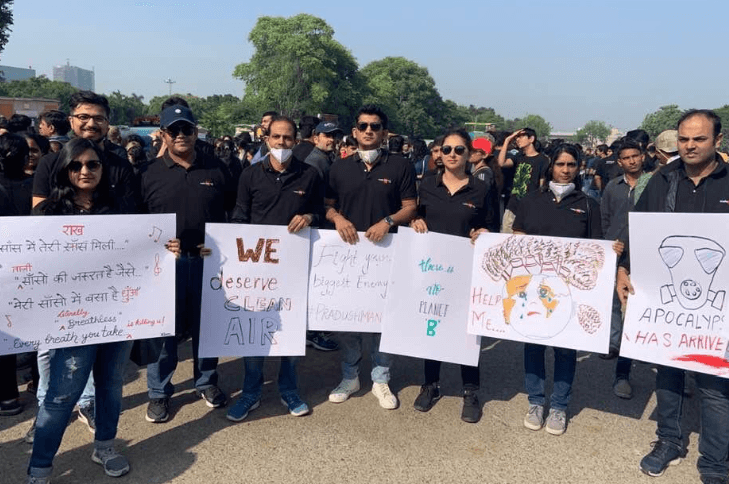 Citizens and Corporates Come Together Demanding Clean Air
Consistently poor air quality of Delhi-NCR made the citizens and some of the biggest corporate houses of Gurugram to get out on the streets demanding their right to breathe. The fear that professionals working in Gurugram could relocate to places with cleaner air is becoming bigger with each passing day.  To protest against the worsening […]

Consistently poor air quality of Delhi-NCR made the citizens and some of the biggest corporate houses of Gurugram to get out on the streets demanding their right to breathe. The fear that professionals working in Gurugram could relocate to places with cleaner air is becoming bigger with each passing day.

To protest against the worsening air quality, over 3000 people corporates represented by employees and senior leadership as well and Gurugram residents assembled at Leisure Valley Park in Gurugram on November 17.

The protest, one of the biggest the city has ever seen, saw representation by several private and government schools, corporate houses, non-government organizations, and hospitals.

Deep Kalra, Founder and Group CEO, MakeMyTrip said, “The talent retention problem on account of pollution in cities like Gurgaon is as real as it gets. Multiple surveys done by various organizations including ours paint a grim picture with a very significant number of employees looking to relocate to other cities to avoid the toxic mess that one has to live through year after year in the Delhi-NCR region. Pollution as the reason to relocate ranks way higher than the cost of living, safety or commute for corporate employees working out of this region. Clearly, pollution of this nature is too high an opportunity cost for talent.”

“While retaining talent is one aspect, such visible pollution can also hamper business continuity as the administration may need to take emergency steps like stopping constructions altogether, discontinuing movement of Freight and Odd-Even like schemes which has a definite impact on business. So clearly the impact of pollution of this mammoth scale is non-linear and will definitely have a bearing on productivity as well as economy.” he added.

The air quality has been mostly in the “severe” category in Gurugram since the past week with an advisory issued to the people a few days ago, suggesting that they complete outdoor work between 11 am and 3 pm. Schools were also shut twice by the government due to extremely bad air quality.

Latika Thukral, Co-Founder of I am Gurgaon said, “ the protest was attended by everyone, be it corporates, schools, colleges or doctors living in Gurgaon. People are fed up of this pollution issue. We need some action and we want the Government to look at this seriously. ”

She added, "The Government needs to put together a plan on how to control the burning of garbage, how to plant more trees, how are we looking to prevent the dust, plans for public transport and mobility in the city. We need a full-fledged plan to lead a better life. We can’t live like this anymore.”

Manas Fuloria, CEO, Nagarro said, "Air pollution is having a severe impact on our industry. The government has been active but the political will for hard decisions is lacking. As citizens, we need to demonstrate our concern and also that we are open to change ourselves. We need to adopt waste segregation, sustainable transport and prioritizing greenery over mindless development. Otherwise, we will remain stuck with this deadly air."