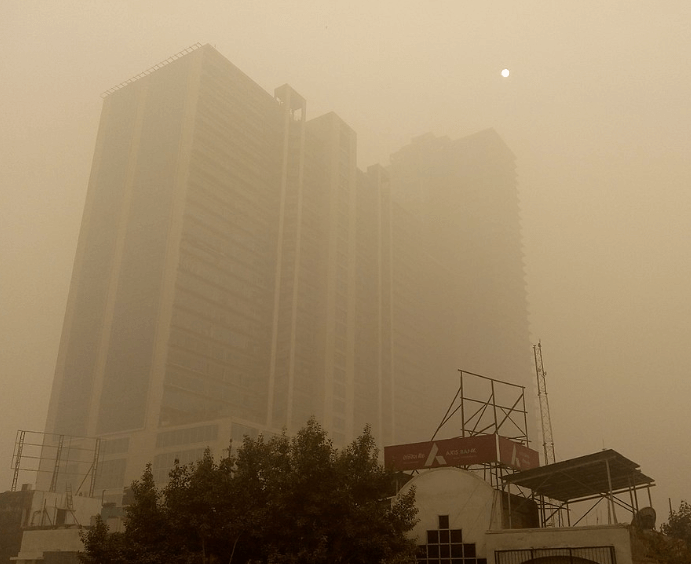 “We are in danger of destroying ourselves by our greed and stupidity. We cannot remain to look inwards at ourselves on a small and increasingly polluted and overcrowded planet” Stephen Hawking. These words of Stephen hawking sound so relatable to the current situation of Delhi-NCR. The rising levels of air pollution and the constantly deteriorating […]

“We are in danger of destroying ourselves by our greed and stupidity. We cannot remain to look inwards at ourselves on a small and increasingly polluted and overcrowded planet” Stephen Hawking.

These words of Stephen hawking sound so relatable to the current situation of Delhi-NCR. The rising levels of air pollution and the constantly deteriorating AQI have resulted in a situation of public health emergency in Delhi-NCR. This was spurned by an increase in the particulate matter (PM) concentration.

Hours after the crackers bursting, the pollution levels reached all time high with toxic air pollutants released in the air deteriorating the AQI. On Diwali night, many areas recorded an AQI of 999 and beyond this, reading is not possible. While in some areas it was worse.

The major contributors to the air pollution in Delhi-NCR

As per the data in the research paper published by the Indian Ministry of Earth’s science on October 2018. The distribution of factors contributing to air pollution is as follows:

The transport and the industrial sector remain the major source of PM 2.5 emissions.

Vehicular emissions rose by 40% in 8 years from 2010-2018 in NCR according to the emissions inventory prepared by the Indian institute of Tropical Meteorology (IITM), Pune, under the Indian Ministry of Earth sciences.

There has been a four-fold rise in the number of registered private vehicles in Delhi in the last 8 years.

The number of vehicles in the NCR surged up to 10.9 million by March 2018, including 0.7 million two-wheelers, according to the Economic survey 2018-19 report.

Talking about on road vehicles and their emissions, around 1.1 million vehicles enter Delhi every day as recorded at 8 different points.

According to SAFAR, the stubble burning in the neighbouring states of Punjab and Haryana accounted for 44% of pollution in Delhi-NCR on November 1, 2019 with the share of farm fire smoke in particulate matter.

Fumes of smoke clog up the sky as farmers burn straw stubble after harvesting the paddy crop.

The situation worsens due to the low wind speed and temperature as the toxic smoke and pollutants remain in the air for a longer period of time.

Considering the high levels of pollution and the deteriorating AQI, a public health emergency was declared at a first in Delhi-NCR by the Supreme Court-mandated panel. Holidays were declared in schools.

41% of Delhites suffered from metal toxicity according to a survey by Daivam wellness. This exposes them to the risk of organ damage, serious health issues and lung cancer to the extreme. Children are most vulnerable to this as their immune to bear such things is considerably compared to adults. Hospitals in Delhi-NCR were flooded with cases of respiratory illness and breathing issues.

Hon’ble Supreme Court criticized the Delhi government for failing to tackle the problem of pollution.

The chief secretaries of Delhi, Harayana, Punjab and Uttar Pradesh were summoned by the Supreme court over the increasing mess of pollution.

Construction activity was banned till November 5 following the deterioration of AQI in Delhi-NCR. Delhi tops the ranking of the most polluted cities in the world over the record-breaking deterioration of

AQI in the month of November. Some outlets started serving oxygen with high rates as much as RS 299/20 minutes.

I think the state and the central government should set aside their differences and political egos and should collectively work for relieving the Delhi NCR from this horror of air pollution.

Several researchers and agricultural scientists have discovered some economically feasible solutions for stubble burning to get rid of the crop residue. The ECOBOT advanced composter is one of such device at the national center organic farming. This could help the farmers who claim to be helpless over opting for stubble burning as the other mechanisms aren’t economically feasible for them.

The firecrackers releasing toxic gases post their bursting should completely be banned, the green crackers should rather be used. The respective governments should ensure complete implementation of Supreme court orders and guidelines regarding air pollution, stubble burning and crackers bursting.

Public transport should be boosted with more buses running on green fuels or solar energy. Afforestation should be conducted on mass as more trees would help relieve from increasing pollution levels.

Foreign organizations and institutions which hold expertise in solutions and mechanisms to combat air pollution should be consulted and enrolled to bring down pollution levels in Delhi-NCR.

(Tanmay Shinde Age-23 is a student of St. Xavier’s college Mumbai. He is passionate about the environment and wildlife. He is also a part of #SaveAareyforest movement and supports a more few initiatives for the environment)