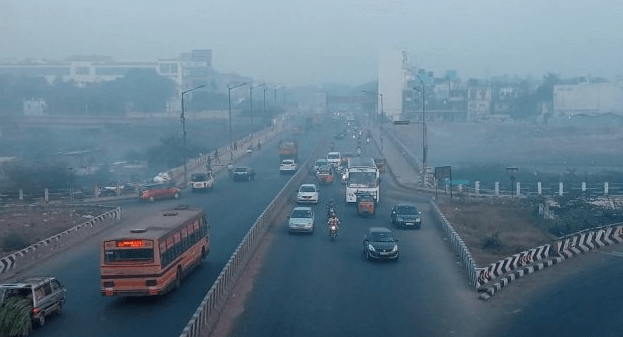 Chennai Deteriorating Air Pollution: A Medical Student’s Perspective
Chennai Detiorating Air Pollution: A Medical Student’s Perspective A week ago, I went to my hostel terrace expecting the engrossing regular view of the harbor, but something was fishy about the night sky. It was not pellucid as it’s wonted. The harbor was barely visible and the light was reflecting everywhere through the particles in […]

A week ago, I went to my hostel terrace expecting the engrossing regular view of the harbor, but something was fishy about the night sky. It was not pellucid as it's wonted. The harbor was barely visible and the light was reflecting everywhere through the particles in the air polluting the dark sky. It was unusually smoggy everywhere.

Then, I got the reminiscence of a glimpse of the Instagram story I took earlier that day about the unexpected hike in Air Quality Index in Chennai and further by surfing the web I found out three on four stations in Chennai recorded AQI between 214 and 314 which represents very poor and unhealthy air quality that day.

Why air pollution is rising in Chennai?

Later, when I researched about the sudden spike in the worsened air quality of Chennai, I got to know that the North Westerly Monsoon Winds and a cyclonic depression in the Bay of Bengal didn't bring rain but instead brought the polluted air all the way from Delhi to the South of India.

As we know, that Chennai's air quality remains comparatively good all throughout the year, this explains why and let us wonder and plan to act accordingly. It's not about who caused the majority of the pollution but it's about everyone to realize and do their part to the environment to keep the air quality in control because this is the only thing that matters.

The next day I put up an Instagram story asking Chennai people whether they'd notice the spike in the smog in their surroundings, for which nearly 75% of all answered yes but barely anyone knew the reason.

Last week was so bad, even the day sky was smoggy, I was able to clearly distinguish that in Chennai Central traffic and around my college campus (Stanley Medical College) in North Chennai.

As a passionate medical student, I got this idea to approach my senior doctors to know more about the worsened air quality and its effects on humans.

He added that AQI between 50 and 100 put the sensitive group in the risk of aggravating illness, above 100 everyone starts experiencing mild symptoms and above 150, it puts everyone at risk.

They said "We noticed an increased number of patients with aggravated COPD symptoms compared to the count of the near past. Usually, we give COPD patients drugs to breathe freely for two weeks, but in the past week we saw patients coming in within a week with aggravated COPD symptoms asking for more effective drugs.” From this, we get a clear conclusion of what a sudden hike in AQI can do to the people of Chennai.

As medical personnel, we advise all to take good care of their health at the same to use resources, vehicles, etc sustainably to make sure at least we have the air quality in control, we breathe air, right?