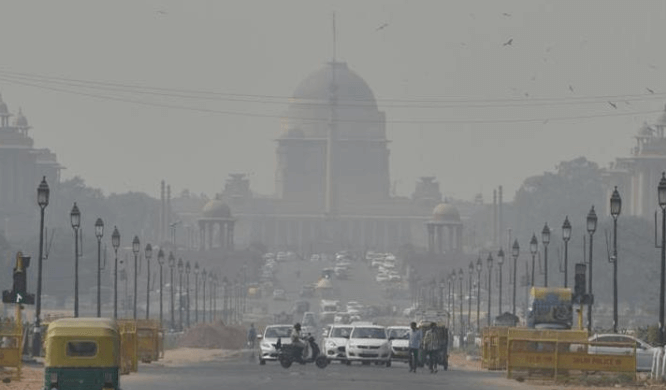 16-Year-Old’s Petition In SC To Save Delhi From ‘Hazardous’ Air Pollution
Aditya Dubey, a 16-year-old environmentalist filed a petition against the rising pollution levels, on behalf of the children of Delhi-NCR

In his petition, he mentions about the unprecedented air pollution emergency that the national capital is facing for the last one week due to the stubble burning being carried out by farmers in the State of Punjab and Haryana.

Schools in Delhi have been advised to remain shut for the next two days due to a rise in pollution levels. The Environment Pollution (Prevention & Control) Authority (EPCA) has also asked industries using coal and other such fuels to remain closed till November 15.

The government's air quality monitor, System of Air Quality and Weather Forecasting and Research (SAFAR), said pollution levels in Delhi-NCR are expected to enter the "severe-plus" or "emergency" category.

Aditya also mentions in the petition that the rise in air pollution levels during the months of October and November is an annual problem for Delhi- NCR as the farmers of Punjab and Haryana burn the stubble to clear their fields for the planting of fresh crop. The stubble burning has been increasing every year and as a consequence, therefore the Air Quality Index level is increasing to new hazardous levels every year.

But, the farmers of Punjab and Haryana are not to be blamed for this problem, as they have to clear their fields and plant a new crop within a very narrow time period. They do not have the machinery to remove the stubble and if they don’t burn the stubble then they cannot plant the new crops, which will rob them of their source of livelihood, he adds in his petition.

But, can this problem be solved?

The petition says that this problem can be resolved only if the Chief Ministers and Governments of the three states of Punjab, Haryana, and Delhi work together and find a solution by providing a cost-effective alternative method or incentives to the farmers to remove the stubble from their fields.

Thus, it is evident that due to the inactions of the Central and State Governments, the Petitioners and millions of other citizens of Delhi are suffering grave medical problems at present and are also being exposed to long terms critical diseases. Thus, ‘the Right to Life of the Petitioner as enshrined in Article 21 of the Constitution of India is being violated by these Governments.’

Finally, the petition says that the Hon’ble Supreme Court should appoint a renowned Environmentalist or a Retired Judge of the Supreme Court to direct, coordinate and control the efforts of the various governments to put off the stubble fires in Punjab and Haryana and bring the hazardous AQI levels of Delhi-NCR region to normal levels, so that the Right to Breathe of the Petitioner and millions of other citizens of Delhi-NCR is protected.

Through this petition, Aditya wants to bring before the Supreme Court the voice of the millions of children of Delhi who are the biggest sufferers and stakeholders in this crisis.

“Our respiratory system is getting irreparably damaged and we want the highest court of the land to intervene and protect our Right To Breathe.  Schools are repeatedly getting closed again, today the schools have again been closed for two days. This will cause serious academic issues for us at the end of the academic year.” he said.

“We also will request the Court to issue special directions with regard to the thousands of street children who are compelled to live on the street and breathe in this poison 24X7 without the protection of masks, purifiers, medical aid or even a home,” he added.