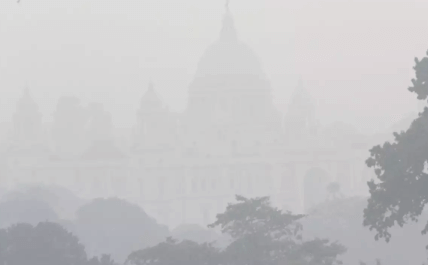 After Delhi-NCR, the air quality in various eastern and southern cities has started to deteriorate.

Officials said that this was primarily because winds were carrying pollutants from the northern plains towards the Bay of Bengal.

North-westerly winds have blown the smoke created because of stubble burning in Punjab and Haryana from the northern plains because of developing cyclonic depression over the Bay of Bengal, as per the Central Pollution Control Board (CPCB).

Experts feel there are not enough continuous ambient air quality monitoring stations in Chennai to make a correct estimation of pollution levels.

The air quality in Kolkata turned 'very poor' on Wednesday night with the pollution levels in the city breaching the 300 mark for the first time in recent months, a West Bengal Pollution Control Board (WBPCB) official said.

The Air Quality Index (AQI) in Kolkata was recorded at 343, which falls in the 'very poor' category, at the green zone Fort William automated air monitoring station at 11 pm, according to the official.

The Ballygunge air monitoring station recorded an AQI of 330 at 11 pm while the AQI at the Anand Bihar station was marginally better at 275, the official said.

Anupama Dokeniya, Communications Specialist from Kolkata said, “We know what needs to be done - banning garbage burning, getting high polluting vehicles off the roads, covering up construction areas. If there is a political will to enforce these actions, then certainly will make a dent in the problem.”

She added that law enforcement needs to take place and bring violators to account.

The city witnessed a drop in air quality levels on Tuesday with the wind direction drawing in pollutants.

Experts had suggested that there would be a spike in particulate matter (PM) this week as the wind moved from the north towards the east coast of the country, then weakening inwards.

The air quality index for Hyderabad, which is an average of major pollutants, was also at 163 on Thursday at 3 pm near Zoo Park while it was 158 in Sanathnagar around the same time, according to data by aqicn.org.

The AQI in Andhra Pradesh’s Visakhapatnam and Vijayawada also rose to 274 and 204. The pollution levels dipped in Bangalore with the AQI being more than 150 in several places.

“Strong inward winds from… [the Bay of Bengal] has pushed the winds carrying the smoke towards south from eastern India.” an India Meteorological Department (IMD) scientist told media.

Pollution increases in Kanpur due to Stubble Burning

Kanpur's air quality index dipped to the poor category due to stubble burning in the nearby areas. According to reports, the plumes present in the air have further deteriorated the pollution in the city.

AQI was in the 'very unhealthy category' in the city today at 6 pm near Nehru Nagar.

The AQI in Punjab’s Ludhiana and Chandigarh were recorded 129 and 141 respectively, today.