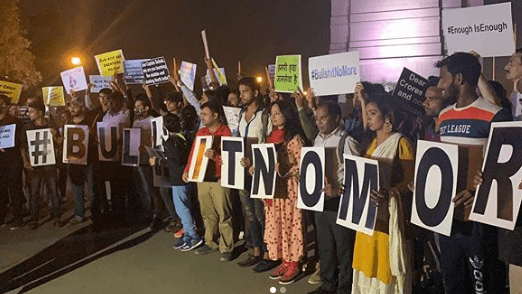 A mass protest was organized by the citizens of Delhi on Tuesday, November 5 at India Gate. #BullshitNoMore #EnoughIsEnough.

1500 people gathered at Amar Jawan Jyoti at India Gate to raise their voice against the severe air pollution and the inaction of authorities and government on the matter saying #EnoughisEngough.

From children to senior citizens, everyone participated in the protest demanding #CleanAir for themselves and their families.

“This is a citizen’s protest. This is to primarily register out anger and opposition to the Government’s apathy. We have been hearing out political parties blame each other for air pollution for several years but at the end of the day, Delhi has become a gas chamber.” Vimlendu Jha, an environmentalist told the gathered media.

Aditya Dubey, a 16-year-old student said, “For me, this protest is a fight for the #RightToBreathe of lakhs of street children who are the biggest sufferers of this hazardous air pollution.”

He added “We want the government to immediately take steps to ameliorate the problems of street children by providing them masks and medical aid and also by arranging air purifiers near slums and areas where these children reside. They need & deserve immediate help and if we the children don’t take a stand for their rights then what kind of humans would we be?”

“What started from an Instagram post, brought thousands on the streets in just 36 hours. I hope the leaders are listening. Citizens are upset and feel neglected. This is only the beginning.” said Tamseel Hussain, Co-founder of Let Me Breathe.

He added that this is not only about Delhi but about every city which is suffering because of lack of clean air.