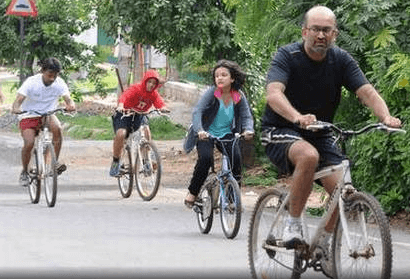 Why We All Need To Start Cycling
By getting separated pathways, more people can cycle and walk, and hence, reduce an immense amount of carbon footprint

Being a 16-year-old girl, I have always dreamed of cycling confidently without the fear of having an accident. Since childhood, my parents have always been reluctant to permit me from walking or cycling around the neighborhood because of the inherent traffic conditions that may lead to severe accidents. There are no separate roads made for pedestrians to walk or cycle and hence I’ve never had the opportunity to express my happiness or vent out my anger by simple yet powerful ways like prancing down the street or cycling through the lanes.

Out of the 20 most polluted and hottest cities of the world, 11 are in India and Delhi is the most polluted capital. By getting separated pathways, more people can cycle and walk, and hence, reduce an immense amount of carbon footprint.

Nowadays, with the development of automation and technology, we are forgetting to take good care of our health by exercising. Cycling is a good way to control or reduce weight, as it raises your metabolic rate, builds muscle and burns body fat. Cycling makes a person feel healthy; physically and emotionally!

Not only cycling but walking too is an important aspect of living besides keeping us fit and reducing pollution, it also enables people to interact socially and feels more at home in their local community. More people walking provides additional opportunities for social interaction on the streets and this enhances a sense of a community.

Hence, through change.org, I submitted a petition demanding separate footpaths for cycling and walking.

Thanks to change.org and all my supporters, I finally got a reply from the Chief Minister of Delhi, Mr. Arvind Kejriwal. He said that the Delhi Government has placed key emphasis on reducing the use of private cars through its Odd-Even scheme and encourage carpooling and the use of alternative modes of transport. Every time the Odd-Even scheme was introduced, Deputy Chief Minister Shri Manish Sisodia has led by example in taking out their bicycles to ride to work in an attempt to encourage more people to follow suit.

He also said and I quote “The Delhi Government considers cycling as one of the important transport options to reduce the severe air pollution in Delhi. We will recommend to the Central government’s Delhi Development Authority to include civic infrastructure for pedestrians and cycles on Delhi’s roads, as part of its Delhi Master Plan. In the meanwhile, I can assure you that all of Delhi’s roads which are being managed by the Public Works Department of the Delhi Government will soon have proper provisions for pedestrian walkways and cycle pathways."

Through his reply, he also promised that in the future, all roads managed by the PWD will be redesigned in accordance with international standards. Streetscaping will ensure clear walking and cycling infrastructure. This will create inclusive spaces for non-motorised vehicles and differently-abled persons.

I always believe that actions are stronger than words. I hope that Mr. Arvind Kejriwal implements these policies to ensure good safety conditions for all the citizens.

(Asees is a 16-year-old girl studying in grade 10. She's a climate striker who’s fighting for her 'Right To Breathe'.)