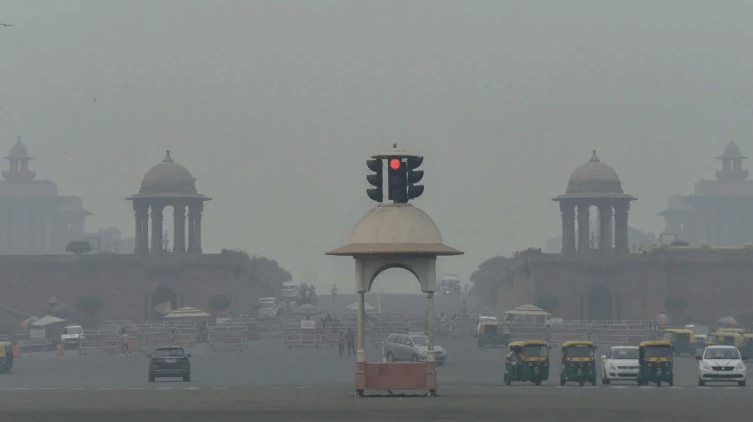 Air Quality Index Marginally Better In Delhi-NCR, PMO Sets Up Panel to Monitor Air Quality
Delhi-NCR has been almost a gas chamber as thick smog enveloped the region. On Monday, however, there was a slight improvement in pollution levels with the Air Quality Index (AQI) dipping from ‘hazardous’ (900+) to ‘unhealthy’ (150-200) which is expected to continue today as well due to an increase in wind speed. According to the […]

Delhi-NCR has been almost a gas chamber as thick smog enveloped the region. On Monday, however, there was a slight improvement in pollution levels with the Air Quality Index (AQI) dipping from 'hazardous' (900+) to 'unhealthy' (150-200) which is expected to continue today as well due to an increase in wind speed.

According to the weather office, there is a possibility of strong winds in the next 24 hours.

The weather office has said that said Cyclone Maha and a western disturbance will cause rain in Rajasthan, Punjab, Haryana, western Uttar Pradesh, and Delhi NCR on Wednesday and Thursday, which might improve the situation, PTI reported.

AAP government re-implemented the Odd-Even scheme in the city from November 4.

According to the Central Pollution Control Board (CPCB) the odd-even scheme, coupled with high wind speed, brought down pollution levels in Delhi by 82 percent in eight hours on Monday, reported India Today.

As many as 260 challans were issued and violators on the first day of the scheme, including BJP leader Vijay Goel who violated the rule by driving an SUV with an odd last digit in its registration number — were fined Rs 4,000.

The Air Quality Index is back to 'very poor' as predicted after rapidly recovering from 'severe', largely due to faster boundary layer wind speed (40 kmph) to flush it out, SAFAR reported.

In spite of the fact that biomass fire counts observed on 4 November were highest of the season (4,962) combined with the north-westerly winds, the Delhi air quality was least affected and continued to recover.

This was mainly due to high transport-level wind speed which rapidly passed over Delhi without descending and then getting dissipated, having a short residence time SAFAR reported.

Authorities in Uttar Pradesh’s Shamli district have imposed a fine of Rs 2,500 each on 29 farmers for allegedly burning crop residue in their fields, officials said on November 5.

Additional District Magistrate Arvind Singh said that the district authorities had cautioned farmers against stubble burning, which is a cause of pollution.

The SC-mandated anti-pollution authority EPCA said dirty fuel-based industries in Delhi and its suburbs will remain shut till the morning of November 8.

The Environment Pollution (Prevention and Control) Authority also extended the ban on hot-mix plants and stone-crushers in Delhi-NCR till November 8.

The bench of NGT chairperson Justice AK Goel, after an in-chamber proceeding, ordered Delhi chief secretary, DPCC chairman, member secretary of CPCB and concerned secretary to MoEF to assemble at 10.30 am.

NGT has also asked the Centre to come up with the best solution to tackle pollution and adopt a holistic approach to deal with the issue.

It said, "Why has the government not been able to work out a system for prevention? The steps taken in an emergency situation is like disaster management. Instead of just dealing with the problem there has to be a holistic approach. Methods need to be revisited."

"Meetings have been held at the level of secretaries. We have given Rs. 1,150 crores to different states, 14,000 machines were provided last year & 50,000 machines have been pressed this year too," the government was quoted as saying by news agency ANI

"PM chaired a meeting in which the situation arising due to pollution in various parts of Northern India was discussed." the Prime Minister's Office tweeted.

The Prime Minister's Office (PMO) has set up a panel, headed by Niti Aayog vice-chairman Rajiv Kumar, to monitor air pollution in Delhi and draw plans to mitigate the problem.

The panel will submit a report to Prime Minister Narendra Modi in two weeks.