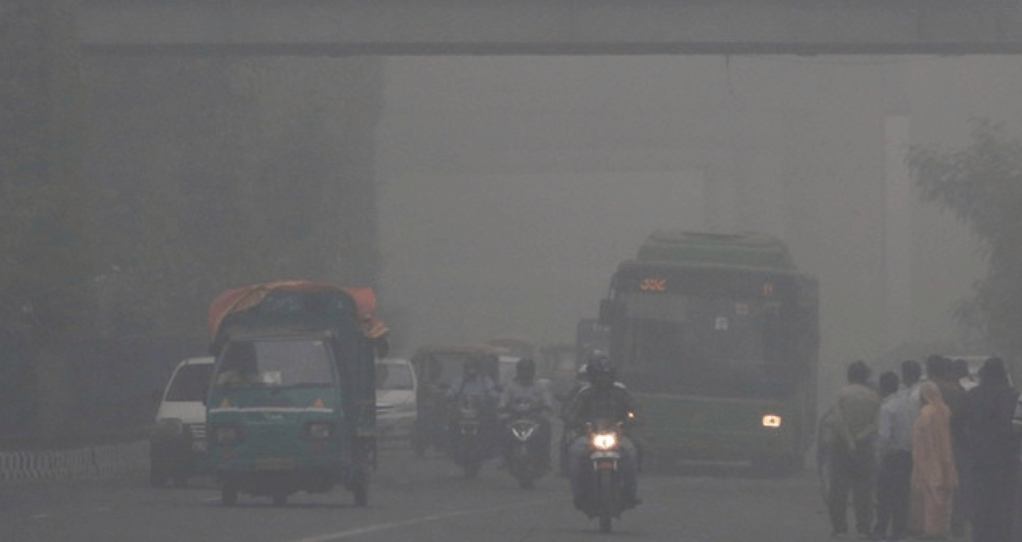 Delhi Air Pollution Update: SC halts construction, garbage burning
Delhil's 24-hour average AQI stood at 494 at 4 pm on Sunday, the highest since November 6, 2016, when it was 497.

A thick blanket of smog continues to envelop several parts of Delhi-NCR as the air quality dips to a three year low. Schools in the capital will remain closed till November 5, as a public health emergency was declared.

According to the Central Pollution Control Board (CPCB), the national capital's 24-hour average air quality index (AQI) stood at 494 at 4 pm on Sunday, the highest since November 6, 2016, when it was 497.

The Delhi government has implemented the "odd-even" traffic rationing scheme Starting at 8 am today.

Nearly 200 teams of the Delhi Traffic Police have been deployed to ensure compliance and around 5,000 volunteers have been trained to create awareness about the scheme.

"North India has been engulfed in smoke caused by stubble burning. Right now we can't do anything about that, but if we follow the scheme for the next 10 days, it will give some relief. It is for everybody's benefit," said Manish Sisodia, Deputy Chief Minister

The emergency measure, mandated under the Graded Response Action Plan, will be in place in Delhi-NCR for 12 days — till November 15.

"This is not the way we can survive": Supreme Court

Slamming authorities for failing to curb hazardous levels of air pollution in Delhi-NCR, the Supreme Court said that they have left people to die.

The Supreme Court said it will not tolerate this and will fix liability on the state governments.

A bench of Justices Arun Mishra and Deepak Gupta took serious note of crop burning in Punjab, Haryana and Western Uttar Pradesh and said it cannot go unabated every year.

"Can we survive in this atmosphere? This is not the way we can survive," the bench said.

"Delhi is choking every year and we are not able to do anything. Question is that every year this is happening," the bench said, adding, "It cannot be done in a civilized country".

The court has directed the Centre and Delhi government to work in tandem to deal with garbage issue — which is contributing to the pollution — on a war footing, and has ordered water sprinkling on roads to contain dust.

SC summons chief Secretaries of Punjab, Haryana, UP to appear on Nov 6

The Supreme Court summoned the Chief Secretaries of Punjab, Haryana and Uttar Pradesh to appear in court on November 6. People are losing precious years of their lives due to pollution, the court said Monday and slammed authorities for their failure to curb pollution in Delhi-NCR.

A bench of justices Arun Mishra and Deepak Gupta asked the Centre to call environmental experts, including from IIT, to the court

37 flights diverted from Delhi airport due to low visibility

Low visibility due to heavy smog also disrupted flight operations at the Delhi airport on Sunday, with 37 flights diverted to other airports and more than 250 departures and 300 arrivals delayed.

Due to low visibility at the Indira Gandhi International Airport (IGIA), 37 flights were diverted between 9 am and 1 pm to places like Jaipur, Amritsar, Lucknow and Mumbai, an airport official said.

Thousands of devotees offered prayers along the banks of the Yamuna river  in toxic foam to mark the end of Chhath Puja on Sunday morning. White foam was seen floating on the surface of the polluted water.

The devotees, who were almost knee-deep in the froth, did not get a full view of the rising sun due to thick smog covering the skyline of Delhi.

Drop in pollution levels due to wind speed

Though pollution levels in Delhi dropped marginally today morning due to a slight increase in wind speed but the air quality remained in the 'severe' category.

40% of Delhi-NCR Residents want to move to another city: Survey

A survey was done by the online platform “LocalCircles”, according to which over 40 percent of residents of Delhi and NCR want to move to another city because of bad air quality while 16 percent want to travel during the period.

The survey with over 17,000 respondents from Delhi and NCR region has found that 13 percent of residents believe that they have no option but to cope with rising pollution levels.

“44 percent of respondents said they were having health problems related to pollution but have not visited a doctor or hospital and only 14 percent of people said they have had no impact of pollution on their health,” according to the survey.

Meanwhile, the Prime Minister’s Office (PMO) on Sunday called for a review meeting on air pollution in Delhi and its surrounding areas.

A statement released by the PMO said that the Cabinet Secretary will be monitoring the situation with these three states on a daily basis. Chief Secretaries of the states have also been asked to monitor the situation in various districts round the clock.

“The three state governments have been asked to take special steps to counter the air pollution from tonight. Punjab and Haryana have been asked to send enforcement teams across districts to ensure that stubble burning is stopped immediately. They are also to talk to farmers and create awareness. Delhi has been instructed to take strict action against dust. This means that heavy penalties will be imposed at construction sites, which are emitting dust.” Environment Secretary C K Mishra told Indian Express.